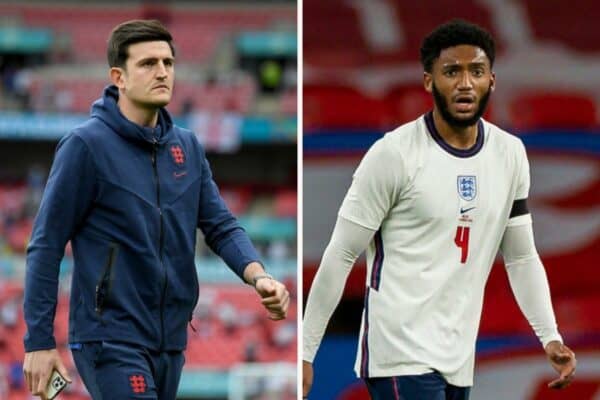 Man United‘s Harry Maguire was booed at Wembley on Tuesday night, leading Gareth Southgate, Jordan Henderson and others to speak out – but Liverpool fans are all asking the same question.

England hosted Ivory Coast on Tuesday night and emerged as 3-0 victors in a friendly that saw Jordan Henderson remain on the bench throughout the entire 90 minutes.

But the biggest story to emerge from the night was Maguire being subject to boos as his name was read out before kick-off at Wembley, with his first touch also receiving jeers.

After the match, the response from manager Southgate and his international teammates was swift, each condemning the “absolute joke” of the response by some of the crowd on Tuesday night.

But while the likes of Harry Kane, Jack Grealish, Declan Rice and Henderson all, rightly, condemned the reaction to the Man United defender, Liverpool fans were all left thinking the same thing.

Was this very same reaction just as strong for Joe Gomez when he was subject to boos at Wembley in 2019 after Raheem Sterling instigated an altercation and left Liverpool’s No. 12 with a cut on his face?

Sterling notably came out and said that it was “wrong” for Gomez to have been booed “for something that was my fault,” but there was a sense that there was not as emphatic of a response compared to Maguire.

And Liverpool fans pointed out the hypocrisy on social media:

It is interesting how a 22 year old Joe Gomez was assaulted by a senior member of the England National team, left with a physical scar, and then booed as a result, and it got quickly brushed over. But when Maguire gets a few boos it’s a national outrage. pic.twitter.com/IRreojuPud

Harry Kane’s instagram after Joe Gomez got booed on against Montenegro. “A perfect night” https://t.co/qxSvkEo6f3 pic.twitter.com/FvuI1JbgL6

I don’t mind being put right if I’m wrong here but where was this message after Joe Gomez was boo’d by England fans? https://t.co/cfN45TXPVa

The same ‘England til I die’ merchants are crying at a section of England fans for booing Harry Maguire, yet the whole stadium booed Joe Gomez for absolutely no reason whatsoever & they didn’t care…

Hate the culture of England fans. One of the reasons why I’m not part of it. pic.twitter.com/8KSPrXGETZ

Where was all the commotion when Joe Gomez was booed at Wembley?

I understand that Henderson is just fulfilling his role as vice captain but where was this outcry when they boo’d Joe Gomez for having the audacity of being unsuccessfully throttled by Raheem Sterling? https://t.co/ocO77o4ozv

Did he even write anything for when Joe Gomez got booed. Man's out here twerking for Uniteds captain. https://t.co/VdaMLdC1l9

Joe Gomez gets booed by England fans. Not a fucking peep from anyone. Wonder why….?

When Joe Gomez got booed & when Harry Maguire got booed.

They booed Joe Gomez for being assaulted by a teammate. Booing Maguire is one of the least offensive things that England fans have done in the last few years tbf. https://t.co/zYgabYMGKJ

Didn’t saying anything when everyone was booing Joe Gomez even when Sterling literally scratched his face did you? https://t.co/MmSWPg7Fe3 pic.twitter.com/ieSivc1XxS

It’s far from saying Maguire did not deserve the strong statements from his teammates, more that each player should be deserving of the same public support.

And it is important to note, Henderson did play a role behind the scenes in patching things up between Gomez and Sterling back in 2019 despite not yet having linked up with the England side at the time of the incident.