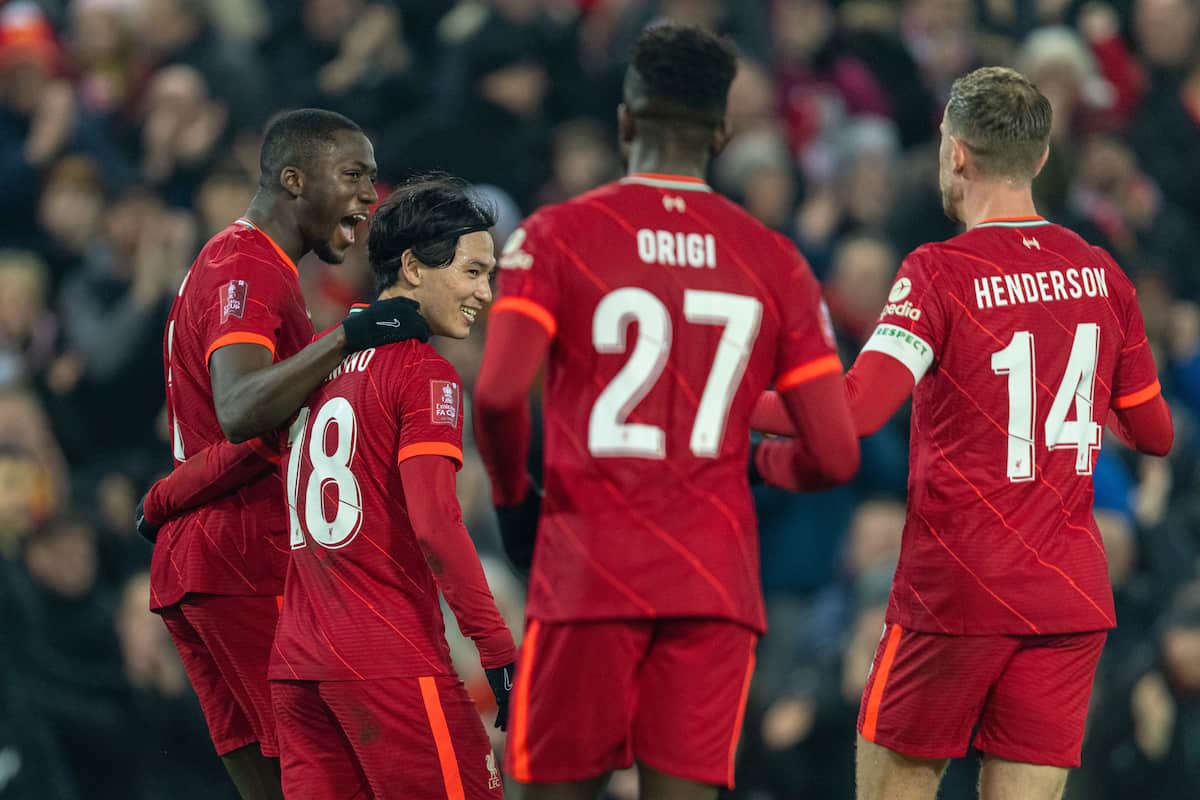 Liverpool have waltzed into the quarter-finals of the FA Cup for the first time under Jurgen Klopp, swatting aside Norwich City for the fourth time this term.

Some very wayward kicking in the first half – must be trying to make Caiomh look extra-good this week.

Beaten by Lukas Rupp’s fierce strike from range, then had to make a fine stop from Jonathan Rowe to deny an equaliser.

He’s not always known for enjoying comfortable evenings at full-back these days, but without a lightning-quick winger against him – or indeed a team with much possession – he was very good indeed.

Overran one or two dribbles as his brain forgot his legs’ age for a moment but otherwise really good in possession. Defensively excellent with some great positional interceptions.

Looked a bit like a dad turning up to play with some kids at some points.

Just strolled through it mostly, using the ball well, bullying attackers when they bothered to go near him and showing pace once or twice when needed.

Shepherding the ball out of play under pressure from Rowe was a particularly fine exhibition of his mountainous stature.

Other than a misplaced crossfield ball at the end of the first half, his first 45 minutes was very good indeed – covered when he needed to against runners from deep, won a couple of challenges which could have led to danger and passed out well.

Gomez could, however, have done more on Norwich‘s goal – he was slow to step out and allowed Rupp the space to shoot. 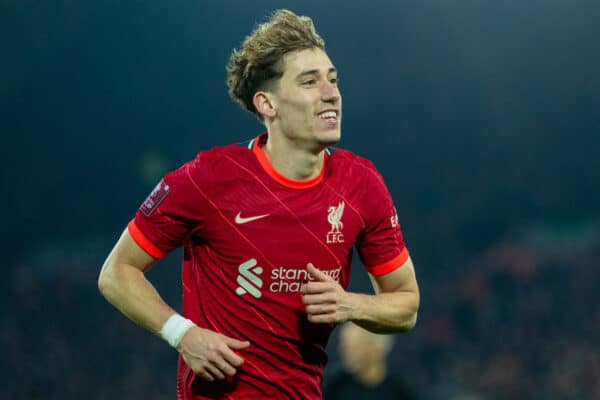 Decent without being his best, which isn’t a surprise after a while out of the team.

Overlapped loads of times to create crossing chances and cut-backs, while also having a decent battle on his hands at the opposite end of the pitch at times.

Lovely cross led to the opener. 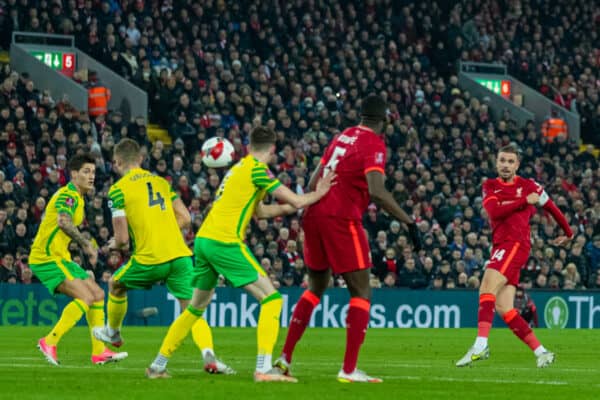 The skipper was on one in the first half!

A load of first-time passes, neat flicks and aggressive tackles high upfield, all nicely effective as Norwich couldn’t pass around the Reds’ press.

A bit shouty for (seemingly?!) needless reasons at times, and fired a decent chance over the bar. Replaced with the game looking in the bag.

The lesser light in a changed midfield; plenty of hard running and willingness, but never really anywhere near enough glimpses of his best attacking traits.

Overhit passes, a couple of non-crosses from good positions and an unfortunate strike against the outside of the post instead of in, having switched right to left after the break. 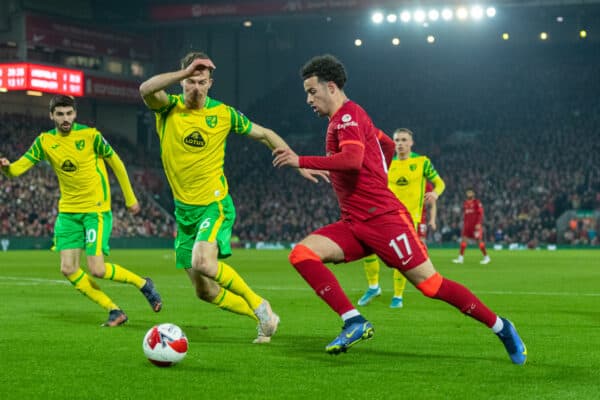 Had a magical 45 minutes and went off at half-time with an apparent thigh injury, which is a disappointment.

In that first half, though, he was exceptional – loads of flicks and skills, but all of them effective rather than for showboating reasons, while also efficient with his through-balls, one-twos and lots of tackling back.

Clipped the bar with a decent hit.

Takumi Minamino – 8 – Man of the Match

If we played the Canaries every week, our No. 18 would win the Ballon d’Or, the Golden Boot and the PFA Player of the Year!

Taki loves a goal against the dross, doesn’t he? It’s almost as though he’s a very decent squad option to have to call upon in specific games.

Two really well-taken strikes, both blammed in to give the ‘keeper no chance.

Wasn’t exactly a non-stop feature of the game but he had plenty of moments where he carried the ball or combined the attack neatly and the usual selfless tracking back was there too. 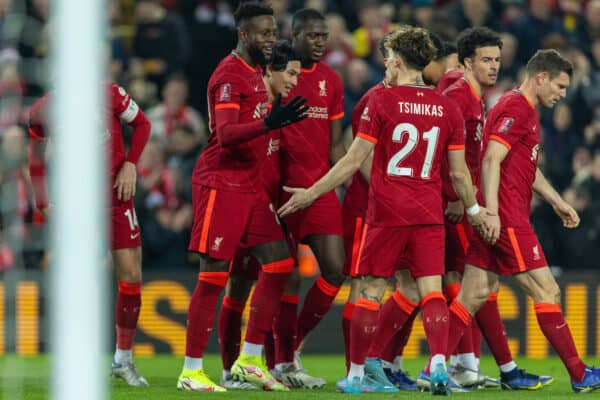 Looked as though he was enjoying himself plenty out there! Led the line well, some really good combination play and movement in behind the defence.

Didn’t always manage to beat his man or make the final pass, but important nonetheless in occupying defences and played a big part in the opener.

Industrious and annoying-looking to play against, Jota pretty clearly looked to be getting back to full sharpness in spells – while later in the game we could see him fade as he just lacks a bit of fitness.

It has been stop-start of late but some good one-on-one play and some great off-the-ball movement to leave him free if the ball had arrived are big positives to take forward. 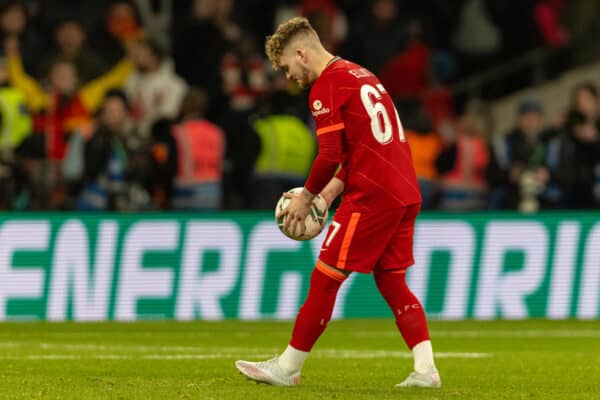 Tyler Morton (on for Henderson, 60′) – 6 – Neat. Tidy. Perfectly placed hair. Probably needs to mess that up a little next season.

Heavy rotation from the boss, leaving only the captain in place from the side which started at the weekend in the League Cup final.

It never really seemed a problem, and wasn’t – the Reds were in control throughout and did not at all look like giving up a couple of goals after taking the lead.

That Rupp strike made it a bit nervy maybe, so the boss simply responded with a couple of extra first-choice attackers.

He got to swap around a few players and bring on a youngster in Morton, so while this wasn’t a totally perfect outing, he’ll take the win to keep the run going and start prepping with the first-teamers for the weekend.