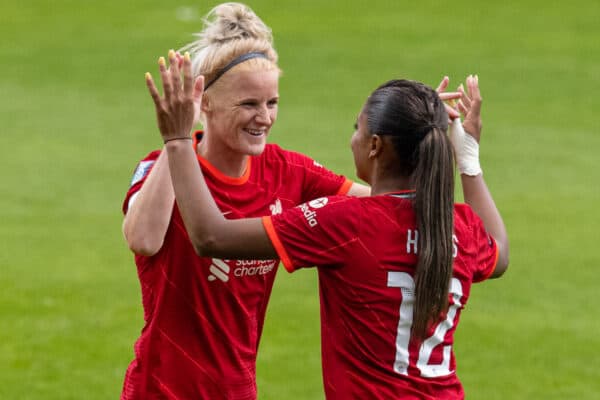 Liverpool Women are seven points clear at the top of the Women’s Championship and need only three more wins to their name to secure promotion back to the WSL.

Matt Beard’s side have been in formidable form this season, with 13 victories, one draw and only defeat on opening day to their name in the pursuit of promotion.

It has the Reds nicely positioned atop of the table with a seven-point lead, with Sunday’s latest win acting as yet another timely catalyst toward the season’s main objective.

Liverpool made the trip to fifth-placed Charlton and were tasked with a job requiring patience, with the breakthrough not arriving until only seven minutes were remaining on the clock.

After having shown glimpses of finding the all-important goal, it finally arrived off the head of centre-back Jasmine Matthews, with Taylor Hinds responsible for the delivery from the corner.

A beautifully timed lowering of the body and turn of the head sent the ball looping into the opposite top corner and brilliant scenes of celebration swiftly followed.

You couldn’t have asked for a better finish from that angle!

With 42 points after 17 games and just five remaining on the schedule, it is well and truly in Liverpool Women’s hands and promotion could be signed, sealed and delivered in three games’ time.

With a meeting with second-placed Bristol City on the horizon, Beard’s side could be crowned champions on the day of that fixture should they win on April 3 and have secured three points against Charlton and Durham.

With eight wins from the last nine league games, it certainly is not out of the realm of possibility and any further dropped points from Bristol will only move the timeline forward.

It’s exciting times for the club as a whole and a place back in the WSL is to be a huge step for Liverpool Women after two seasons in the Championship.