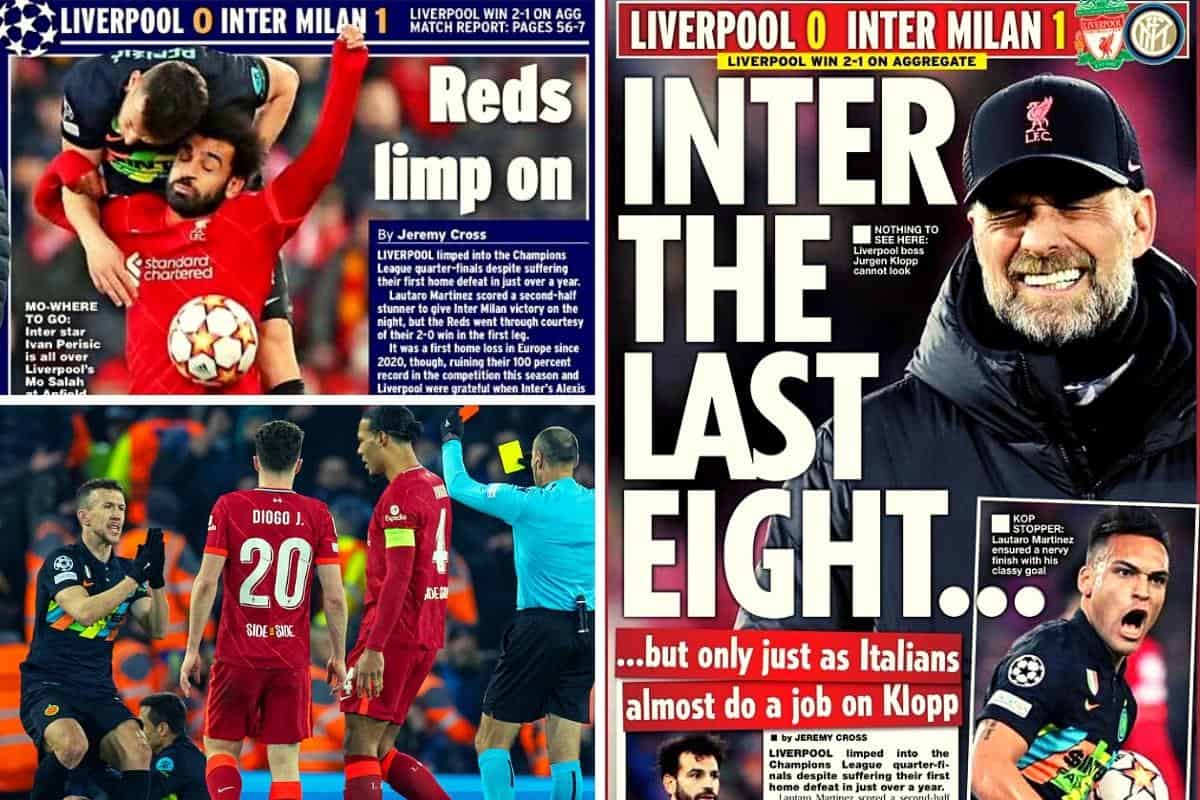 Liverpool reached the Champions League quarter-finals in unconvincing fashion against Inter Milan, with both positives and negatives dissected by the watching media.

The Reds hosted the Serie A champions leading 2-0 from the first leg, but they weren’t at their best, losing 1-0 on the night.

Jurgen Klopp‘s side hit the woodwork three times, via Joel Matip and Mohamed Salah, before Lautaro Martinez fired the visitors in front.

A red card for Alexis Sanchez almost straight away helped Liverpool’s cause, however, and they got the job done in the end.

Here’s a look at how the media reacted to the Reds’ progress to the quarters, despite a rare defeat.

It was impossible to deny that Liverpool’s performance was disappointing… 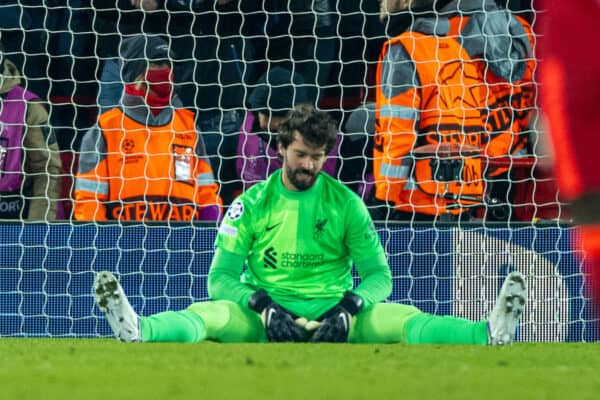 Goal‘s Neil Jones was unimpressed by the Reds’ showing:

“Jurgen Klopp will know his side can play better, much better. They started both halves sloppily, and were most definitely ruffled by the aggression and intensity of Inter’s pressing at times. Sanchez, until his dismissal, and Vidal were the chief menaces.

“Liverpool, knowing they could afford to lose and still progress, were not themselves. They did not pass the ball crisply and were caught out in the centre of the field too often.

“Fabinho struggled, and none of their forward players, Jota, Salah and Sadio Mane, carried the threat we are used to.”

This Is Anfield felt the Reds struggled to deal with Inter’s gameplan:

“The Italian champions had made it difficult for Liverpool in the first leg at the San Siro, but Jurgen Klopp‘s side were eventually able to show their class to take a 2-0 lead into this game.

“Inter once again had done their Liverpool homework and gave the Reds little time on the ball to get things going in attack.

“They also appeared to have a plan to work the ball past Liverpool’s press with the help of goalkeeper Samir Handanovic, but that’s easier said than done.

“The windy conditions didn’t help either side’s passing and build-up play. If the match needed to be broken up it might have helped Inter, but they also needed some kind of stability themselves to get back into the tie.”

Sam Wallace of the Telegraph wondered if the result could affect Liverpool’s feeling of invincibility:

“It had been a year exactly since Jurgen Klopp’s players last lost at Anfield, an unlikely defeat in the league to Fulham, and although this next one did not halt their progress into the Champions League quarter-finals it may well play on the mind of the Liverpool manager a little longer.

“For around half an hour, Liverpool were up against the ten men of what was certainly a determined and liberated Inter Milan side who were prepared to risk everything to get back into this tie.

“At the end, it was Klopp’s players shutting down attacks, if not clinging on. Without the parity of numbers, Inter could not make the pressure overwhelming.

“That first-leg win in Milan was enough although in the end, it felt a little too close for a club of Liverpool’s power in this competition – even if it was against the champions of Serie A.”

Some individuals were assessed in different lights…

Ben Husband of the Mirror lauded Trent Alexander-Arnold‘s performance, particularly the defensive aspect of it:

“With Gareth Southgate set to name his England squad in the next week or so, Alexander-Arnold proved that any myths over his lack of defensive abilities have been greatly exaggerated.

“Liverpool may have shipped a goal against Inter, but Alexander-Arnold put in an impressive display at both ends of the pitch.

“On two occasions in the first half, it was his positioning which nullified attacks, while his delivery in the other box was unsurprisingly, fantastic.

“The battle between him and Reece James over that berth is set to go all the way to Qatar, but on this form it’s difficult to not include the Liverpool man.”

“The Portuguese forward was free-scoring prior to his injury earlier in the campaign but has struggled for top gear since then.

“Here he was well on the fringes of the game for the most part, and when he did get involved it was regularly detrimental to the team’s progression: missed control, wayward passes and a number of fouls against him, including one which saw Hakan Calhanoglu hit the target with a free-kick.

“The problem isn’t so much a minor loss of form, as the potential to lose his place: Roberto Firmino is back to full fitness and new signing Luis Diaz has hit the ground running, very quickly a fan favourite and a player who is making the team tick in attack.”

It is still positive progress and the quadruple is still alive, though…

Matchett made sure to focus on a positive:

“So Liverpool’s unbeaten run is over, but the trophy charge remains very much on.

“Into the last eight they progress in Europe, just as is the case in the FA Cup – and the other domestic trophy is already in the bag.

“Few sides will be keen to draw Klopp’s team in the quarter-finals, even with this surprise result, and even if they are not speaking out loud about it, the Anfield staff and players will doubtless be targetting another European Cup this season.

“They won it three seasons ago and are among the biggest favourites to do so this year – perhaps they’ll feel only a domestic rival can seriously oppose them right now.”

Husband also touched upon the potential for more silverwar this season:

“As Liverpool clear each hurdle it is worth taking a step back and assessing just what they are trying to achieve.

“Carabao Cup in the bag, in the last eight of the Champions League and the FA Cup and the Premier League title race set to go down to the wire, it promises to be a remarkable end to the campaign.

“Inter Milan came to Anfield as the Italian champions and had they not come up against Liverpool, would have likely continued their own European adventure.

“The Reds weren’t at their best, but it’s another step closer to sporting history and although the odds are still up against them, it would take a wise person to bet against them.”

Finally, the Daily Mail‘s Ian Ladyman was quick to avoid giving the night a negative stance:

“So Liverpool are through to the last eight of their favourite competition once again. They largely have their 2-0 first leg victory at the San Siro thank and now have a first home defeat in a year to reflect on.

“But that is nothing more significant than a statistical anomaly. Liverpool’s momentum in league and across cup competitions remains.

“Jurgen Klopp’s team were not at their best here but there is a resilience about them at the moment and it was largely this that got them through on night when conditions made it difficult to play consistently productive football.”