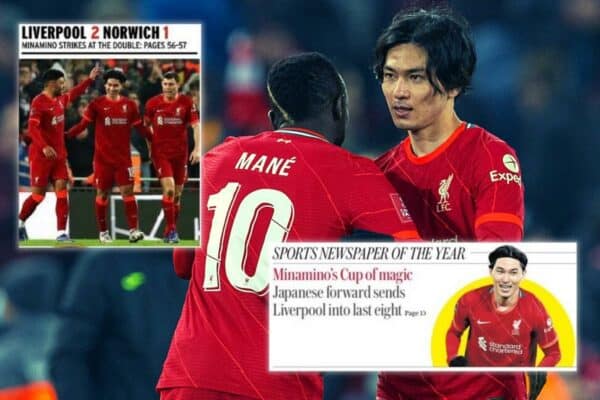 Unsung hero Takumi Minamino made the headlines after his double in Liverpool’s 2-1 victory at home to Norwich, as talk of an unprecedented quadruple intensifies.

The Reds hosted the Canaries in the FA Cup fifth round on Wednesday night, with Minamino dispatching two excellent first-half finishes to put his team in control.

It wasn’t a classic cup tie from that point on, with Lukas Rupp’s effort making for a nervy ending at Anfield, but another win was secured.

Here’s a look at how the media reacted to Liverpool’s latest triumph.

The Independent‘s Carl Markham highlighted Minamino’s influence in the cups:

“Cup specialist Takumi Minamino kept Liverpool’s quest for an unprecedented quadruple on track with both goals in a 2-1 win over Norwich as Jurgen Klopp reached his first FA Cup quarter-final.

“The Japan international has made the majority of his starts in knockout competitions and in a team registering 10 changes from the one which won the Carabao Cup at Wembley on Sunday his was an influential one.

“Minamino now has seven goals and one assist in eight cup games this season and since the start of 2020 the 27-year-old has scored more than twice as many goals in domestic cup competitions (nine) than any other Liverpool player.”

Josh O’Brien of the Mirror is impressed by the forward’s growing importance:

“The Japan international has struggled to impose himself on games at times during his Liverpool career, but was at the heart of all things good for the hosts on Wednesday night.

“Constantly showing for the ball from the first whistle, Minamino’s deft touches and relentless energy allowed the Reds to run the Canaries ragged at times.

“The brace marked the 27-year-old’s eight and ninth goals of the campaign across all competitions, hardly a bad effort for a player starved of game time this term and may have played his way into Klopp’s plans for the upcoming Premier League run-in.”

“The goals were Minamino’s sixth and seventh in six starts in the domestic cup competitions this season.

“He played an important part in Liverpool’s run to the League Cup final, scoring four goals and adding one assist in the first three rounds.

“He didn’t start the final itself, but will now get the chance to make a great contribution for his team in the FA Cup – and hopefully get to play at Wembley eventually.

“He scored against Cardiff in the previous round, and added two more to his tally here in a Man of the Match performance, with Klopp saying post-match that it was ‘the best he’s played for us’. The second was especially memorable and put the tie to bed before half-time.

“It shows the importance of having such a player in the squad who may not be in the best XI, but can still contribute to potential success in the many competitions a world-class club will remain involved in.”

Andy Hunter of the Guardian feels Minamino deserves another trip to Wembley for his efforts:

“The Liverpool goalscorer was an unused substitute at Wembley but his contribution to both domestic cup runs this season has been impressive.

“Minamino scored four goals in Liverpool’s victorious Carabao Cup campaign, including the vital stoppage time equaliser against Leicester in the quarter-final, and also scored in the FA Cup fourth round win over Cardiff.

“He may get a second bite at Wembley on Liverpool’s current form.”

It’s impossible not to mention the quadruple at the moment…

The Mail‘s Dominic King feels there is every reason for such confidence:

“Jurgen Klopp won’t entertain the idea of pursuing a quadruple and making history but that message hasn’t reached Liverpool’s players and fans.

“With the Carabao Cup safely in possession, Liverpool moved stylishly into the FA Cup quarter-finals with a display against Norwich that exuded authority and command and had those on the Kop singing about visiting Wembley twice. They have every reason to dream those dreams.

“Was this Liverpool’s most outstanding performance of the campaign? No, certainly not. But what left you thinking that it might — just might — be possible to go to a place that no other side has done is the professionalism and dead-eyed application they are taking into each contest.”

O’Brien was of a similar thought process:

“Remarkably, Liverpool could still potentially win all four competitions with just under three months of the season left to play.

“With the first piece of silverware on offer already in the bag, Liverpool have kept their FA Cup hopes alive and kicking with this latest win.

“Liverpool’s title rivals Man City also remain in the competition, as do third-placed Chelsea but the Reds currently look as good as any potential opponent.”

Chris Bascombe of the Telegraph was giddy at the thought of more silverware:

“There was a Kop chant in the 1980s which, for a time, was aired as often as the club anthem.”

“‘Put the champagne on ice, we’re going to Wembley twice.’

“Despite multiple attempts, some of the greatest Liverpool teams struggled to live up to that promise, League Cup wins often followed by FA Cup exits.

“Even at a club with so many historic feats, this Liverpool team is on the point of venturing into new territory, now only one more win from another Wembley date in this year’s semi-finals.”

Finally, the Liverpool Echo‘s Paul Gorst eyed up a special end to the season:

“There was to be no hangover from their Sunday celebrations; Liverpool are still very much up for the cup.

“The Reds just keep rolling on.”