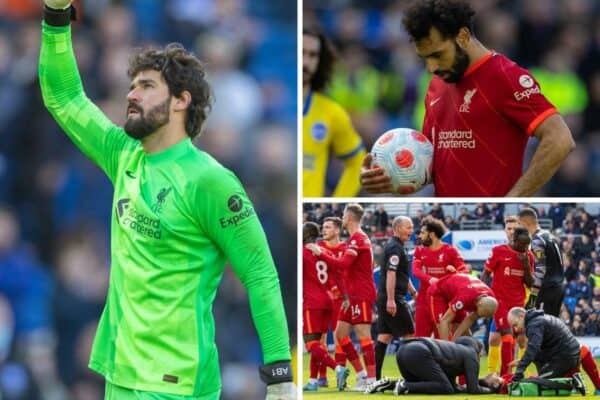 The good, the bad and Reds’ XI vs. Arsenal? – Last word on Brighton 0-2 Liverpool

There were positives galore to take from Liverpool’s 2-0 win over Brighton on Saturday, but the trip to Arsenal was also a point of focus.

The Reds knew that victory was imperative at the Amex, in order to keep up the pressure on Premier League leaders Man City.

The excellent Luis Diaz headed Liverpool in front to ease some early nerves before Mohamed Salah buried a penalty to doubled the Reds’ advantage after the interval.

Jurgen Klopp‘s men could even be top of the table by this time next week, should City lose at Palace on Monday and they win away to Arsenal on Wednesday.

FLOYD: First and foremost, the result and the three points after another professional performance in which it felt like we didn’t leave third gear.

In recent weeks, it has felt like a conscious effort to conserve energy and go about winning games exerting the least amount of energy possible and that can only be a good thing given we’re still challenging on three fronts.

At this stage of the season keeping the pressure on Man City is the priority and this result means they go into a tough away game under the lights against Crystal Palace knowing defeat opens the door for us to go top on Wednesday.

Given their poor record of chasing, both when behind in a game or across a title race, that can’t be understated.

The other positive is Diaz.

After signing him in January I thought anything he provided between then and the end of the season would be a bonus.

I can’t say I expected him to not only look at home in our elite front line but outperform them at times.

I don’t think his decision-making has been the best at the final point but when that improves as he gets to know his team-mates better, it will be frightening how good he could be.

I will go as far as to put in an early shout for him to be Player of the Year next season.

Another positive is the form of the oft-maligned Keita. As he grows in fitness and rhythm, he’s moving away from the midfielder I was expecting and is turning into Gini Wijnaldum 2.0.

His ability to control a midfield is growing along with his confidence and he is starting to look like a player who now believes he should be part of this team.

HENRY: As Floyd says, it was a professional three points, and once they took the lead, the win rarely looked in doubt.

Diaz was magnificent at times and really does look like he could become one of the signings of the Klopp era, which is high praise indeed.

I thought Alisson, Trent and Matip were great, too – what a pass by the latter for Diaz’s goal! – while Keita continued his really impressive recent form.

I’m so pleased for him because he seems such a good lad and has taken some unfair criticism during his time at the club.

JACK: This game would have been much hairier were it not for Alisson, who made a huge save towards the end and came off his line for vital interventions.

It is no surprise to see him and Ederson way ahead in the race for the Golden Glove, given how strong both Liverpool and Man City‘s defences are.

But, in my eyes, Alisson is a league above his compatriot.

He’s by far the best ‘keeper we’ve had in my lifetime, and as Klopp said post-match: “He should not have to show it in each game, but he showed it again.”

FLOYD: The one negative that springs straight to mind is Salah going off with a knock.

I know Klopp said he doesn’t think it’s too serious, but to go both down for treatment and then have to go off means it is a worry.

Salah’s injury history is exceptional, however, so I hope it was just a precaution.

Outside of that, it is hard to have too many gripes given the run we had been on up to the Inter game in midweek.

Having said that, it feels like we’re seeing more slow starts than we’re used to, starting games with sloppy passing and giving the opposition early encouragement.

It was the same against Brighton for the first 15-20 minutes. They were able to find attackers between our midfield and defence in the same way they have in previous games, creating positive opportunities for themselves, albeit without capitalising.

It was the same at the start of the second half, resulting in a good chance for Leandro Trossard, although he blazed over and it may well have been ruled out for handball by Neal Maupay.

I may be in the minority, but I don’t think Mane up front is working particularly well for him or us as a team.

He hasn’t been bad by any means, but has a tendency to take a heavy touch back into traffic and hold the ball for too long, causing our attacking play to suffer.

One of the other slight issues is that Diogo Jota hasn’t scored a goal since he notched two in the win against Leicester back on February 10, so it is a bit of a conundrum for Klopp as to whether he sticks or twists.

HENRY: I totally agree with Floyd about the slow starts to games – it seems to happen so often, so much so that I’m convinced we concede a corner in the first minute of every home match!

It is no great issue, but there are times when they’ve been a little lucky not to go behind early, suddenly making their job far harder.

The VAR decision was absolutely staggering – as Jamie Carragher said during the game, if the ball goes wide then Sanchez is sent off, 100 percent.

It’s ludicrous, but frankly, I expect nothing less from the most incompetent collection of officials I have ever seen.

I thought Salah was well short his best, too, despite his goal, and it does look as though he is both tired and a little distracted.

Here’s hoping the injury is nothing serious, but a night off at Arsenal might not be the worst thing in the world.

JACK: Floyd and Henry have covered the two main negatives for me: Stuart Attwell had a shocker and Salah’s injury is a big concern.

I’d like to put forward a minor gripe of mine, in that Klopp turned to Jota rather than Roberto Firmino as Salah’s replacement.

Jota seems to be struggling for confidence, and only time on the pitch can improve that, but after six games out, Firmino would surely have benefited more from those minutes at 2-0 up.

And what’s your XI vs. Arsenal?

FLOYD: Klopp’s rotation has been spot on for the last few weeks and it may continue here, although with it being followed by an FA Cup weekend, we could see fewer changes than usual.

The dovetailing of minutes between Keita and Thiago has been outstanding and I would continue with that.

The aforementioned conundrum with the forwards will leave the manager with a tough decision, but with Jota having scored six goals in six appearances against Arsenal – a goal every 61 minutes he’s played against them – I would be opting for him.

With Henderson departing early against Brighton I would put him in again and save the likes of Curtis Jones and Harvey Elliott for the Forest game at the weekend.

HENRY: I concur with what Floyd has said, assuming Salah is available, but would go Mane over Jota, despite his record against Arsenal.

I think the rotating of Thiago and Keita is working really well – I’m not totally convinced it works having them both, given they are both diminutive and not the quickest – but Naby should feel unfortunate to miss out.

Henderson is having a worse season, but I still trust him more to deliver in the biggest games, through a mix of experience and leadership.

JACK: Personally, I’d assume that Salah is out for this one, at least as a starter, which should give Jota that chance to recapture his spark.

An unchanged back line is almost certain, while I expect both Fabinho and Henderson to start, likely alongside Thiago – with Keita, Elliott and Jones all options for the FA Cup.

If Salah is out, it’s got to be Mane, Diaz and Jota in attack.