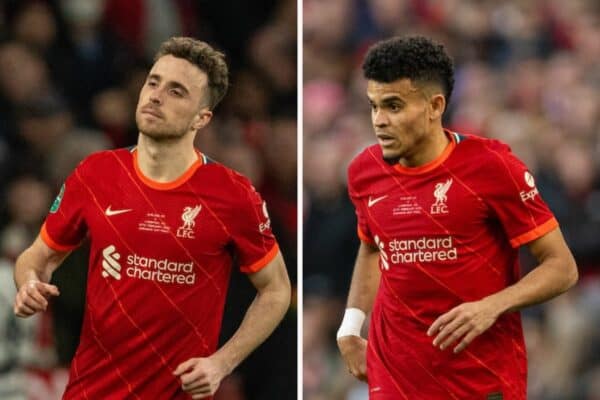 Jurgen Klopp has two big decisions to make for his team selection against Man City in the FA Cup semi-final at Wembley on Saturday.

Klopp has admitted ahead of the game that a “couple of positions” didn’t play well against City last Sunday, urging his side to show their best this weekend at Wembley.

The boss’ team selection and rotation against Benfica in midweek signalled a lot about those who perhaps didn’t perform best and who will come back into the side after having somewhat of a break.

Both full-backs, Virgil van Dijk, plus Fabinho and Thiago in midfield and Sadio Mane and Mohamed Salah will come back into the starting lineup.

Add in Alisson Becker in goal and you have eight of the 11 already.

Ibrahima Konate is likely to partner Van Dijk, with it extremely unlikely that Joel Matip will start three high-intensity games inside a week.

Option 1: Naby and Jota in

Thiago, Fabinho and Naby Keita started the away leg vs. Benfica and looked like a superb midfield for the most part.

Jordan Henderson has started the two games since, at City and at home to Benfica. The captain was withdrawn for the last half an hour on Wednesday night, which could hint at his inclusion on Saturday.

But there is the option to return to the Fabinho–Thiago-Keita midfield for Saturday.

While upfront, this option sees Jota start in the middle, as he did at the Etihad – if he can brush off the knock he suffered vs. Benfica.

Option 2: Henderson and Diaz in

The other option sees Henderson get the nod in midfield, with Luis Diaz on the left of the attack.

The Colombian started vs. Benfica but was withdrawn on 66 minutes, perhaps to keep him fresh for the trip to Wembley – where he excelled against Chelsea in the League Cup final.

Speaking ahead of the match, Klopp has noted Wembley’s pitch size and large spaces, perhaps hinting at Diaz’s suitability for the fixture.

Of course, if Jota isn’t deemed fit, then the Diaz option becomes even more viable. Although, we perhaps shouldn’t rule out Roberto Firmino starting in that case – but the Brazilian was the only one of the five attackers to play the full 90 vs. Benfica.

Mane, meanwhile, did well in the central role late on vs. City last week and similarly in the League Cup final.

Which lineup would you go with? Let us know in the comments.