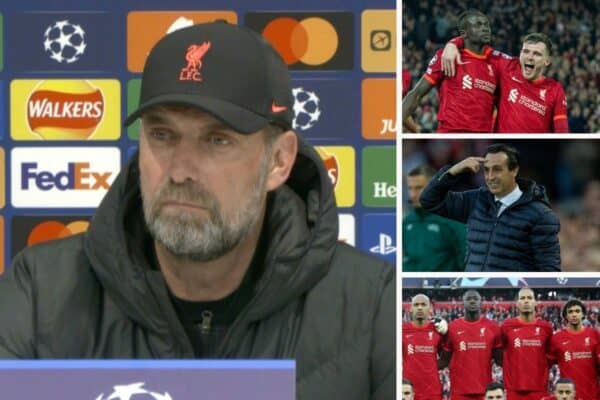 Jurgen Klopp was at pains to insist it is only half-time in the Champions League semi-finals, after watching Liverpool coast to a 2-0 home win over Villarreal.

It is a cliche, but it is a cliche for a reason. Though Liverpool have taken a 2-0 lead in their semi-final, they still have a job to do at El Madrigal.

That was the message Klopp was eager to hammer home as he opened his press conference.

“The full work is left to do. Nothing happened yet. That’s how it is,” he said.

“There’s nothing to defend, if you do that you give immediately all the advantages you might have had before away.

“We go there, there will be a tricky atmosphere for us, obviously different to tonight.

“These [Villarreal] players, this coach, they fight for it with all they have.

“What I like, that everybody could see, is we fight with all we have.

“If they beat us with a result that brings them to the final, they deserve it, and if not, then we deserve it.”

Sadio for the Ballon d’Or?

Sadio Mane scored the second goal of the night as he started up front again, taking his tally for the season to 20 and equalling Didier Drogba’s record for the most scored by an African player in the Champions League knockout stages.

It has been a landmark year for Mane so far, after a difficult start to the season, and Klopp was asked about his prospects of winning the Ballon d’Or.

“I have nothing to do with the Ballon d’Or nominations and all these kinds of things. I don’t understand it really 100 percent.

“He’s world class and played again a really good game for us.

“But I have no idea, I don’t know exactly how you come with that question when the season isn’t even over.

“Historically, you have to win something to win the Ballon d’Or, I think most of the time it was like this.

“If you are not Messi or Ronaldo, you have to win probably the Champions League – which we didn’t do yet, so give us a few more weeks then we will see where we end up.

Strangely, despite only being on the pitch for 18 minutes, Naby Keita was the subject of a post-match question.

It was put to Klopp that the No. 8 is enjoying his best season yet for Liverpool, to which he agreed.

“He has his best season because he’s been fit for the longest period,” he said.

“He’s an outstanding player, that was always clear. He played for us, even in other seasons when he was not that consistently fit, incredible games.

“If you look back and watch our big games, you will realise how often Naby was on the pitch in these games.