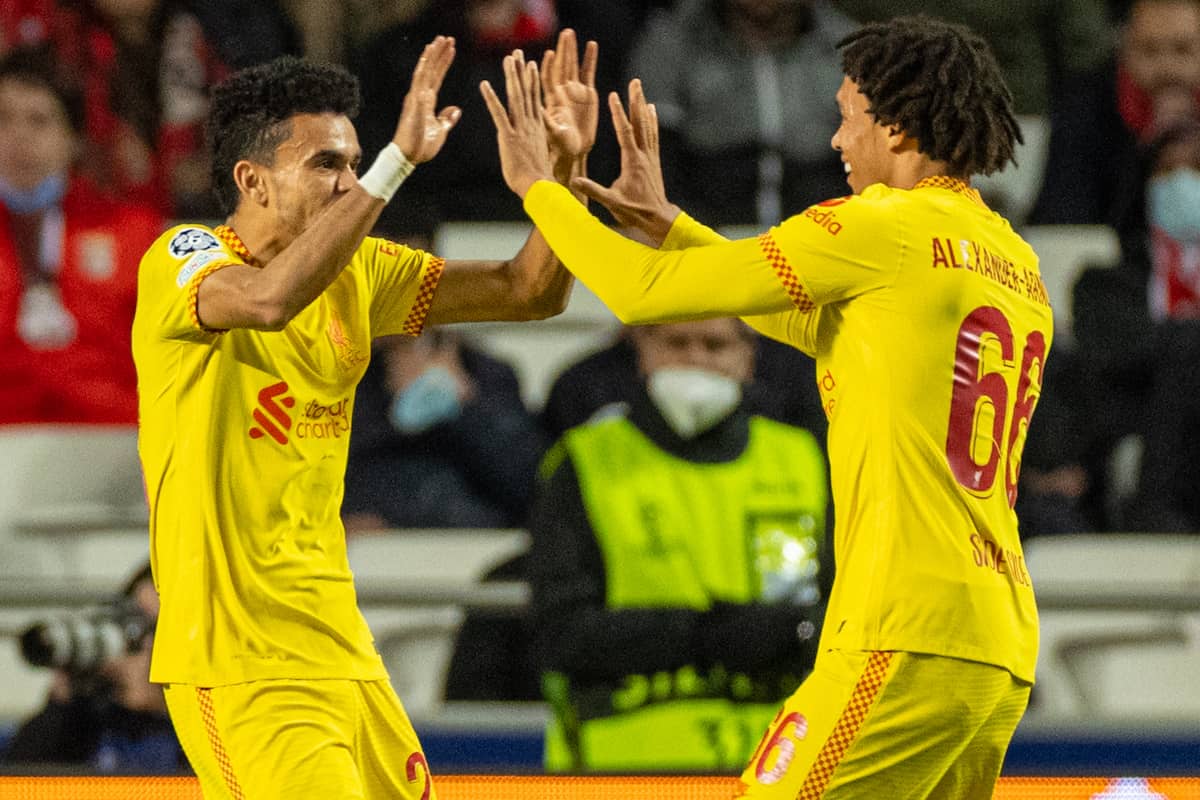 Liverpool earned a first-leg lead at Benfica after a brilliant first-half performance – but the game wasn’t without its scares until Luis Diaz wrapped it up.

NFT midfield in place at last 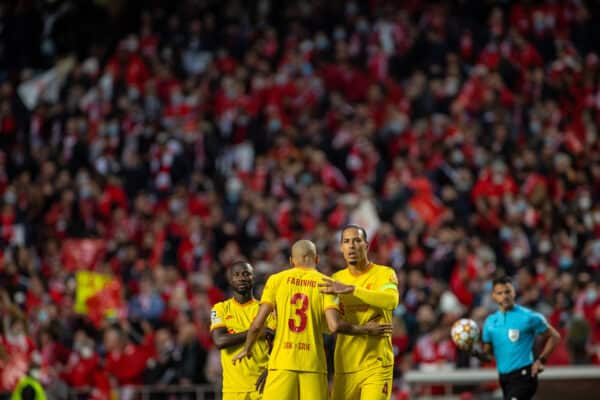 At last, many fans’ deepest, darkest desires were met by Jurgen Klopp: Naby Keita, Fabinho and Thiago together in midfield from the start.

We’d only seen them for a few minutes previously, but in they came to very good effect at the Luz.

On the ball, both No. 8s were a little loose early on, but both also had some magic moments and through balls – Keita’s to Diaz for a one-on-one being the pick.

Naby should have scored a header too, but getting into great areas repeatedly was a huge positive.

More important for the midfield is their off-ball work and this trio excelled.

Direct challenges saw all three come out on top repeatedly, while together they worked well at tracking back, following runners from deep and bringing the ball out of defence.

One of the only concerns for Jurgen Klopp would have been some big spaces in the first half which Benfica frequently sprinted through on counters, but there was never any real danger arising from them.

Second half? Different story, and the trio was broken up on the hour. Draw your own conclusions as to why; a lot went down in that 15 minutes.

Diaz and an old rival 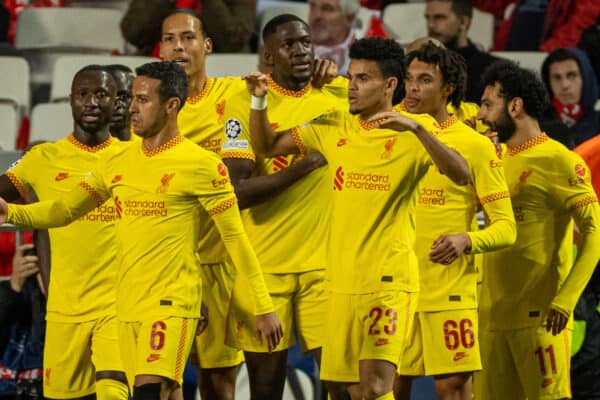 Luis Diaz: not the favourite person of the home crowd.

The former Porto man was in for whistles and jeers as soon as kickoff saw the ball goes his way, but he’s used to that and seemed to be perfectly happy to join in the destruction of Benfica’s defence.

His assist was simple, elegant and perfect – many forwards would have taken the one-on-one opportunity themselves, even in the air and with an onrushing ‘keeper.

Given what happened to him at Brighton not too long ago, some might even have bottled it altogether. 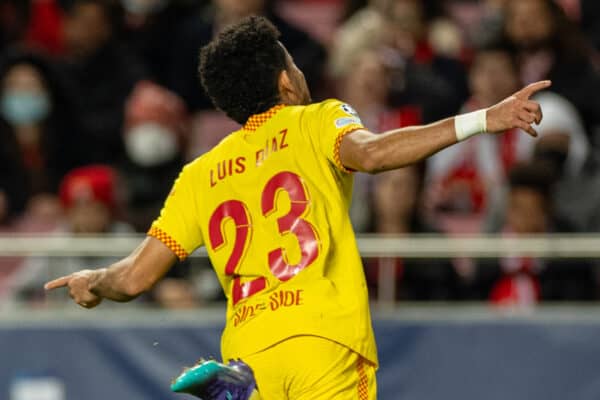 Great vision and execution as well as selflessness, and the tie looked rather more comfortable for a stretch.

He looked really keen to get on the scoresheet and there was plenty of well-deserved joy and fire from him when he rounded the ‘keeper to notch the third.

Big Ibou and a helping hand from Everton 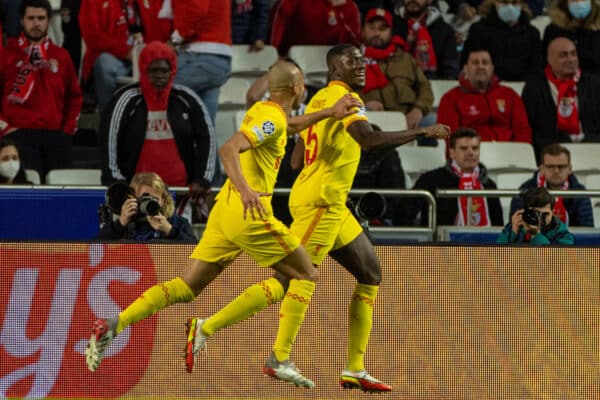 You can always count on Everton for a smile one way or another, right?!

This time it was in the person, not the team, as the attacker tried to mark Ibrahima Konate on a corner and was found massively wanting – although, in fairness, our No. 5 is about eight feet taller than him and three times as wide.

It was a massive header from Ibou, powering down and in for the opener, but even that came after two great defensive moments.

One showed his superb athleticism, powering into overdrive to catch, overtake and outmuscle Darwin Nunez, while another was all about the technical proficiency he has, covering a through ball to protect Alisson and clear well.

Twice more he bested Nunez and Goncalo Ramos with great recovery runs and a well-timed toe – but mirroring, or maybe enforcing, the second-half dropoff was his big, bad moment after the restart.

Konate should have made a routine clearance when the ball came from the right, but slightly off-balance and using his left foot, he totally missed the ball and Nunez pounced.

There were a few nervy moments and unnecessary fouls from the defender straight after, before he again settled for the final 20 or so.

The entire game was a reminder of his enormous talent and promise, but also a pointer as to how he has further to go to realise it, with consistency and concentration hugely important tenets in a defender’s armoury at Anfield.

Perfect half, but not sustained 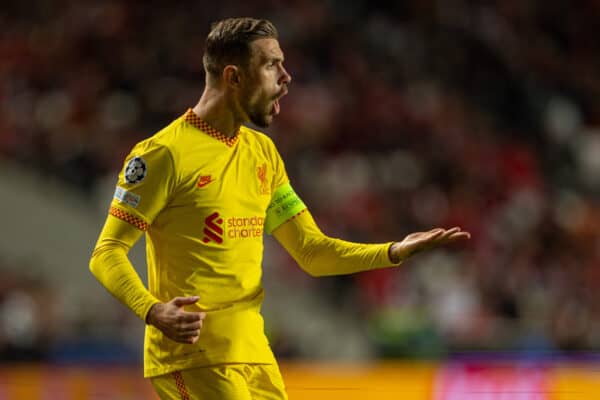 The first 45 minutes were monstrous. There’s no other word for it.

It was unquestionably one of the best halves of the season, at least since Old Trafford, with the Reds netting twice and having at least the chances to add a couple more.

As happy as Klopp would have been with that half, the start of the second was far more sloppy and slow. Konate’s error and subsequent losses of possession gave the home team a goal, some momentum and way too much hope.

It lasted, to the credit of the team and subs, about 15 minutes – then control and domination of territory were re-established.

A full 90 on top would be nice, but is unrealistic at this level of the game. Away from home, first leg and ahead is about as much as we could ask or expect for. 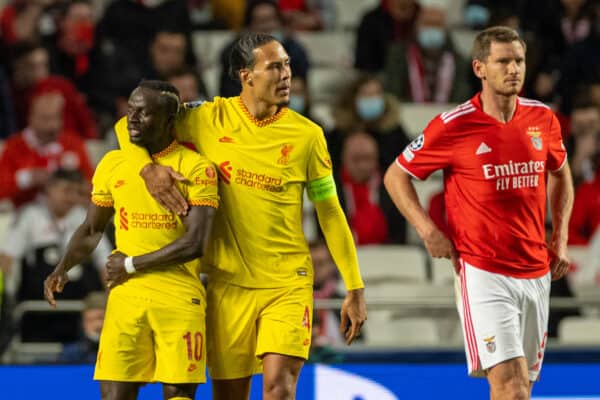 Benfica twice, Man City twice – it’s a hell of a run of games we’ve got, with United and Everton to follow.

One game at a time though, Reds.

What the result does here is keep us in the hunt for a semi-final berth, nothing more.

But what the performance might do as a whole is serve as a well-timed reminder that Liverpool, however good they might be in one part of a game, have to maintain the level to take victory.

Man City will be a lot tougher than Benfica, you’d expect, but a showing similar to that of the first half might just be enough to turn the title fight on its head.