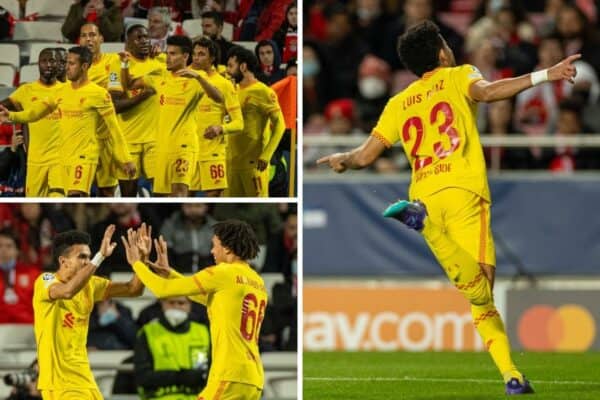 Liverpool had to weather a storm after seeing their performance level drop, but their quality shone when it needed to to take a 3-1 advantage over Benfica back to Anfield.

The journey to the Champions League semi-final started in Lisbon for Jurgen Klopp‘s side, with Liverpool able to take a fully fit squad along with them.

The manager was able to rotate, making six changes from the win over Watford, and the freshness made itself known as the Reds dominated the first half.

Ibrahima Konate made sure it was reflected on the scoreboard with a thumping header, marking his first goal for the club in style as he ran off toward the corner flag.

Fabinho‘s knee slide was a little less gracious than his teammate, but there were plenty of smiles for Ibou and an early lead.

Then came a goal that epitomises this side, winning the ball back high up before Trent Alexander-Arnold expertly picked out Luis Diaz who, in turn, laid on Sadio Mane for a simple finish.

And the last two to touch the ball before the No. 10’s finish rightly took time to celebrate with one another.

It’s still hard to believe that Diaz has only been a Red for just over two months.

Klopp had plenty to smile about until his side came out for the second half and they then had to weather a storm, allowing the game to get away from them.

Darwin Nunez pegged one back to make it 2-1 as the hosts grew in confidence, only for Diaz to add one more touch of quality as he rounded the ‘keeper to restore the two-goal buffer.

Check out those dance moves!

It was all love from Diaz, but the Benfica supporters certainly showed theirs a little differently…

While not a consistent performance across the 90 minutes, it is a result that takes Liverpool one step closer to a place in the semi-final with a job still left to do at Anfield.

Before then, there’s a ‘little’ trip to Man City that awaits in the Premier League and that will have Liverpool’s full attention – another big week ahead, Reds! Embrace it.