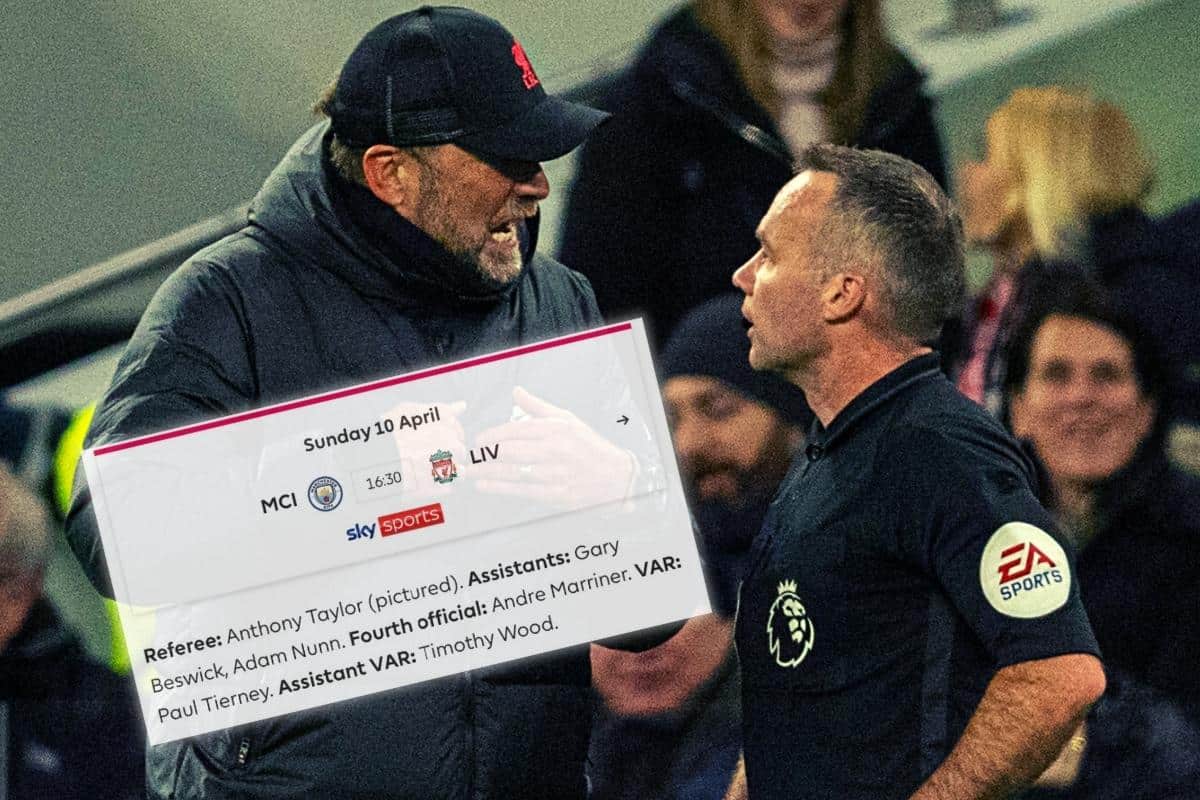 The match officials for Liverpool’s all-important title clash with Man City on April 10 have been confirmed, with fans furious at the appointments for ref and VAR.

The Reds head to the Etihad on Sunday looking to take a huge advantage in their pursuit of the Premier League title, with only a point separating them and City.

Having closed a gap that was, at one stage, as wide as 14 points, Liverpool are still in with a chance of sealing a quadruple this season, with hopes of more silverware in the league, Champions League and FA Cup.

City and Liverpool are, undoubtedly, the two best sides in England, and as such, the highest standard of officiating is required this weekend.

Unfortunately, many supporters have been left frustrated after the Premier League confirmed Manchester-born duo Anthony Taylor and Paul Tierney will be referee and VAR respectively.

Andre Marriner will be fourth official, with Gary Beswick and Andy Nunn linesmen, while Timothy Wood will support Tierney in the VAR booth.

Tierney has become hugely unpopular with Liverpool fans, along with Jurgen Klopp himself, who told him “I have no problems with any referees, only you,” after an abysmal showing in the 2-2 draw with Tottenham in December.

Taking to social media in reaction, supporters have widely criticised the appointments…

Manchester’s Paul Tierney is on VAR.

Biggest game of the season against Man City, and they decide to appoint Anthony Taylor who lives in Manchester as the referee, and Paul Tierney who lives in Greater Manchester for VAR.

How incompetent must you be @FA_PGMOL?

Manchester born Anthony Taylor is the referee for the Man City vs Liverpool game.

I know managers can’t decide who takes charge of matches, but after all that has gone on (Everton v Man City penalty last month as well), appointing Paul Tierney as VAR for Man City v Liverpool on Sunday seems bizarre ? #LFC #MCFC pic.twitter.com/8854KgKPU5

PGMOL assigning Paul Tierney to VAR in the biggest game of the season after all the controversies with his involvement in LFC matches, and Klopp saying he is the only referee he has issues with, is an absolute joke. When incompetence has no consequence it only gains confidence.

when you remember Paul Tierney was in charge of all these poor decisions pic.twitter.com/CAnB3z0IV1

“Honestly, I have no problem with any referees, only you. You don't give us this penalty – you have never played football” Klopp to Tierney pic.twitter.com/PFOBKOoIFk

Anthony Taylor and Paul Tierney? Are you fucking kidding me?

Task was hard enough as it was. Now it's close to impossible with these imbeciles officiating.

Guaranteed a big decision will be missed for us or handed to City.

I cannot believe Anthony Taylor's appointment for Sunday's game. The authorities are incompetent at times, but this is impressive even by their standards.

Could be anyone other than him, given his roots.

Man City are already +2 points based on Paul Tierney’s mistake not to award Everton a clear last-minute penalty.

Now he gets to have another go… in the title decider.

The Premier League has announced that Anthony Taylor will referee Man City v Liverpool, with Paul Tierney on VAR duty.

The PL also confirmed that the Gallagher brothers will be the linesmen for the game, with Chesney from Coronation Street as fourth official.

In reality, there could have been controversy in any appointment for such a high-profile game, such is the partisan nature of supporting a football club – and, it must be said, the shocking standard of refereeing throughout the Premier League.

But it is certainly questionable whether Taylor and in particular Tierney should be involved in such a tie, not only due to their ties to Greater Manchester, but also performances this season.

Tierney was involved in the staggering call not to award Everton a penalty for Rodri’s handball in their 1-0 loss to City in February – though VAR Chris Kavanagh was largely at fault that day.