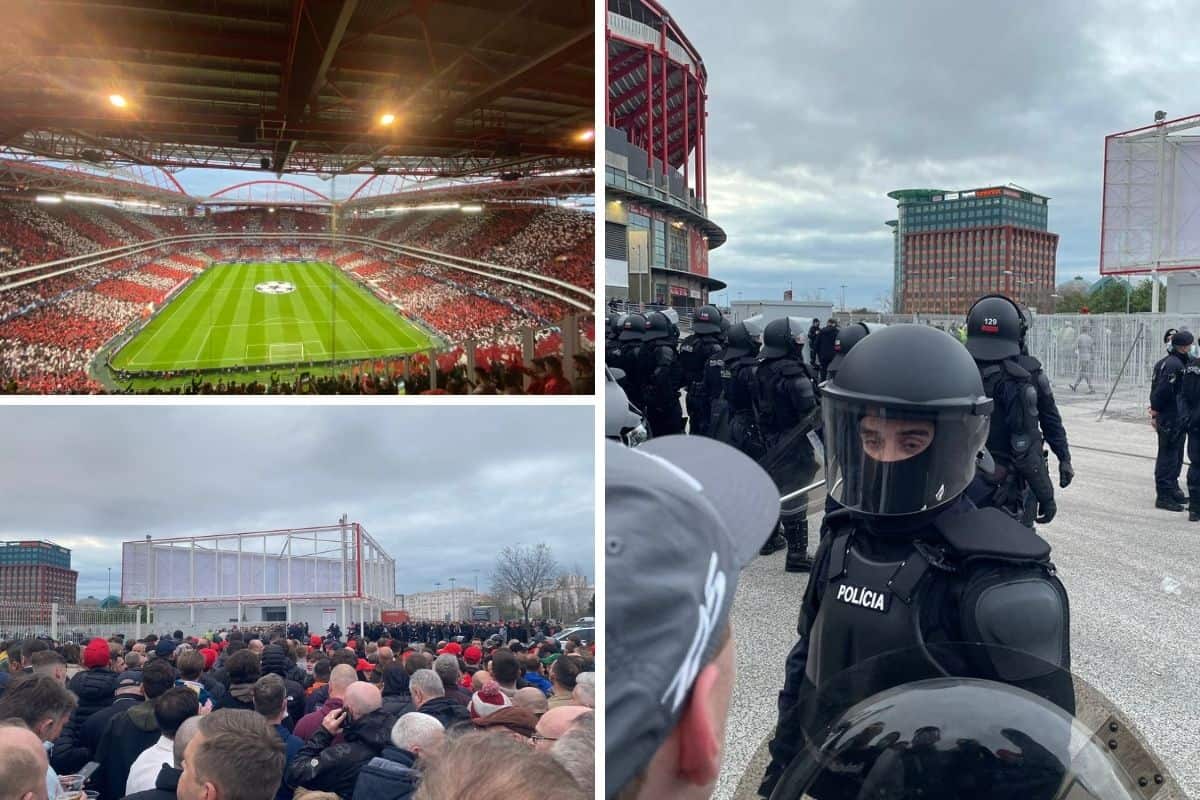 Liverpool fans in Libson have documented the dangerous policing tactics at the Reds’ match against Benfica that led to many missing the kick-off at the Estadio da Luz.

After being aggressively searched by stewards outside, fans were then held back in small pens almost like cages before being able to enter the stadium.

The police held fans back from entering the stadium in sections before closing the walkway to crossing Benfica fans. Each time this was done, it created a dangerous build-up of Liverpool fans, especially near kick-off.

Indeed, many missed the start of the match and the away end was only around 60 per cent full at kick-off.

When fans did enter, this then created a build-up in the lower areas.

This kind of policing is sadly commonplace for supporters attending European fixtures, particularly in Spain, Italy and Portugal, yet little to nothing has been done by the authorities to change it.

The whole experience has been widely documented on social media, with some questioning whether such treatment makes it worthwhile:

Kept inside the ground for close to an hour, held back further by baton-carrying cops once we got outside and then made to get on a metro that only stopped at one, pre-designated station. As Les says, it’s time after time we’re treated like this and, each time, it’s a disgrace. https://t.co/N8nl2wP7OX

Why in Spain , Italy & Portugal do their police and authorities think it’s still ok to treat people attending a sporting event like dirt . We were met with dangerous levels of hostility. My son & I were pushed by police shields and threatened with batons. @ChrisSaintyUK

I’m sort of done with European aways . Well , I’ll go again, to amazing cities, I can’t not, but not to the games themselves . What’s the point ?

Police preventing Liverpool fans from entering the stadium at Benfica tonight, meaning a lot of fans have missed kick off #LFC pic.twitter.com/sk3AMb3ACY

The way we’ve been treated is Lisbon tonight is dangerous and a disgrace.

The club have to raise this with UEFA

Poor policing, had to introduce my 12 year old to being kettled pic.twitter.com/y2kwnxziAm

Lisbon police up there with the very worst, including the Italian police, in how to treat away fans. Nothing short of a disgrace that tonight. @LFC @UEFAcom

Time and time again we are treated like pricks away from home in Europe, the police tonight were a fucking disgrace, Benfica will come next week and walk freely about the city and have no issues getting in and out the ground

Got caged in and treated like scum for no reason. Missed the kick off and has riot police throwing batons in mine and my sons faces for absolutely no reason whatsoever. Genuinely thought we were going to get filled in at one point for simply wanting to get in the ground pic.twitter.com/LtPI1AiHRB

Surely time for a unified response from English clubs, especially those whose fans regularly travel to Europe – insistence that they’ll no longer put up with their supporters being treated like this and, even, an insistence that they manage all aspects of away-crowd control. https://t.co/PeIJ9iOFxG

I love Portugal and the Portuguese people,but the way Lisbon authority and Police treated us today and tonight was disgraceful, absolutely no need and Lfc ? and UEFA need to look at this. ?@LFC @spiritofshankly @ChampionsLeague

Lisbon police up there with the very worst, including the Italian police, in how to treat away fans. Nothing short of a disgrace that tonight. @LFC @UEFAcom

The way liverpool fans were treated by the @SLBenfica last night was awful come to Anfeild and see how @LFC treat our visitors , the Lisbon police were wanting a response From the LFC fans so they could use there riot gear on us but we’ve been doing this a very long time ,

Afterwards, there was the usual European lock-in, with fans kept in the stands for almost an hour, before being marched by riot police to the Metro then put onto trains heading in one direction and stopping at one station.

Some fans who had hotels near the stadium still had to take those trains away from the stadium, then find taxis back to where they started.