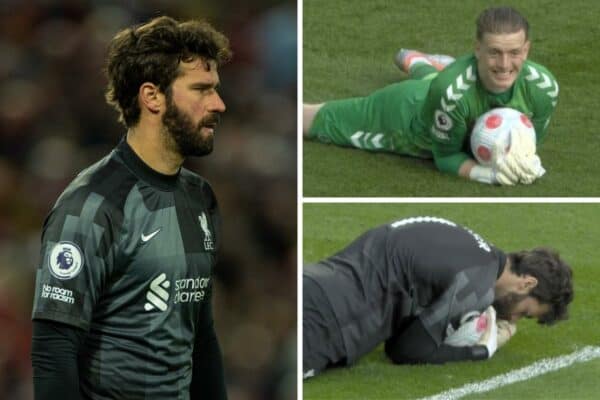 Liverpool were frustrated throughout the opening hour of the Merseyside derby as Jordan Pickford continually wasted time, which Alisson called back to late on.

Everton arrived at Anfield with a clear game plan: play as little football as possible.

One of the tactics employed saw Pickford time-waste as often as he could; including lying on the ball after routine collections in the penalty box.

But with his arms not quite long enough to keep out Divock Origi‘s header as Everton went down 2-0 in the second half, it was another miserable derby for the England goalkeeper.

Alisson, who was inactive for much of the game, made sure to hammer that home late on when he recalled Pickford’s antics in a move that delighted the Kop.

His wife, Natalia Becker, was among those to revel in one of the moments of the season:

This was shared by supporters on social media, with many calling for Alisson to be awarded Man of the Match for that exaggerated dive alone:

That is iconic from Alisson ?

Moment of the season from Alisson there. Tremendous.

If there’s ever a statue of Alisson built at Anfield, this is the pose https://t.co/a6MUxNgohV

That bit where Alisson Becker fell on the ball at the end of the game might be the happiest I've ever been.

ALISSON BECKER. I FUCKING ADORE YOU.

Alisson to Pickford after dropping to the floor to time-waste in the last minute : pic.twitter.com/G8CTleQhbz

Love that from Alisson

Give Alisson MOTM for that alone. Sensational.

Alisson MOTM for that alone

Liverpool were deserved winners in the derby, but it was a much hairier game than they enjoyed at home to Man United five days previous.

But as Origi nodded in the second, adding to Andy Robertson‘s headed opener, it gave the Reds the breathing space to enjoy the closing stages, which Alisson certainly did.

Everton came to Anfield hoping for a circus, and Alisson made sure Pickford went away a clown.