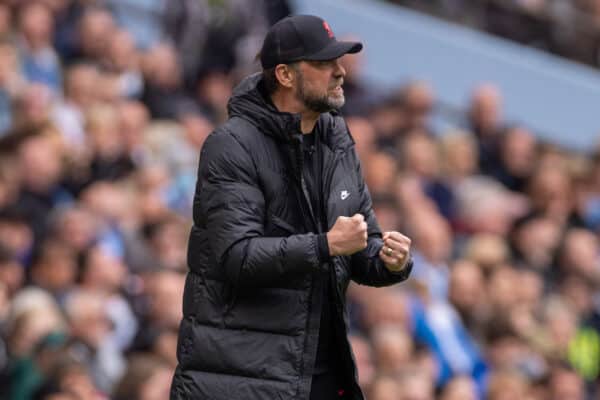 Liverpool were poor but drew 2-2 away to Man City on Sunday afternoon, in what was a pulsating Premier League clash.

The Reds faced one of their biggest games of the season, with the victor at the Etihad potentially proving vital come May.

Jurgen Klopp‘s men were awful in the first half, falling behind to Kevin De Bruyne’s strike, but equalised through Diogo Jota.

Gabriel Jesus put City 2-1 up shortly before half-time, but Sadio Mane levelled straight after the restart to keep them a point behind Pep Guardiola’s side.

Here’s how supporters reacted to Liverpool’s draw on Twitter, Facebook and in This is Anfield’s comments section.

Some assessed what was a relentless game of football…

Take the positives – the game is over ?

Any sane Liverpool fan takes that result EVERY day of the week. How we haven't lost that I will simply never know.

Yes, it's still in City's hands and their run-in is easier, but that should've been title race over there.

One point. Seven games. Incredible game of football between the two best teams in the world.

“Not the ideal result, but not the worst either. Much better 2nd half, but heart attack every time we were defending.”

I hope we come to see that as the biggest point in our history. We were post European away flat. A fantastic result in hindsight.

That was horrible. A battle for the ages as the pinnacle of English football did its thing. Regardless, the title race was always going on. Some big heart shown from Liverpool. What a match.

Others were perfectly happy with a point…

What a breathless match between two outstanding teams. I’ll take a draw there all day long, even if we still need favours from elsewhere (and to uphold our end of the bargain, of course)

Fortunate to draw but we will take it. City still favourites. #LFC

Take the draw & run after that first-half. Play like we did in the second-half for the full 90 at Wembley & we beat them.

“I’m okay with the draw…better second half. I feel Fab and the defence were not on par today…”

Weirdly similar to the first game. City dominant first half, Liverpool drag it back 2nd half.
Home team pegged back twice, Liverpool lucky to end with 11. A frustrating draw, but not a fatal one.
Advantage City, but not over.

Liverpool can play a lot better so avoiding defeat was a decent result in the end. Leaves the fate of the title in City’s hands but a lot can happen in 1 game let alone 7. On we go… #LFC #PremierLeague #MCILIV

Decent result all things considered. Two very brave teams. Shame Liverpool didn’t show up in the first half as I think there was something there for us #MCILIV

There was concern for Fabinho…

Fabinho has had a bad game by his standards. Been better 2nd half than first but had an easy pass out wide to Robertson that would've led to a late cross while we had players in the box but instead gave it away and led Mahrez almost winning it.

Fabinho having an absolute shocker

By far the worse game by Fabinho in a Liverpool shirt. Absolutely dreadful.

Fabinho was pretty terrible wasn’t he. Big shame that

Fabinho passing was terrible in that game.

But the title race is still alive…

Home and away against Crystal Palace, Liverpool, Southampton and Tottenham.

Showed great character in that second half. Still, advantage City.

Huge performance in the second half from Liverpool. Number 20 still well within reach #LFC

LFC much better second half. Game really could've gone either way, so the draw is a fair result tbh. City have the easier run in, but I can still see them dropping points. This title race is far from over!!#MCILIV