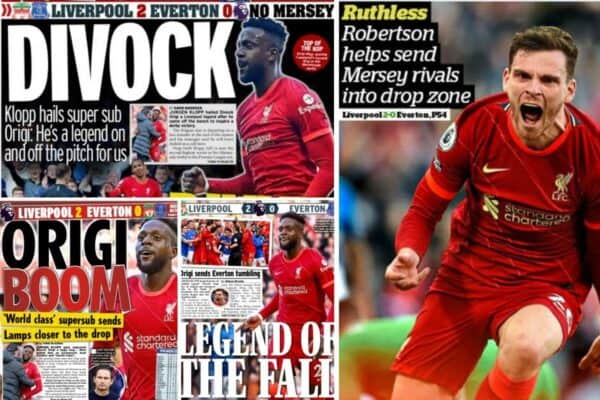 The watching media hailed Liverpool’s dogged 2-0 win at home to Everton on Sunday, as Divock Origi added another goal to his iconic collection.

Jurgen Klopp‘s men were a long way from their best at Anfield, but that didn’t matter in the slightest come the final whistle.

Andy Robertson eased the nerves just after the hour mark, before substitute Origi settled matters with a header in front of the Kop.

The win means Liverpool are once again one point behind Man City, as this most relentless of seasons continues.

A gritty win was understandably focused on…

Phil McNulty of BBC Sport felt it was a case of ‘job done’ more than anything:

“This was not the flowing, blistering Liverpool that effectively won the FA Cup semi-final in the first 45 minutes against Manchester City at Wembley and who dismantled a hapless Manchester United at Anfield.

“Everton‘s rearguard action and determination to disrupt Liverpool infuriated and frustrated Anfield in the first 45 minutes but eventually the dam broke and for all the visitors’ courage they were not able to hold out.

“Manager Klopp may well take as much pleasure from how Liverpool were forced to dig deep and overcome Everton‘s determined challenge as he would from the way they have swept so many teams aside this season.”

“Often we can easily pick out whether the changes worked or players impressed, but the context of the game meant individualism was a nightmare and even cohesion fell away in the first half.

“The greater point is that Klopp didn’t wait around before opting to switch matters up, with a change in shape and more of an attacking focal point through Origi.

“Those changes quickly paid dividends after the hour mark.”

Martin Samuel of the Mail also had to touched upon Liverpool’s changes:

“An hour gone, Jurgen Klopp had seen enough. He didn’t need a packed midfield to win the game against an Everton team intent on spoiling.

There was lots of love for Origi…

The Independent‘s Richard Jolly heaped praised on the brilliant Belgian:

“Everton may have feared the worst when they saw the No.27 appear on the electronic board. They had denied Liverpool a shot on target, let alone a goal. Enter Divock Origi, the derby talisman, and perhaps their fate was sealed.

“Within two minutes, Origi had contributed when Andy Robertson broke the deadlock. He duly added his sixth derby goal to seal Liverpool’s 12th win in 13 league games and if it was a header from half a yard, it was nonetheless typical that the scourge of Everton scored.

“Liverpool are now a point behind Manchester City, Everton some 50 behind their neighbours. They are second from top and third from bottom and this could be the last derby for quite some time. ‘Going down.’ chorused the Kop, with increasing relish and regularity.”

“Divock Origi, what can we say. He hasn’t played with any great frequency this season, certainly not in 2022, but if there’s a game you can count on him to play a vital part in then it’s the Merseyside derby.

“Within minutes he was involved in scoring our first, combining with Salah before the cross, before he also nodded in the second in opportunistic fashion late on.

“Origi might not play another minute for the Reds, given the number of forwards and the fact he’s out of contract and almost certainly leaving.

“If that’s the case, he’s put another layer of paint on the legacy he was already leaving: one of momentous occasions, goals and trophy-defining fixtures.

“Let’s hope this was another one of the latter. Onto the Champions League!”

Tom Victor of the Mirror lauded the forward:

“Back in the 2018-19 season, Liverpool needed a late, late intervention from Divock Origi to break Everton‘s resistance. This time, with the visitors similarly stubborn at the back, Jurgen Klopp turned to the Belgian once more.

“Origi didn’t break the deadlock this time, but he played a big part in the move when teammate Robertson headed home. It was his link-up play which created space for Mohamed Salah, and the Egypt forward’s cross was turned beyond Jordan Pickford by Robertson.

“He wasn’t done there, though. Six minutes from time, as Diaz’s acrobatic effort flashed across the face of goal, Origi reacted quickest to head home a victory-clinching goal.

“The 27-year-old is expected to leave Liverpool at the end of the season when his contract expires. While he’s rarely been a first team regular, Klopp’s willingness to call on him in big moments gives a good idea of how many fans will remember his time at Anfield.”

And Goal‘s Neil Jones couldn’t believe it was Origi yet again:

“It just had to be him, didn’t it? When you need a hero on derby day, what do you do? You send up the Bat Signal and you ask for the Big Belgian.

“Yet again, though, we came away from a Merseyside derby talking about one man.

It could be such a special month ahead…

“It puts the Reds right back in City’s rearview mirror after Pep Guardiola’s side thrashed Watford 5-1, and still on course for their ambition of adding the Premier League, Champions League and FA Cup to the EFL Cup.

“Liverpool now face Villarreal in the Champions League semi-final first leg at Anfield on Wednesday as firm favourites and their challenge continues to gather huge momentum.”

Chris Bascombe of the Telegraph believes the result could be big for two reasons next month:

“For Liverpool it was a result that not only kept the dream of an unprecedented ‘quadruple’ alive but, for some, there was also the added spite of a possible ‘fiver’ by helping to demote Everton from the top-flight for the first time since 1951.

“Before kick-off Everton fans turned their backs at the singing of “You’ll Never Walk Alone” and they were goaded with a chant of ‘going down’ from the gleeful Liverpool supporters especially after Origi’s goal.”

Finally, Jones looked ahead to a potentially iconic final 10 games:

“They plough on, their title dreams still alive and their quadruple hopes maintained. This was not pretty, and certainly not enjoyable for the most part, but it is another game ticked off.

“Ten to go, and everything could still be theirs.

“It promises to be a nervy run-in. There were certainly signs of tension here, with Everton doing well to prey on that, niggling and chipping away, wasting time and challenging the home fans, and players, to keep their patience and concentration.

“Liverpool did, just, their fitness and their quality off the bench just too much.”