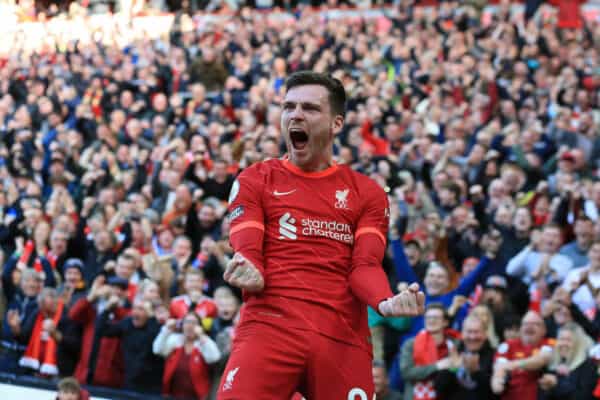 Liverpool took a while to get going and needed some real patience, but Divock Origi helped the Reds down Everton yet again – maybe this time for good.

Only two changes – a surprisingly low tally in the eyes of some, with the Reds having a Champions League semi-final in midweek and Jurgen Klopp having a habit of making mad switches for the derby.

Diogo Jota came into the attack for Luis Diaz, Naby Keita replaced the skipper in the middle.

Often we can easily pick out whether the changes worked or players impressed, but the context of the game meant individualism was a nightmare and even cohesion fell away in the first half.

The greater point is that Klopp didn’t wait around before opting to switch matters up, with a change in shape and more of an attacking focal point through Origi.

Those changes quickly paid dividends after the hour mark.

It took about two minutes to realise the tactics Everton would be employing, and five minutes for the pattern to be set.

They were going to foul, frustrate, dive, time-waste and generally shithouse their way to a point if they could.

A dive from Gordon, 20 seconds for every Pickford goal kick, Coleman making a verbal battle with anyone every time the ball went dead for a free-kick, Richarlison having a head injury from heading the ball – this was Lampard taking a page straight out of the Jose Mourinho manual, and no wonder really.

Everton wanting a stoppage for Richarlison’s ‘injury’ after running vaguely close to Thiago was a farce, as was the ref’s utter failure to stop all the time-wasting in the first half.

A reminder that being mentality monsters works both ways

The strength of mind that Liverpool have shown in big games across the last few years is regularly brought forward as a reminder of proof that this is a special team.

Fine, and true, but not to only pick and choose when it applies.

That’s probably the message Jurgen Klopp had for his side at half-time: mentality isn’t just about comebacks, it’s about the mindset all game long.

Everton had a deliberately antagonistic approach, fine. That’s up to them to repeatedly prove how shit they are.

But Liverpool’s job in that situation is to not fall for it, not be lowered to those same standards, not be jogged from their own objectives and not get so frustrated that our greater quality is removed from the equation.

That’s the other side of football mentality: an acceptance that smaller clubs will be worse and try to irritate for 90 minutes, not match you pass for pass.

An important lesson for the remainder of the season when similar matches may lie ahead.

It’s a pretty frequent occurrence that Trent Alexander-Arnold and Andy Robertson hit the headlines, though it was for different reasons on this occasion.

Indeed, ‘occasion’ probably describes it well as that’s what seemed to get the better of Trent from very early on.

Wayward passes and a few arguments were how he started the game, as well as losing out in the footrace with Anthony Gordon more than once.

A yellow card for a necessary, but desperate, slide tackle on the same player was pretty much an inevitability.

Trent was sloppy with his clearances too often and his set-pieces weren’t great either – while he was not often in his favoured areas to cross either.

Robbo, on the other hand, was very strong defensively including a couple of important clearances from cut-backs – plus he netted the all-important opener.

Loan him back for the derby

Divock Origi, what can we say.

He hasn’t played with any great frequency this season, certainly not in 2022, but if there’s a game you can count on him to play a vital part in then it’s the Merseyside derby.

Within minutes he was involved in scoring our first, combining with Salah before the cross, before he also nodded in the second in opportunistic fashion late on.

Origi might not play another minute for the Reds, given the number of forwards and the fact he’s out of contract and almost certainly leaving.

If that’s the case, he’s put another layer of paint on the legacy he was already leaving: one of momentous occasions, goals and trophy-defining fixtures.

Let’s hope this was another one of the latter.

Onto the Champions League!