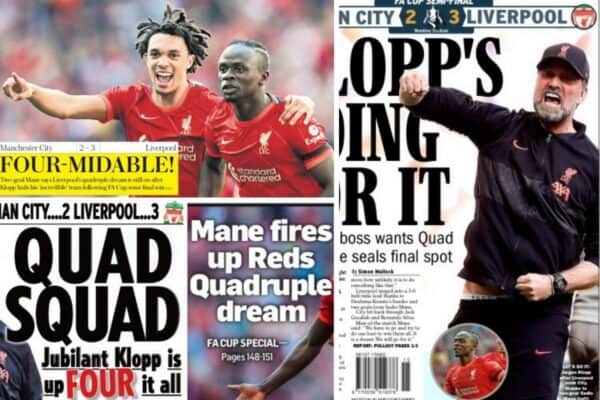 Liverpool beat rivals Man City 3-2 to reach the FA Cup final on Saturday, with the on watching media assessing another memorable game between the pair.

The Reds faced City at a stifling Wembley looking to keep their quadruple chances alive, in what was always going to be a nervy affair.

Ibrahima Konate‘s header put Jurgen Klopp‘s team 1-0 up early, and when Sadio Mane scored twice before half-time, Liverpool had one foot in the final.

City responded both early and late in the second half, making for a tense finale, but the Reds held strong and secured a place back at Wembley next month for their first FA Cup final in 10 years.

Here’s a look at how the media reacted to Liverpool’s triumph.

Liverpool’s performance was lauded by some…

Goal‘s Neil Jones believes the Reds have landed a psychological blow on City:

“You could not have gotten a cigarette paper between the sides at the Etihad Stadium last week, or at Anfield in October for that matter, but the third instalment went Liverpool’s way, thanks to a first-half blitz from Klopp’s side.

“How significant a result this will prove to be in the context of the rest of the season, only time will tell, but it feels like a big blow landed from the Red corner.

“City may have restored some pride in the second half, but all of a sudden it is their squad which looks the weaker of the two, heading into the final weeks of the campaign.”

The Daily Mail‘s Oliver Holt was never in doubt about Liverpool’s win:

“It was over when Jurgen Klopp was able to rest several of his first choice players for the tie against Benfica last week.

“It was over when the Liverpool team was announced and it was a first-choice eleven. It was one of those occasions when everyone could sense what was coming.

“Even Peter Reid, the great Evertonian, knew it when he was interviewed before the game. To his regret, he said, he foresaw a win ‘for the Reds’.

“And so, if the league clash between the two best teams in England last weekend was a thriller, a nail-biter full of suspense, we knew how this film ended before we sat down to watch it.

“Sure, the closing stages were frantic and glorious and compelling but the scoreline did not reflect a first half, in particular, that was brutally one-sided.”

And This Is Anfield‘s Mark Delgado was in awe of the Reds’ first-half display:

“Defensively sound, lightning in transitions, some exceptional combination play and clinical in the final third.

“Against Manchester City, at Wembley.

“It’s quite possible this was the most complete, close-to-perfection performance across a half of football that even this formidable side has put together, given the context of the opposition and match meaning.

“That kind of dominance and perfection against a side this good could never have lasted all match of course, but we had done more than enough.”

Jones paid particular attention to Mane after a decisive brace:

“It was Mane, though, who proved decisive, and it was no surprise when, shortly before Bernardo had made it 3-2 in the first minute of stoppage time, it was the Senegal star who was named by the stadium announcer as the Player of the Match.

“Starting in the middle of Liverpool’s front three, the 30-year-old, who scored the all-important leveller in last weekend’s Premier League draw, was a threat from the word go.

“Backed up ably by Diaz and Salah, and a midfield which functioned far better and with far more purpose than it did six days ago, Mane pressed City early and pressed them hard.

“And for once, Guardiola’s side could not cope.”

Mark Jones of the Mirror lauded the ever-increasing impact of Konate:

“Remarkably, after failing to score at all in his brief Liverpool career prior to 11 days ago, that’s three in three for Konate.

“The French defender is still learning the ropes and how to play for this Liverpool team, but his aerial presence is considerable and he’s become a really potent weapon from set-pieces.

“As he rose to meet Robertson’s corner he got up above Nathan Ake, a decent Premier League defender who will perhaps not be cut out for City in the long-run.

“In Konate, Liverpool may just have found their future.”

TIA‘s Joanna Durkan loved what she saw from Luis Diaz:

“He really has a first touch that was gifted by the football gods, even as the English sun added a distraction – but he was not to be unnerved.

“The trickery came out of the bag one way and the desire to track back was on show in the other direction, with Diaz a key part of the relentlessness that was Liverpool at Wembley.”

What this Liverpool team are achieving is truly special..

The Independent‘s Miguel Delaney looked ahead to a potentially legendary next month or so:

“Klopp has already achieved so much, as he guided the club to their first FA Cup final in a decade.

“They already did similar with Europe’s secondary trophy under the late Gerard Houllier in 2001, but this is a level beyond. This team may be a level beyond – at least in everything bar the league.

Jones also weighed in on Liverpool’s search for “immortality”:

“And so the quad quest goes on until May at least.

“Liverpool are taking a shot at football immortality here and they are making a very fine attempt at it.

“For a long time the old ‘one game at a time’ mantra has served Jurgen Klopp‘s side well, but this is surely now the real test of it.”

Finally, Sam Wallace of the Telegraph touched upon the tantalising prospect of four trophies this season:

“They earned their FA Cup final place, and the possibility of a domestic Cup double, with a thrilling first half dominated by the goalscorer Sadio Mane and the maestro, Thiago Alcantara.

“The absentees in Guardiola’s side were felt severely, and never more so in midfield when Fernandinho exacted retribution for the rare lack of control he and his team-mates felt.

“Luis Diaz was exceptional before the break and it was so good for Liverpool they barely had to deploy Mohamed Salah on the opposite wing.

“Very much alive in the Premier League title race, in the FA Cup final and the Champions League semi-finals, Liverpool still have the possibility of much more beside the League Cup that is already on the shelf.”