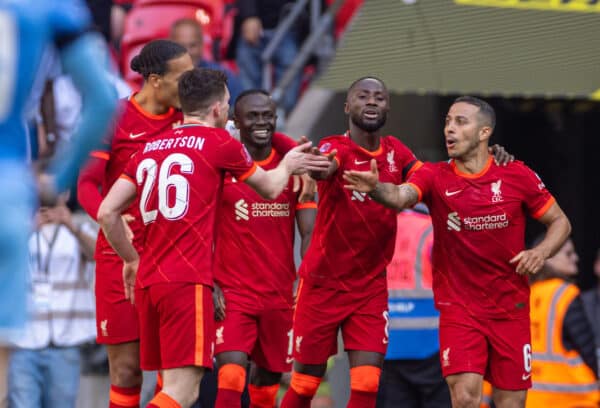 Liverpool made it needlessly nervy at the death but their first-class performance in the opening half was enough to send the Reds to their first FA Cup final since 2012 with a 3-2 win.

Not his cleanest game in possession but when called on to make a save, he was exactly where Liverpool needed him to be to ensure City could not get any wind in their sails.

Quick off his line and clean hands made for few scares, especially as they pressed late.

Who said he can’t defend?

A pickpocketer and snuffing out City’s forward forays, the right-back combined his defensive work with his movement in-field and desire to quickly fire the ball upfield.

A beautifully pinged ball to Diaz set up Liverpool’s third and it was deserving of the finish that followed, a ball of pure artistry.

Continues to grow leaps and bounds with every game, with his front-footed approach and assertiveness in the challenge a hallmark of his game.

But it is his threat from the set-piece that has come to the fore recently, with the opener his third goal in three appearances – equal eighth-most in the squad this season.

The captain for the first 72 minutes, the Dutchman played with little theatrics but was guilty a time or two of keeping City onside as Liverpool squeezed up.

Equal to that, his corralling of Jesus was typical Van Dijk as he made up the yards and guided the City forward away from Alisson and the goal before then making crucial blocks and clearances at the death.

He was one of a handful of players to head into the game fresh but it didn’t always look that way, despite offering plenty of overlapping options to Diaz.

And if nitpicking further, found himself too high without imposing himself on the ball too often and thus leaving his defence open in his absence, with City’s second seeing him pushed out of the way far too easily.

A key piece of the midfield jigsaw, the Brazilian, while at fault for not properly corralling Gabriel Jesus for their goal, was industrious as always.

Throwing himself onto the ball and setting the Reds in motion, Fabinho found space where perhaps at first look there wasn’t any as his intelligence and awareness came to the fore.

You still cannot help but marvel at how the Spaniard looks as though he can slow time down when on the ball, it’s something you can never grow tired of watching.

His ability to control the ball, assess the situation and pick out the pass is second to none and it triggered Mane’s second of the day, his third assist of the season.

Brilliant in the tackle when Liverpool needed him to be.

This is the Keita we want to see, high and early into the press and recycling possession through midfield and into the forwards without hardly breaking a sweat.

Joining the right-sided triangle with Alexander-Arnold and Salah, the No. 8 was in control and hardly offered City an inch — worked his socks off and was substituted with 20 remaining.

A constant outlet on the right, Salah was tireless in his work even if was not quite clicking as it did for his counterparts.

One only needs to be slightly off the pace and Salah is just that at this current point in time, but he’s dragged us with him plenty and it will all fall into place for him again.

He really has a first touch that was gifted by the football gods, even as the English sun added a distraction – but he was not to be unnerved.

The trickery came out of the bag one way and the desire to track back was on show in the other direction, with Diaz a key part of the relentlessness that was Liverpool at Wembley.

A driving force in the central role up top, it was Mane’s day to shine as he ran the City defence ragged and had goalkeeper Zack Steffen constantly on edge.

His desire to press and force the goal in off the boot of Steffen had Klopp gleefully smiling on the touchline but he only went and topped that with a stunning volley on the outside of his boot.

It was inch-perfect into the bottom corner the finish was as brilliant as the build-up, the goal of the season?

Jordan Henderson (on for Keita, 72′) – 6 – Didn’t quite make a mark on the contest, hit and miss with his passing.

Roberto Firmino (on for Mane, 84′) – 6 – Missed a glorious chance late on when the goal was begging.

Diogo Jota (on for Diaz, 84′) – N/A – Not much time to have an influence as the Reds instead focused on defending.

The day started with an exciting selection for his XI, adding plenty of dynamism and intent with Keita and Diaz and it more than paid off as Liverpool were all over City like a rash.

It was a relentless and unforgiving first half and the Reds did the needed damage on the scoreboard, and Klopp looked gleeful indeed on the touchline.

Needlessly nervy at the death and the manager’s substitutions did not help in that regard but a statement win nevertheless as Liverpool remain in the quadruple hunt.

They have now reached both domestic finals and have a shot at the Champions League final is only around the corner. This is some team we’re witnessing.

Relish it Reds, these are special days.