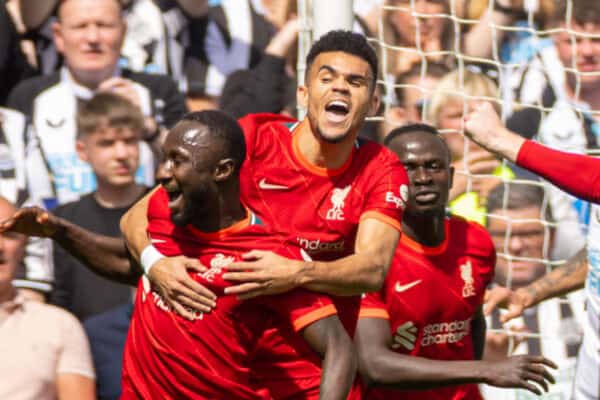 Naby Keita‘s well taken first-half goal proved the matchwinner as Liverpool continued their incredible quest for a quadruple by moving back to the top of the league, at least temporarily.

There was an unfamiliar look to Liverpool’s right side, with no Mo Salah or Trent Alexander-Arnold in the starting lineup; Jurgen Klopp making five changes to the side due to this match being sandwiched between Champions League semi-final ties with Villarreal.

James Milner was a surprise inclusion in midfield, while Gomez deputised at right-back.

Liverpool took the lead just inside 20 minutes when Naby Keita showed superb composure to round the ‘keeper and fire the ball home after a nice one-two with Jota inside the box.

The goal came immediately after Milner had been involved a 50-50 tackle with Schar, which VAR reviewed but it was clear Milner got to the ball first and if anything it was a foul by Schar.

It could have been 2-0 15 minutes later when the Reds broke through Diaz, but Mane’s shot lacked power or precision.

There were also half chances for Jota and Van Dijk, with Klopp’s side bossing proceedings against the in-form Magpies who had won their last six home games prior to this.

Mane had another excellent chance to make it 2-0 just after the hour, placing his shot wide after a lovely move that ended with Gomez squaring for the Reds’ No.10 inside the box.

Before that, a nice ball over the top by Milner almost got Jota in and then Robertson skewed an attempted lob over the ‘keeper.

There was another superb chance to double the lead when Jota was in on goal but he opted to power the ball straight at the ‘keeper when he had options to square it or place either side.

Another big opportunity arrived for the Portuguese with 10 to go but this time it was more of his own creation, his eventual shot after a dribble palmed away.

The fear was that these missed chances would come back to bite Liverpool and it made for a very nervy final 10 minutes.

Thankfully, the Reds saw it out

The win puts Liverpool, temporarily at least, top of the league, with Man City to play Leeds United on Saturday evening.

Next up for the Reds is a trip to Spain to face Villarreal in the Champions League semi-final second-leg on Tuesday night. Then it’s Tottenham at Anfield next Saturday night.