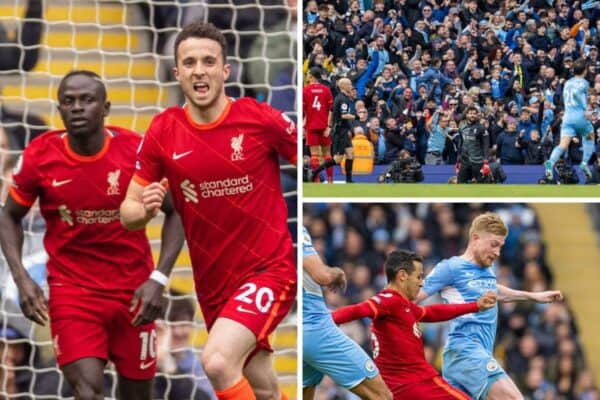 One point separated the two teams before the 90 minutes and the same can now be said after, but optimism remains for what could be for Liverpool this season.

A battle of the Premier League‘s heavyweights did not disappoint, perhaps more for the neutral, but Liverpool’s ability to twice claw back Man City‘s lead spoke volumes.

Diogo Jota and Sadio Mane ensured there remains just one point in it after Kevin De Bruyne and Gabriel Jesus struck for City, with all eyes now on what unfolds in the next seven league games.

Here, This Is Anfield’s Joanna Durkan (@JoannaDurkan_) is joined by David Comerford (@Dave_Comerford) and Ben Kelly (@bkelly776) to discuss the draw and their current feelings on the title race.

DAIVD: Liverpool’s first goal was excellent. The switch of play from Thiago, the only player who looked composed in the early stages, was amazing, and then the side-to-side combination between the full-backs was reminiscent of the move that led to Firmino’s goal in the 2018/19 fixture.

And then for the second, Mo Salah’s pass is top-drawer, both in terms of vision and execution. I think he deserves credit after the criticism he received in the build-up to the game. He still wasn’t at his best, but even though he only had one shot, he found a way to impact the game with a moment of real quality.

Hard not to agree about Thiago, I thought he was the only one to settle into the game from the off and his experience was telling – could’ve done without his flirtatious nature towards a second yellow, mind.

If you asked me before the game if I would take a draw, I would have begrudgingly but it was a fair representation and if anything, we were lucky not to concede more in the first half.

A strong reaction straight from the break was needed and we then navigated the game with more control and awareness. We’re still in it.

DAVID: Joel Matip also deserves a mention for me. He was absolutely colossal in the second half, coming up with a number of crucial interventions, and without him we might well have been talking about a title race-ending loss here.

Credit also to Jurgen Klopp, who came under fire on Twitter at halftime for his selection but clearly used his half-time team talk to good effect. Liverpool’s best spell in the whole game was arguably the 10 minutes after the break.

BEN: It’s really difficult to pick out ‘standout’ things from this one. I thought the game was really…odd, particularly the first half.

Everything about it, the way we played, the atmosphere in the ground, it was a strange game to watch when you’re emotionally invested in it.

The second half, we were obviously much better. Some players seemed totally transformed in the second half. Thiago got on the ball a lot more and started to do his thing, the pressing seemed to be better. The Mane goal was great, but again, it was so weird to score that quickly after halftime after being battered in the opening 45!

It was a mad game, nothing about it made sense. That’s why we love it, I suppose.

DAIVD: I won’t pick out individual players here. I’ll focus on the broader issues instead.

First, Liverpool were visibly nervous. A degree of anxiety is inevitable given the magnitude of the fixture, which I’m sure has been in the players’ minds for weeks, but we know how much big-game experience this group has, and you expect to see more steel.

It gave me flashbacks to the second leg of the 2018 Champions League quarter-final, and the 2018/19 game. In all three cases, City smelled blood from the off.

The sloppiness was also incredibly frustrating. Liverpool took far too long to clear the ball and, worse still, they gave it away in their own final third on a number of occasions. The corner from which they scored the second goal stemmed from one of those mistakes. The punishment was inevitable.

The last thing I’d say is that we’ve taken four points from a possible 12 against Man City and Chelsea – the two truly elite teams in our league. Our failure to win, or deliver especially convincing performances, in these games doesn’t bode well for the cup semi-final and the latter part of the UCL (if we get there).

JOANNA: Too right there, David, there were definitely nerves at play, and Trent admitted as much in part due to the media’s build-up to the game.

The team seemed to be playing the occasion and not what was in front of them at the start but credit does have to go to City, they put pressure on that particular weakness and had their wits about them.

Fabinho was, unfortunately, one to have a stinker in the first half and frazzled minds made for erratic decision-making, both of City’s goals coming as a result.

But notably, it was the lack of pressure on City’s key ball movers that made everything look twice as open and twice as hard – you can’t be doing that against a team of that calibre.

It’s why I expect Roberto Firmino and Luis Diaz to play in the FA Cup semi-final on Saturday.

BEN: A lot of neutrals did a lot of talking about how high quality the game was, and I think second half it was more true, but I felt like I had been watching a different game to everyone else at half time.

We were shocking. We were so sloppy, it felt like we had frozen. The high line has served us well but we weren’t doing the pressing to make it effective, as Joanna said.

When you give Rodri, Laporte and Kevin De Bruyne(!) time on the ball and you stick with the high line, it’s suicide against them. The pressing has to be better at Wembley on Saturday if we’re going to stick with it.

How does the result feel in the bigger picture with 7 to go?

DAIVD: We have to stay optimistic. The parallels to 2018/19 are undeniable, but City’s schedule is trickier than many seem to realise.

For instance, Brighton have picked up points at Anfield, Stamford Bridge and the Emirates and West Ham have beaten Liverpool, Chelsea and Spurs at home. City, let’s not forget, have also dropped points against mid-table sides on four occasions already this season (eight times overall).

The fear is that they find an extra gear, and maybe that those sides don’t have the motivation they had earlier in the campaign, but the depth of quality in this Premier League is as good as it’s ever been.

Of course, we can’t take for granted that Liverpool win all their remaining games. Some of them look tricky, most of all Spurs at Anfield. In all likelihood, we too will have string together seven straight victories, which before this Pep/Klopp era would be regarded as a very tall order. If we can come through unscathed, I still believe we can win this title.

JOANNA: I’m with David, definitely still have to be optimistic, where would the fun be if we weren’t?

Having control of our own destiny would have been the ideal situation, but in some ways, it feels more natural for Liverpool to be the chasers and I truly believe we can win all seven that remain.

In saying that, I’m not sure I can go through another final day like 2018/19 when it is all on the line and you’re waiting for a goal against City and one for Liverpool – torture of a different kind.

Anfield will play a key role with four of the seven left on home soil – the same goes for City but they’ve dropped more points at the Etihad this season than they have on the road.

It’s genuinely now a race of perfection but we’re still in the hunt for all four, not much more we could ask for at this stage.

BEN: I’m not entirely sure how we got out with a point, but now the dust has settled, they’ll be far more upset with the point than we are given how the game went.

None of their three remaining away games are nice. You look at Leeds, Wolves and West Ham, they’re tough places to go, they’re teams who are either playing well right now or are generally having a good season.

We’ve just got to keep winning our games. The squad know they can do that. The important thing is we can still talk about winning all four for now, and I like that