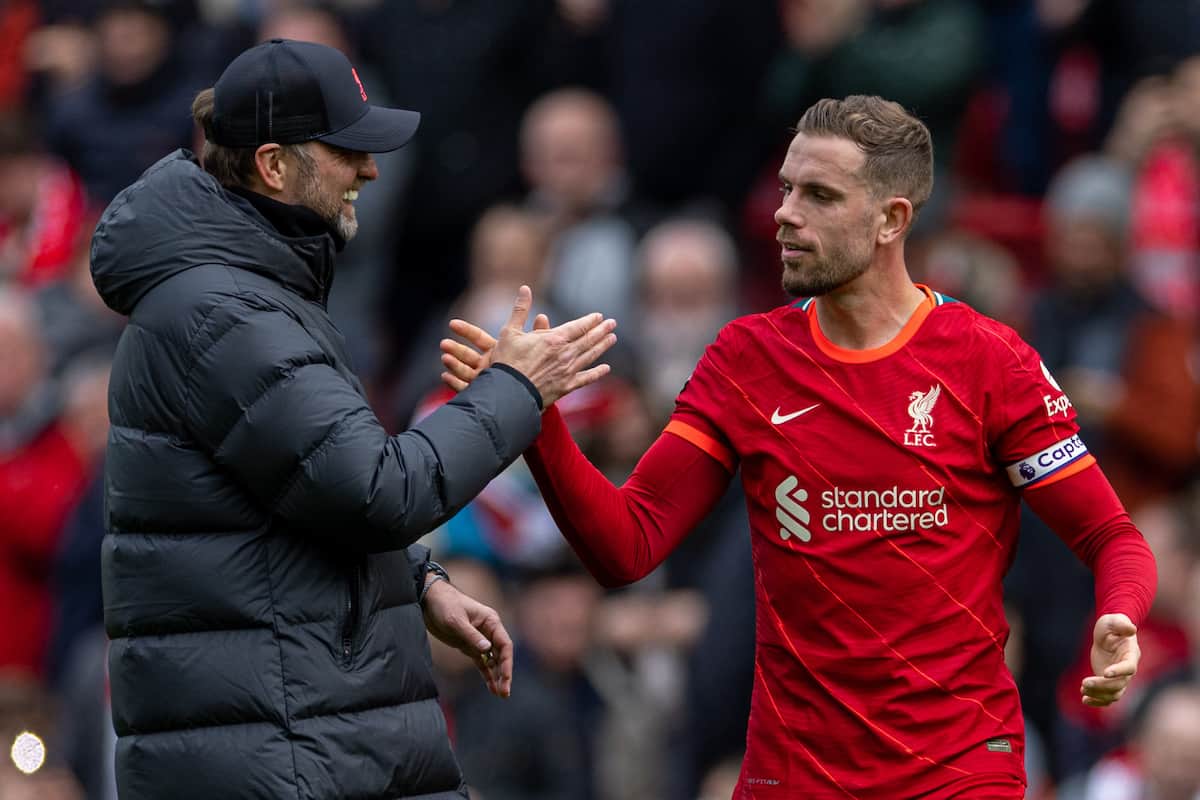 It was not pretty but it did not need to be for Liverpool, with a 2-0 win enough to move Jurgen Klopp‘s side to the top of the table, for the time being at least.

The run-in took flight with the visit of Watford, a side battling for their safety in the Premier League as Liverpool looked to move to the summit.

The juxtaposition could not be more clear but there could be no underestimating the visitors with the margin for error little to none.

And after a bout of early impetus from the Hornets, a quick progression up the field ended with Diogo Jota deftly steering the ball into the net thanks to a sumptuous Joe Gomez delivery.

With no desire to see tension creep into Anfield, the second goal was desperately sought after but the Reds were still blowing off the dust that accumulated during the international break.

It didn’t make for pretty viewing throughout, but a late penalty after Jota was dragged down in the box offered a chance to create a buffer that Fabinho did not waste!

The 2-0 win moves Liverpool to the top of the table, at least for now, and fans were delighted:

I still marvel a little at Thiago's propensity for violence I really did not expect that side of his game when we signed him.

Could science clone Thiago by any chance? I’d like that.

Just look at Thiago, what he is doing today is totally insane. How many players in the league are passing the ball that well?

If I could go back to being a youngster and decide which footballer I’d like to player football like it would 100% be Thiago.

Thiago Alcantara by the way, absolutely immense there.

Thiago man of the match. Gomez also good. Firmino the best of the forwards.

Burst out laughing at at least five Thiago passes first half. He’s ridiculous.

Thiago’s passing in on another planet, makes every pass look beautiful.

Thiago's performance today has been half Mascherano and half Xavi.

It wasn’t easy on the eye, but the Reds are top!

You're never going to be at your best for a 12.30pm kick-off after an international break with top spot riding on it but this #LFC team are just so good at grinding it out when they need to. Oh and surely Watford have enough games/quality to drag other teams into the scrap.

A huge three points, and also a deeply stressful watch!

Felt myself feeling increasingly sick in those last 30 mins – genuinely feared the worst. Not a good performance but they all count.

It's going to be a slog Reds just got to win the next, and the next and the next by any means necessary. Strap yourself in and enjoy the ride

A long way from our best, as if often the case after an international break. A big 3 points to start a pivotal month though. Thiago and Bobby the stand-outs. A word also for Joe Gomez who has been excellent at RB in successive games. Easy to forget he fared well there in 2017/18.

For an early Saturday kick-off straight after the international break, the sloppy performance was to be expected but all that mattered was the three points.

Thiago was the shining light and the Reds will need him throughout the rest of this decisive month, while Roberto Firmino and Joe Gomez both provided reminders of what they can offer.

The result is significant and it’s game on. Benfica next, then City. Up the Reds.