Jurgen Klopp has made five changes to his starting XI, as he looks to guide Liverpool to their third Champions League final in five seasons tonight.

Since signing off the first leg against Villarreal with a 2-0 win, Klopp signed a new contract to keep him at the club until 2026 and three more points were secured in the Premier League.

It ensures the good times keep on rolling for Liverpool, and the hope is that continues tonight with a trip to Paris booked for May 28.

It’s a huge occasion in a rain-sodden Villarreal, but that will not dampen the spirits of either set of supporters as the two sides go head to head.

For Liverpool, Alisson is looking for another shutout, his 27th of the season, and has Trent Alexander-Arnold, Ibrahima Konate, Virgil van Dijk and Andy Robertson sitting ahead of him.

The midfield is made up of Fabinho, Naby Keita and Thiago.

And Mohamed Salah, Sadio Mane and Diogo Jota all lead the line and complete the XI.

As usual in the Champions League, Klopp has named a strong 12-man bench from which he can make five substitutions throughout the 90 minutes. 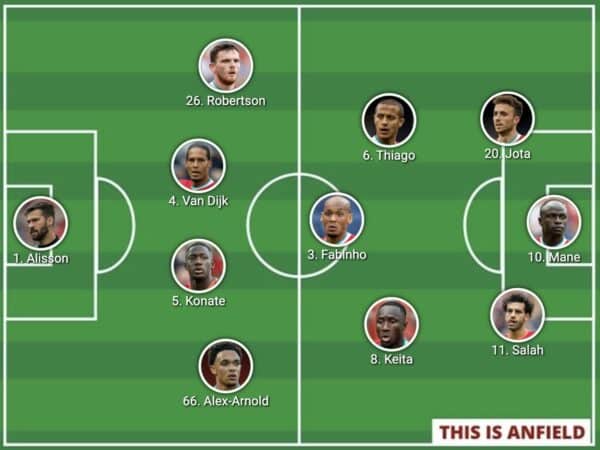