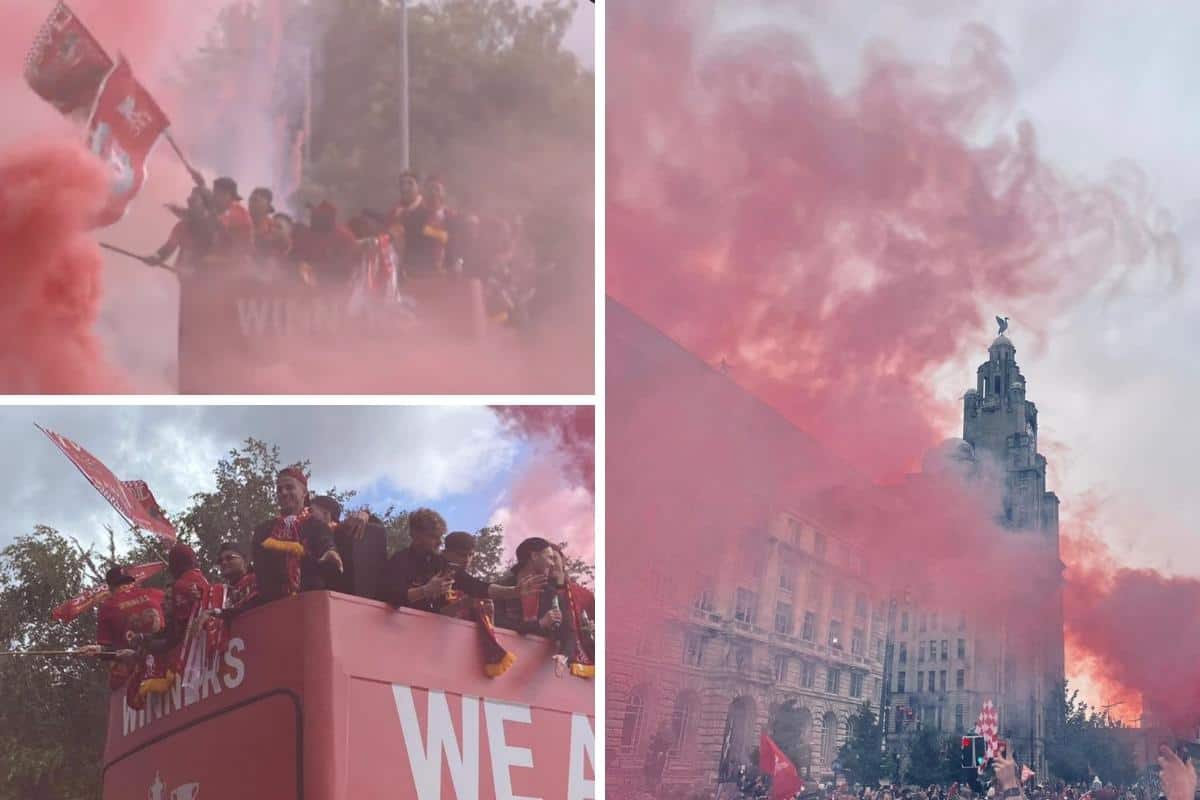 If you thought spirits would be dampened after Saturday night, Liverpool’s homecoming proved otherwise as Jurgen Klopp‘s men were greeted with a sea of red at every turn of the parade.

Andy Robertson admitted he and the Liverpool squad were worried “how many people will show up,” but they needn’t worry.

Liverpool’s homecoming from Paris saw the city bathed in a sea of red from the start of the parade route until the very end as Klopp’s squad were shown plenty of love.

The two domestic trophies were on show, as was the women’s Championship title as fans congregated and gained the best vantage point they could to create some truly amazing scenes.

This is Liverpool Football Club in all its glory:

That was everything my soul has needed for two years. I LOVE THIS CITY AND THIS FOOTBALL CLUB! pic.twitter.com/ehYi7LraQ0

Parade vibes on the way into town! ??? #LFC #Liverpool pic.twitter.com/PuyQxROnwK

I'm so glad that Jurgen is a red. ? #LFC #YNWA #Liverpool pic.twitter.com/P0DRE30G3C

A sea of red everywhere on the parade pic.twitter.com/jgl4g970by

Huge crowds as the parade turns on to Mill Bank #LFC pic.twitter.com/9KQWeGYlYI

? Forget what anyone else says, appreciate what this squad have given this season. This parade us for us, and for them. ?? pic.twitter.com/RkSlBLMsdq

Jordan with the missing piece of the puzzle during his Liverpool career. pic.twitter.com/uN3l6vjEa7

What an incredible reception from the Liverpool fans ? ? pic.twitter.com/CqCkjDZKHM

When players have just played every game possible and lost only 4 games out of 63 all season , this is what they want to hear and see. Support and love , this is what will inspire them and new players to want to play for this Jersey . This is YNWA ? #LFC pic.twitter.com/zlu1JMMYCI

Anyone who thinks this season has been a disappointment for Liverpool, try telling that to these two ? pic.twitter.com/Mg0n3fgMR3

Couldn’t even see the bus this year ? pic.twitter.com/DWxBlWCHQj

Moments to cherish. Thank you for your incredible support ?? pic.twitter.com/eEzTfty9rF

There is nothing quite like it. Imagine being us.

Up the mighty Reds!