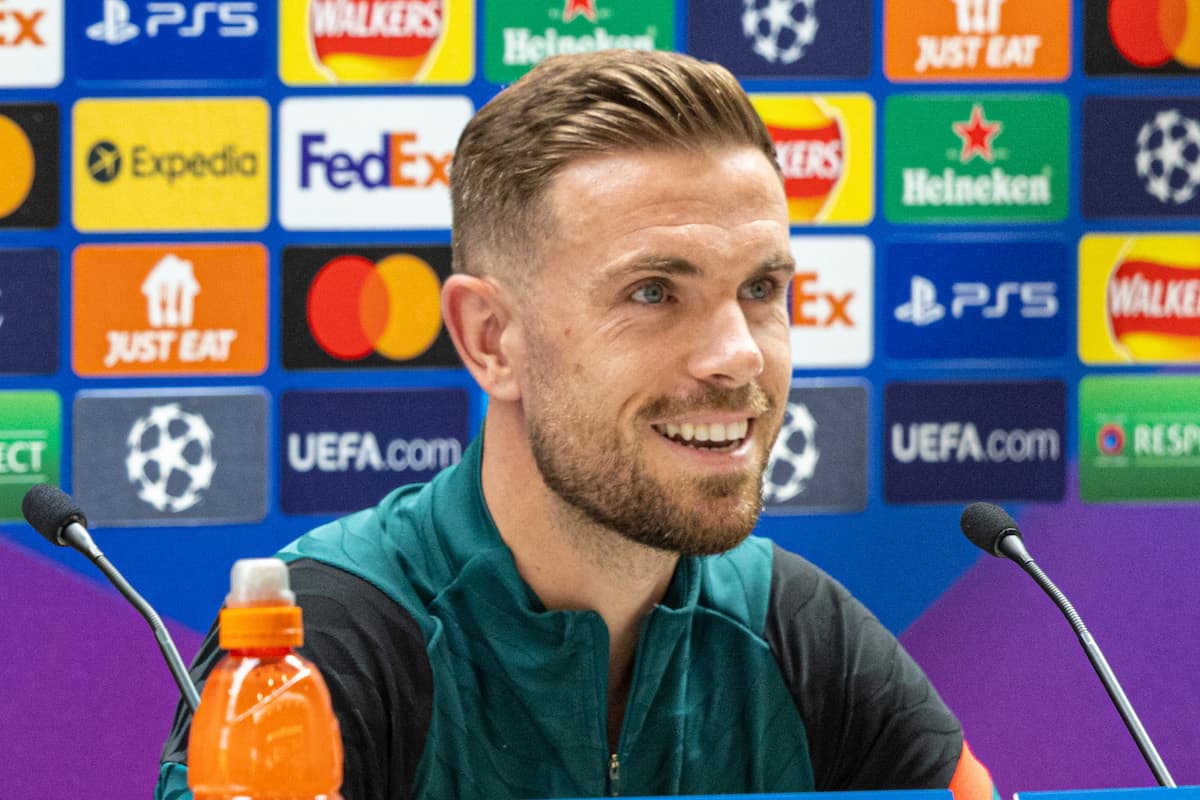 Jordan Henderson has featured 56 times for Liverpool this season and 61 combined for club and country, numbers that he feels answer questions of if he is “getting too old.”

After being plagued by injury last season and other issues coming to the fore in the years previous, it’s been a relatively uninterrupted campaign for the Liverpool captain.

Henderson’s minutes have been carefully managed within games having been substituted out of a match 20 times, typically from the hour mark onwards.

This careful management coupled with his own focus on recovery has made for a consistent season, albeit a relentless one that resulted in his absence from England’s latest squad.

But it was an agreement made between Henderson and Gareth Southgate due to his heavy workload, which will “hopefully” prove positive for Liverpool.

“I spoke to Gareth a few days ago and we spoke about the summer, what was best, yes for me, but also the team,” Henderson said of the England squad.

“And with the amount of games, with the Champions League final, with other players in the squad that are going to be playing, he felt as though the best thing for me was to have a rest, have a break and make sure I was ready to go again next season in the best possible condition.

“Hopefully that will be a positive for Liverpool, yes, but also England when the World Cup comes.”

The Liverpool captain has featured in more games for the club than any other player in Jurgen Klopp‘s squad this season, 56 from the 62 to date.

It’s a tally that is two more, expected to soon be three with the Champions League final, than his previous career-high with the Reds back in 2014/15.

At 31, Henderson has felt “really fresh for the majority of the season” and also credited Mohamed Salah for offering a number of tips to keep fit and available.

“Physically, I think again my numbers probably speak for themselves this season,” Henderson said to reporters on Wednesday. “I played a lot of games, I’ve felt really good.

“Mo’s given us a few tips on recovery which I’ve learned from. It’s helped us a lot.

“This season, for me personally, has been really positive.

“I’ve been really fresh for the majority of the season, it’s probably the most I’ve ever played, number of games-wise, I think including internationals maybe over 60.

“That’s pretty special for me, especially when you get into your 30s and people start questioning if you’re getting too old all the time. It’s nice to put out those numbers and perform as well.

“Just very grateful that I could stay fit this season.”