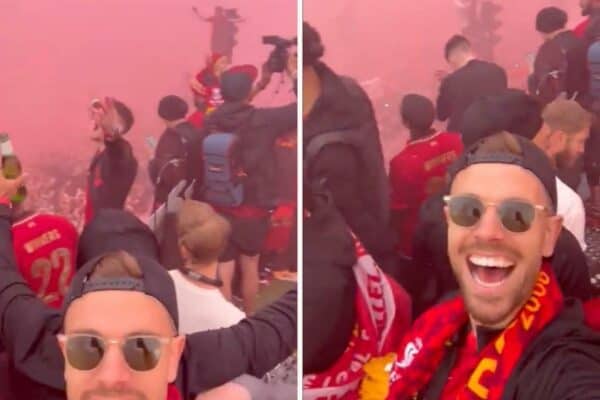 Jordan Henderson: ‘Sunday’s parade was one of the best days of my life

After a crushing low of losing the Champions League final the night before, Jordan Henderson has described Liverpool’s trophy parade as “one of the best days of his life.”

On Saturday night, Henderson led the Liverpool squad up to the podium to receive their silver medals after losing 1-0 to Real Madrid in Paris.

The following day, they returned to John Lennon Airport ahead of a trophy parade that many within the squad feared would not live up to expectations.

Henderson, along with Jurgen Klopp, first stopped off at the Heysel Memorial at Anfield to lay a wreath in memory of the 39 fans – many of whom were Juventus supporters – who lost their lives at the Heysel tragedy on the same day in 1985.

Then they made their way to Allerton Maze, where a 13.5km parade route began, with the entire Liverpool first team joining the women’s squad on red buses emblazoned with the word ‘Winners’.

An estimated 500,000 supporters lined the streets in celebration, awaiting a glimpse of the players and staff who paraded the FA Cup, League Cup and Women’s Championship trophies.

While it started as a bittersweet day, for Henderson it ended as “one of the best” he had ever experienced.

Didn't think it would of been possible after last night but today was one of the best days of my life. Thank you Reds. ?? pic.twitter.com/9ylCthHuQT

“Didn’t think it would have been possible after last night but today was one of the best days of my life,” the captain wrote on Twitter. “Thank you Reds.”

Speaking to LFCTV while on the bus, Henderson spoke about concerns among the players over how the parade would be received after losing in Paris, and their determination to “say thank you.”

“We weren’t quite sure what to expect when we came on the bus, obviously [we are] disappointed with last night and how the season ended, but overall the lads have given everything and this is what it means to the fans.

“The least we can do is say thank you to them for what they gave to us this season, supporting us across the country, across Europe.

“To say thank you means a lot to the lads.”

The captain added: “We missed this a few years ago when we won the league, so to spend it with them now is really special.”