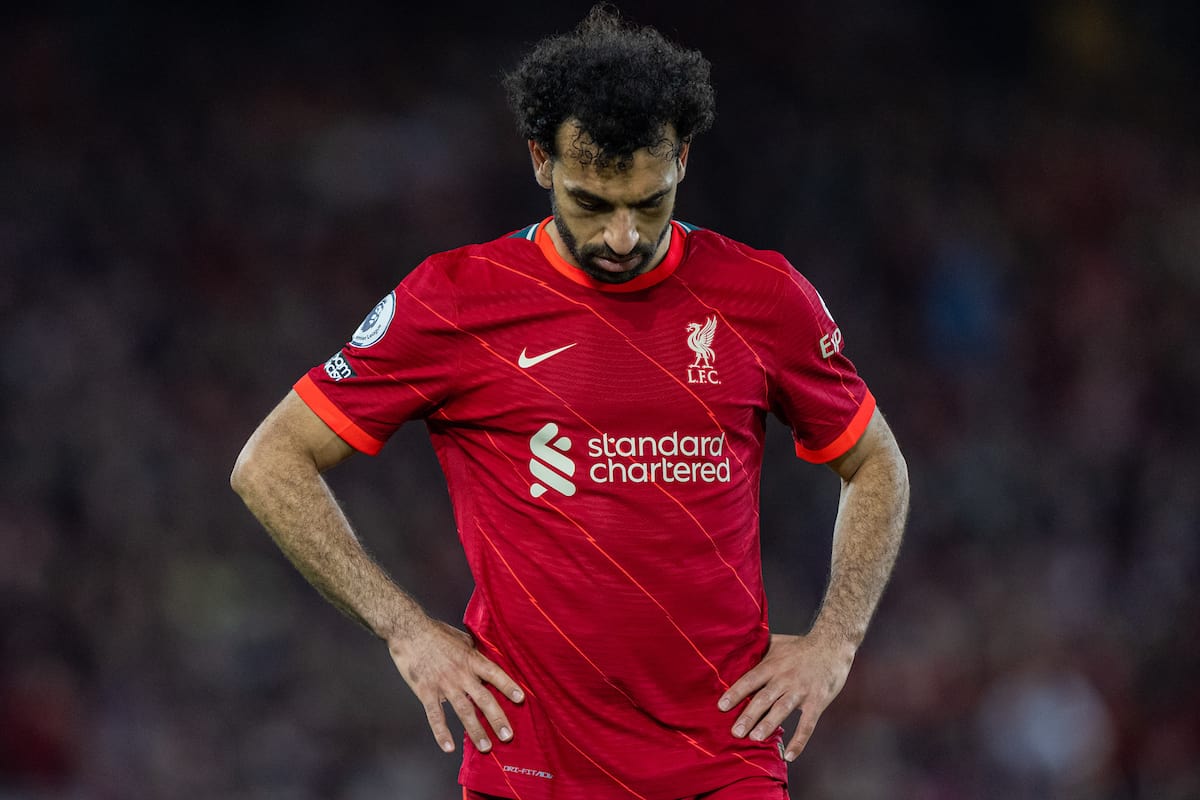 Liverpool are top of the table in the most bittersweet fashion as a 1-1 draw with Tottenham might not be quite enough to keep our title hopes alive.

First sight of our Ali was as he guided a Hojbjerg shot wide off the post after 42 minutes – nice to see he was indeed playing at that point as we were going to have to double-check at half-time otherwise.

No chance for the Son goal and had basically nothing else to do.

First 30 minutes of this fixture gets shown to everybody who says Trent can’t defend between now and the end of 2031/32.

Superb track on Kane to rob his attempted break, then thwarted the pace of Son too with another interception.

Sent over his usual couple of magic deliveries too in amongst that and rifled a strike over.

Should maybe have put more pressure on Kane in the buildup to Spurs’ goal when swapped flanks after a set-piece. 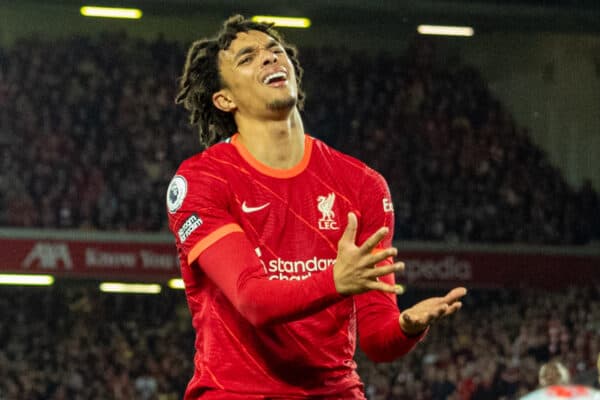 Did this start suggest Ibou has put himself into the first-choice XI with two cup finals looming? Matip has been starting in the league so this was a change of approach from Klopp.

Didn’t misplace a pass in the first half and made one really good tackle to stop a counter dead.

This first half might have been the most unruffled Virg has ever looked while having to do bits – everything he faced from aerials to runners, clearances to passing out, he looked totally relaxed and unruffled even if it was tough.

Very unlucky not to net with a thumping header against the bar. 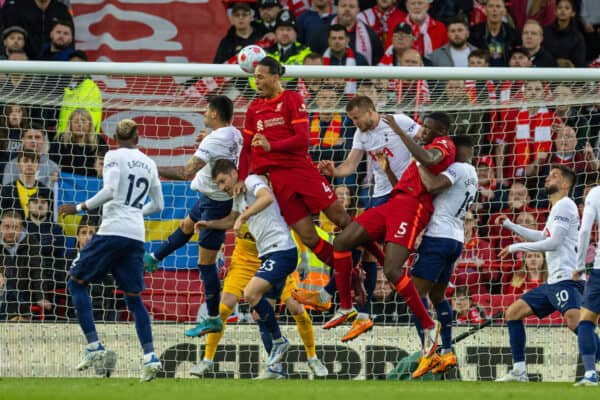 Couldn’t quite make the most of an early headed chance, but was a rampant overlapper right from kickoff.

Dealt well with the counter of Kulusevski but was about five yards too deep compared to the rest of the defensive line as Spurs cut through once and Son scored.

Probably the main tempo-setter for the Reds in that busy first half-hour, winning so many loose balls and challenges that Spurs were totally smothered.

Did a great job of making his usual necessary fouls look small and insignificant, escaping a yellow for a couple of clips in Kane in particular until an elbow through the throat of Son late on.

Might be a question over his placement and running back for the goal, but he was largely very good aside from that. 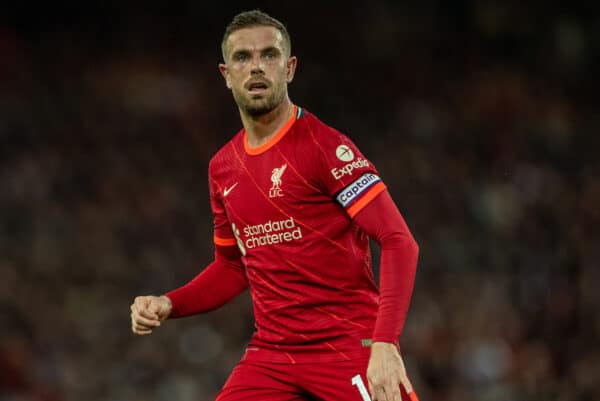 Two superb actions in his own box in the first spell, blocking a Kane shot and also setting away a counter-attack with a clever passed clearance.

Played much wider than recently in attacking phases, running outside of Salah and delivering a string of cutbacks or passes into dangerous areas.

His best game as a No. 8 in quite some time; subbed as the Reds needed a formation switch.

Sumptuous throughout, a player made of steel wrapped in silk.

Didn’t give Spurs’ midfield a moment on the ball, fired his passes around with a bit of magic and a lot of disguise, clipped a couple of superb deliveries over the defence which almost led to goals.

Technically got an assist, though not exactly one of vision and audacity!

His 250th game for the Reds – what a sensation he has been. Tormented Spurs with his runs off the ball but didn’t always get the delivery into the spaces he wanted early on.

Had two or three runs inside on his left foot which looked totally ‘classic Mo’, but a series of flying defenders thwarted him a fired finish into the corner.

Absolutely raced back with three minutes left on the clock to offer defensive cover on a dangerous counter.

Lots of hard running and a few glints of the jazz we’ve loved these past few months, but could maybe have done with lacing up his shooting boots a bit tighter in the first 45.

One great run and swap of passes with Mane ended in a shot saved, but more were blocked by ranks of white shirts.

Not so when we needed an equaliser; he opened the space and rattled one bottom corner via the studs of Bentancur.

Heavily involved in a lot of the first-half buildup but without ever really being in position to bury a chance himself after the first minute – where he swiped at, and missed, a volley.

Loads of pressing but didn’t always get the ball drop his way kindly or in a timely fashion, so a little off the boil in terms of effectiveness on the night.

Diogo Jota (on for Henderson, 63′) – 3 – Struggled, to be frank. Not too many sound touches or decisions. 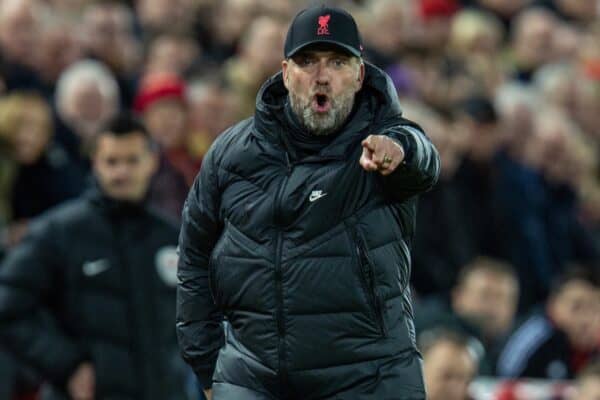 Went with what is now looking very much like his first-choice, or strongest 10, starters – with a regular toss-up between Jordan Henderson and Naby Keita for that final berth in midfield.

The skipper got the nod this time and the lineup left nobody in any doubt as to the importance of the game, or how difficult the Reds expected it to be.

As such, the validity of the lineup cannot be questioned – the Reds dominated play and made some openings, being by far the better team but without making the breakthrough.

His changes after the Spurs goal didn’t just change personnel but also formation, Jota and Mane central with a two-man midfield, as the Reds went effectively all-out-attack.

It got the Reds back on terms, but really, we needed more.