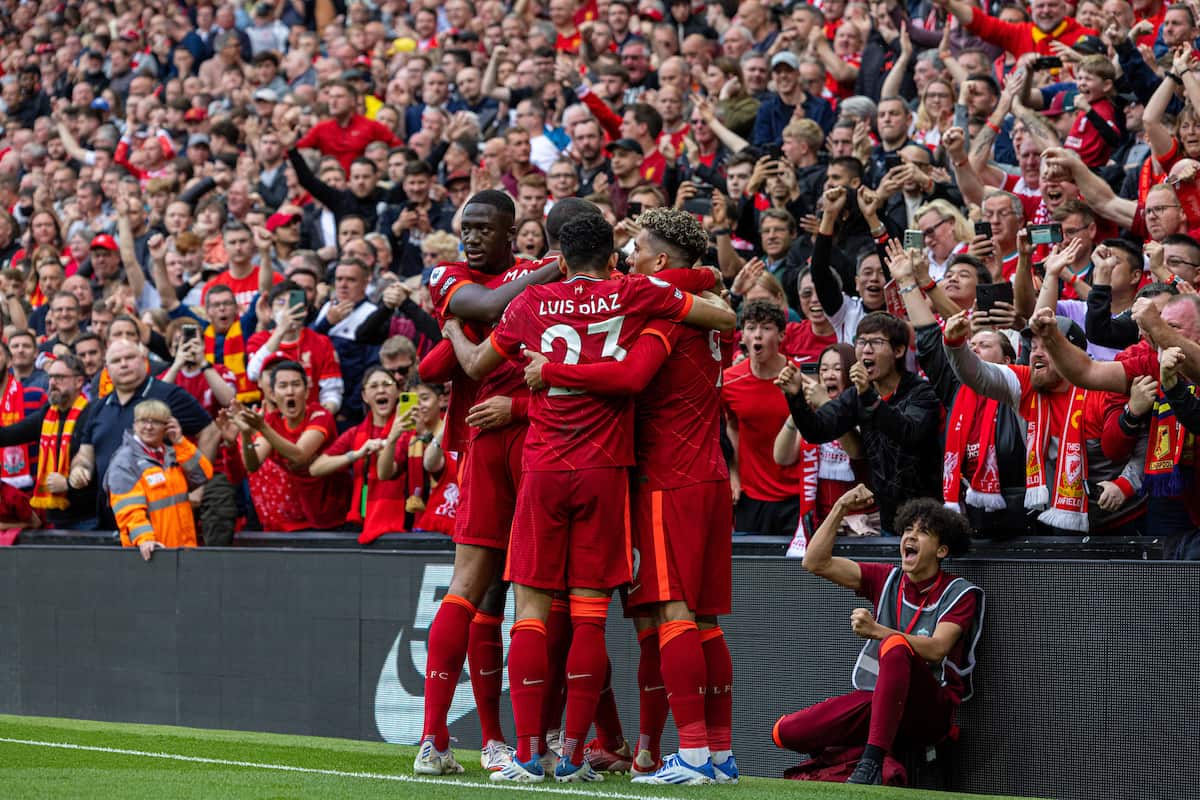 Liverpool fans were defiant after missing out on the Premier League title despite a 3-1 win over Wolves, showing their love for this incredible football team.

The Reds knew their job before the game, on what proved to be a pulsating final day of the season.

Pedro Neto stunned Anfield with an early goal for Wolves, but Sadio Mane equalised to level matters before half-time.

Mohamed Salah and Andy Robertson did put Jurgen Klopp‘s men in front to seal a final-day win, but it wasn’t meant to be for the much-dreamed-about quadruple.

Despite missing out, these Liverpool fans showed their love for their team on social media.

There was so much pride at the final whistle…

Another league lost by a point, gaining a points total that in many seasons would win you the title.

Phenomenal effort by @LFC. So proud of the team & the players. Especially after winning both of the other domestic trophies & in the CL final.

Just when you think it literally couldn’t get more dramatic, football finds a way. An absolute sickener, felt like it was in sight there and then snatched away, but what a season. A pleasure to watch this team.

Not going to lie, that stings. Couldn’t be more proud to be a red. What a team ??#LIVWOL

92 points. Played every single game we possibly could this season. Won two cups already and could win our 7th European Cup next weekend. What. A. Team. Unbelievably proud of every single one of those players and staff. Got to have something to aim for next season I suppose! ??

The destination was as expected, but the journey to get there makes it sting a lot more than i expected.

Heads High though reds, 90 points again, only 2 defeats all season, 2 cups in the bag and old big ears to go for next week. They have done us absolutely proud.

Up the fucking reds ?

I think we all need a lie down until Friday.

Two trophies, one more to come next week, and 2nd by ONE point. This team is truly phenomenal. Absolutely incredible. ??????

'We'll be running round Paris with the cup,' is the chant from a defiant Kop

Couldn't have done any more – a quite remarkable couple of teams and one was always going to have to lose.

Onto Paris now to complete a remarkable treble – congratulations to Man City.

One point again… but onto Paris next week

Season isn’t over. Roll on Madrid.

What a rollercoaster, what a day. It was within reach, so very close and not going to lie, that hurts.

We did our bit and in a race of perfection, Liverpool can be proud. Now for Paris!

“What a season!!! Well done boys, Villa almost did it for us. Roll on next Saturday to do it all again.”

It’s never a straightforward game. What a day, what a season, what a football club. Coutinho almost had his final Liverpool moment in the sun. Now, on to Paris. #LFC

Corrrr it’s the hope that kills ya…..roll on Paris, let’s do a bloody treble

14 points off City in January, took it down to the final game of the season. Proud of this incredible group of players. Onwards to the Champions League final.??

Mental drama that i wasnt expecting tbh. Villa being 2-0 had me sure the title was ours but it was never in our hands, its hard to take but again proud of the lads, let's go get number 7 next week.

Liverpool believed for a good while this afternoon, and Villa gave them plenty of reason to. The tension was unbearable.

In the end, Klopp's side have worked wonders to take it this far. It's been a hell of a ride, and there's still another stop off to come. #LFC #MCFC