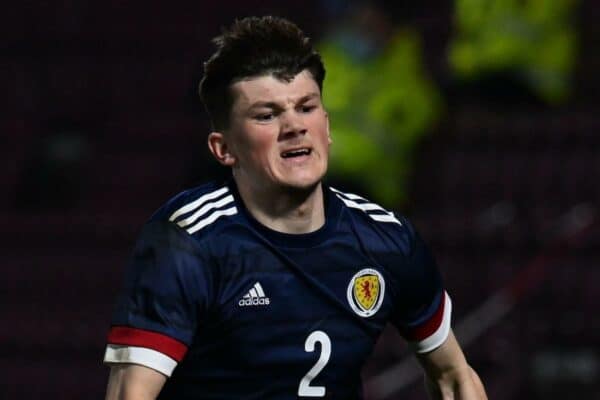 Liverpool’s record-breaking pursuit of Darwin Nunez has coincided with their push for Aberdeen right-back Calvin Ramsay, but the Scottish side has increased their demands.

While Nunez is only hours away from being confirmed as Liverpool’s latest signing, work continues on ensuring Ramsay follows him closely through the doors at Kirkby.

The 18-year-old has been on the transfer radar for some time now, with the right-back showing what he is capable of in a season that saw him named Scottish Football Writers’ Young Player of the Year.

It came after a 33-game season with one goal and nine assists across all competitions, leading to plenty of interest in his signature – but Liverpool is his preferred destination.

The deal was said to be “close to completion” last week with a medical expected in swift fashion, with the Reds having made their £4 million approach, with further add-ons that would take the deal to £6m.

But now, the Daily Mail has reported that Aberdeen now want a total package worth £8.5m from Liverpool, inclusive of add-ons.

It’s a fee that would shatter the Scottish club’s club-record sale of £3m, which came as a result of Scott McKenna’s move to Nottingham Forest in 2020.

Aberdeen are said to want “an upfront payment of £5m,” raising their demands beyond the £4m deal that was expected to be agreed upon.

And Sky Sports have also reported of a raise in demands, but they say that Aberdeen want a deal worth £10 million, with £5m up-front and a further £5 million in add-ons.

It’s not a surprise to see the Scottish side look to squeeze as much out of Liverpool as they can knowing they have agreed to a £64m, rising to £85m, deal with Benfica for Nunez.

For a club of their size, it represents a significant injection of cash for a player they have developed since Ramsay’s, very, early years in the game.

Liverpool may play hardball in return, though, for a player that would act as Trent Alexander-Arnold‘s deputy – but who is to blink first?