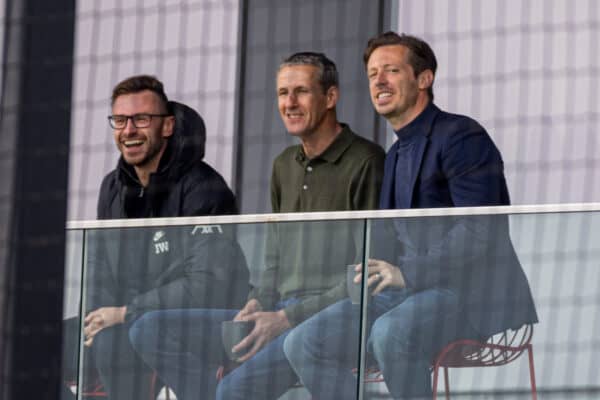 With Michael Edwards departing his post as Liverpool’s sporting director this summer, both Chelsea and Man United have emerged with interest in hiring him.

Edwards has officially handed over duties to Julian Ward after 11 years at Anfield, with the well-respected transfer figurehead holding the sporting director job since 2016.

It has already been an impressive start for Ward, who previously served as Edwards’ deputy, as the Reds have swiftly wrapped up deals for Darwin Nunez, Fabio Carvalho and Calvin Ramsay this summer.

That should allay concerns over the impact a changing of the guard would have on Liverpool’s recruitment setup, with the succession plan paying off.

Where Edwards lands next remains to be seen, but it has now been widely reported that Chelsea are hoping to convince him to join the new hierarchy at Stamford Bridge.

The Times‘ Gary Jacob and Matt Lawton describe Edwards as being “among the options being considered” following the departure of Marina Granovskaia, who was a “key ally” to Roman Abramovich.

Todd Boehly, who recently purchased Chelsea, is temporarily leading the transfer operation, but it is clear that an established name is required as sporting director.

Speculation over a move to west London is also picked up by the Mail‘s Sami Mokbel, though he claims that Edwards is “hesitant about making such a swift return to football” after an approach from the Blues.

A primary focus in the Mail‘s report is interest from Man United, who are overhauling their backroom this summer, though ESPN‘s Mark Ogden doubles down on Chelsea links and claims “a move to Old Trafford is unlikely.”

Ogden adds that “sources have said that a move to Chelsea would hold great appeal,” though it appears it will be a tough decision for Edwards who had planned to take time off.

Ajax, Monaco, Real Madrid, Newcastle and Paris Saint-Germain are among the other clubs to have been touted with moves for Edwards, though some of those have since denied interest or appointed other candidates.

It is no surprise, of course, that Edwards is so in demand, as the 43-year-old proved himself one of the most accomplished sporting directors in football during his time at Liverpool.