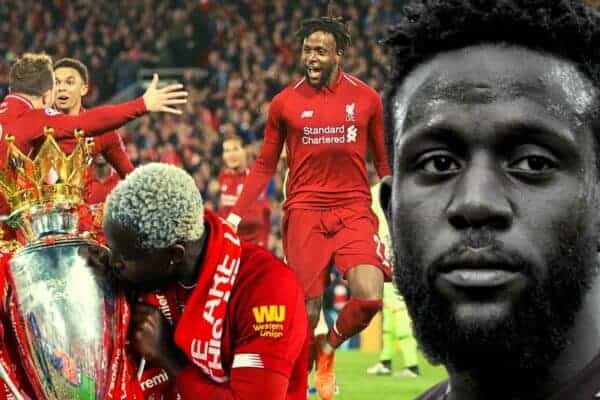 Divock Origi has left Liverpool after seven years, with the Belgian carving a legacy at Anfield defined by a seemingly countless run of iconic goals. A bona fide legend.

Cult hero: A writer, musician, artist or other public figure who is greatly admired by a relatively small audience or is influential despite limited commercial success

It’s a loaded, well-meaning phrase that can simultaneously be taken as a backhanded compliment.

Players that immediately spring to mind include Igor Biscan, Titi Camara and Djimi Traore, popular among supporters but ultimately not quite in the bracket on a football level as some of the best to have worn a red shirt.

Divock Origi has come a long way since being named in L’Equipe’s ‘Worst XI’ during his loan spell with Lille.

The Belgian joined the Reds back in 2014, and it’s difficult to imagine another footballer, let alone Liverpool player, with quite the same quotient of enormous goals in defining situations.

He has a reasonable 41 Liverpool goals from 175 games to his name in all competitions, but a collection of big occasion moments to rival any great of European football.

Here are five of the best.

It was quite possibly the greatest way you can conceivably win a derby, certainly the funniest.

A bright purple flare was tossed into the December sky from the away end just as Virgil van Dijk scuffed a volley that looked destined for block 206.

It was the celebration of a hard-earned point at the home of Everton‘s most rivals rivals, but through some transcendent force the ball looped onto the crossbar above the helpless, insufficient arms of Jordan Pickford and Origi nodded home from close range.

One day we might find out what possessed him to follow this by picking the ball out of the net and heading back towards the halfway line.

A goal that would be consigned to the annals of history had things panned out differently in the weeks that ensued.

Liverpool had seven straight league wins and were clinging courageously to the coattails of Man City, but needed a moment of magic at St James’ Park to take the title race to the final day.

We were still praying for a favour from either Leicester or Brighton but crucially we still had that prayer.

A one-in-a-million strike from Vincent Kompany 48 hours later appeared to be the final nail in the 2018/19 coffin, but Divock had other ideas…

Perhaps the greatest night in Anfield’s 138-year history, and it belonged almost inexplicably to Divock Origi once again.

His opening goal set the tone for the evening and shifted our perspective from blind faith to educated optimism.

His second sealed a comeback that defied all rational logic.

It was the most famous corner of all time, initiated by a 15-year-old ballboy more switched on than the entirety of Barcelona’s experienced back line and tucked away by a man who finds himself at the heart of historic triumphs.

Even when it makes no sense that he would do so.

This piece could’ve featured this goal alone and it would evoke the same fuzzy feelings attached to all the other goals throughout.

Istanbul is the greatest football story ever told, but it never had a crowning moment like this one.

Liverpool were minutes away from a sixth European triumph, but as is always the way they were making us sweat.

The man seemingly at the centre of every big moment in that record-breaking season had crowned it in the most fitting way possible.

If an archetypal Divock Origi goal exists then this might just be it.

It didn’t quite turn out to be as decisive as Sadio Mane’s last-gasp winner at Villa Park in 2019 when the chapter closed in May, but it had all the hallmarks.

Jurgen Klopp’s Liverpool are a team who famously don’t let up until all hope is gone, and when even that hope has evaporated there is an Origi-shaped threat for the opposition to withstand.

The touch from Salah was impeccable, and the composure from Origi reeked of a man who’d been in the situation plenty of times before.

He knew the dance.

A legend moves on

He wasn’t wrong was he?

Origi leaves Anfield having cemented legendary status at the club, and with an awful lot left to give.

Still only 27, the Belgian departs with the best wishes of all associated with Liverpool, and memories that some of the sport’s true legends would swap for in a heartbeat.

For all that surrounds the game, last-minute goals in big games are what we’re in it for. Nothing comes close to that rush, and Divock Origi has incomprehensibly become a specialist.

A cult hero he may be, but it is a Liverpool career like no other.

The goals in the 2019 European Cup run alone are very reminiscent of Luis Garcia’s ability to pop up at the right time en route to Istanbul in 2005.

It appears that AC Milan is the destination of choice for the next step in Origi’s career, and it feels like a perfect fit.

The opportunity to become a focal point of the Italian champions’ attack, as he had been during the early stages of Klopp’s reign, might well see him blossom as he enters the peak years of his footballing days.

Could there be some quintessential pieces of Origi magic in the coming Serie A season? You certainly wouldn’t put it past him.