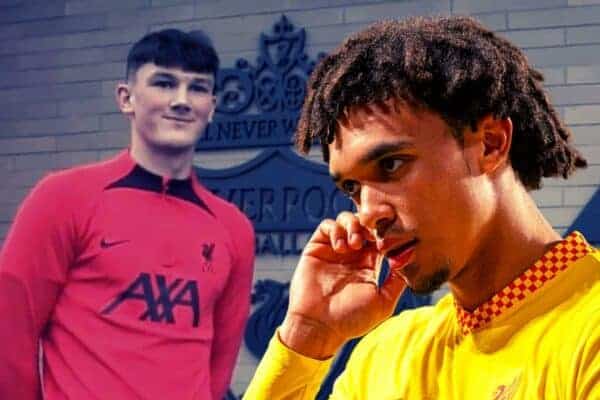 Trent Alexander-Arnold is a mainstay in Jurgen Klopp‘s side but even the manager knows he cannot play every game, and the numbers show just how important Calvin Ramsay could be in providing an option.

Alexander-Arnold continues to set new benchmarks in the right-back role, forging his own path and redefining the position one season after the next.

At 23, he already has won every trophy possible with his boyhood club across his 226 appearances to date, a tally that has him placed 95th in the Reds’ all-time appearance charts.

And while his importance to Klopp’s side is well documented, it’s also paramount that he has the chance to be rotated, as the length of his career could otherwise be directly impacted.

The manager said as much in the summer of 2020 when considering the arrival of Kostas Tsimikas and the benefits it would offer Andy Robertson.

“Robbo and Trent, let’s say, they cannot play every season 50-something games—it would limit their careers, to be honest, even when they come through,” Klopp said.

It did not come to fruition straight away with Tsimikas needing time to settle into the squad, but 2021/22 showed the benefits of having a reliable option behind Robertson.

There has, of course, been Neco Williams, Joe Gomez and James Milner to act as cover for Alexander-Arnold but a sense of resistance in doing so existed such is what the No. 66 offers the team.

Ramsay’s arrival from Aberdeen will see him afforded time to similarly find his feet and at 18, there will be little desire to place the weight of expectation on his shoulders.

He showed the confidence that he could be quick to settle in his first Liverpool interview and offers a similar attacking profile to Trent, perhaps creating less resistance in opting for that right-back rotation, eventually.

But there’s been no denying the importance of finding that right piece of the puzzle to both ensure Alexander-Arnold can be rotated and that his absence is not felt too severely.

Alexander-Arnold has played a total of 181 games for Liverpool across the last four seasons, a tally that rises to 196 when you include his minutes for England.

That makes for an average of 49 games per season since 2018/19, a number that Klopp conceded he cannot ask of Alexander-Arnold if he is to avoid ‘limiting’ his career.

There have already been a number of injuries come to the fore and the desire will not be for that to continue, especially when you consider he is still just 23.

With a World Cup campaign on the horizon and Liverpool to again make a charge across all four competitions, Ramsay’s development will be watched with a keen eye.

But Liverpool look in good shape to help avoid the warning Klopp offered for both Alexander-Arnold and Robertson with Ramsay and Tsimikas, and they have their world-class recruitment to thank.