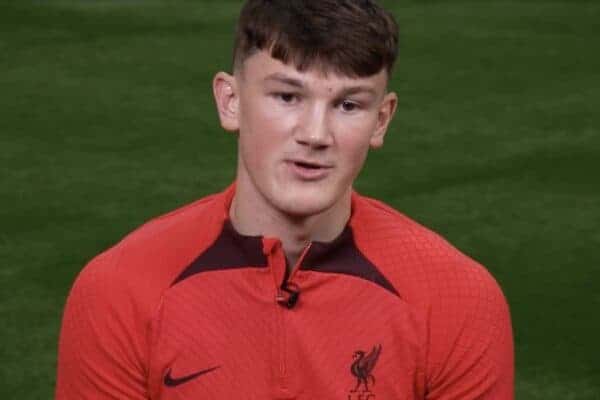 What Calvin Ramsay brings to Liverpool in his own words – ‘I’m similar to Trent!’

The lesser-known signing of Liverpool’s summer transfer window, Calvin Ramsay has compared himself to Trent Alexander-Arnold and explained: “I like to attack!”

Ramsay is the third new arrival at Anfield this summer, following Fabio Carvalho and record signing Darwin Nunez, but he joins with a much lower profile.

With a single season as first choice at Aberdeen under his belt, the 18-year-old is expected to join as a squad player, learning from the likes of Alexander-Arnold and Andy Robertson.

But while many supporters may not have seen Ramsay in action yet, in his first interview with LFCTV the youngster outlined his qualities as a player.

“Obviously, I’m a right-back, pretty attacking – I like to attack. I’m OK defensively as well, but my main attribute is attacking,” he said.

“I can put good crosses in, I like to get shots away, both feet, cutting inside, going down the line, linking up with my winger.

“But mainly I like to work hard, work hard for the team, put in that shift and that’s all I can do.

“I will try and do my best for the club. I’m looking forward to it.”

Ramsay was Aberdeen’s key creator last season, with nine assists in 33 games, while only Rangers’ James Tavernier (100) produced more chances from defence than the teenager (42).

It is no surprise, then, that Liverpool’s No. 22 feels he has a similar profile to that of Alexander-Arnold – as he looks to learn from his new team-mate.

“He’s just been brilliant, everyone in football knows that,” Ramsay continued.

“Because I’m a similar position, even before there was interest from Liverpool I looked up to him.

“He’s similar to the way that I play. His attacking, his crosses, he can use both feet, his passing range is obviously quite similar to mine.

“Just being in here every day, with not just him but all the players, top professionals, I’m going to learn a lot and become a better player.”

And like Alexander-Arnold, right-back was not Ramsay’s natural position as a youngster, making the move from midfield later in his development.

“I think I’m quite versatile as well, can play in a few different positions,” he added.

“I started off in midfield, coming through Aberdeen’s academy, then I got moved out to right-back.

“[My] first game [at right-back] was against Chelsea in a tournament, so it was a difficult game to go right-back for but I did well.

“I’ve played right-back ever since.

“I can play a few positions, I think I’m quite composed on the ball, can find a pass, get shots away.

There is no expectation for Ramsay to come in and challenge Alexander-Arnold for his position from the off, and first he is looking to make a good impression in pre-season.

However, the £6.5 million signing is confident he has the potential to step up to life in the Premier League.

“Because I’ve done well at Aberdeen, I knew the speculation would come. But no, I’m just buzzing. It’s a dream come true to be here really.

“It was a dream come true to play for Aberdeen, and now to be at one of the biggest, if not the biggest, clubs in the world, it’s a massive achievement.

“I’m looking forward to trying to show the fans what I’ve got.

“Hopefully I can come in pre-season, show everyone at the club, the staff, the players, what I’ve got, then I’ll see what happens from there.”