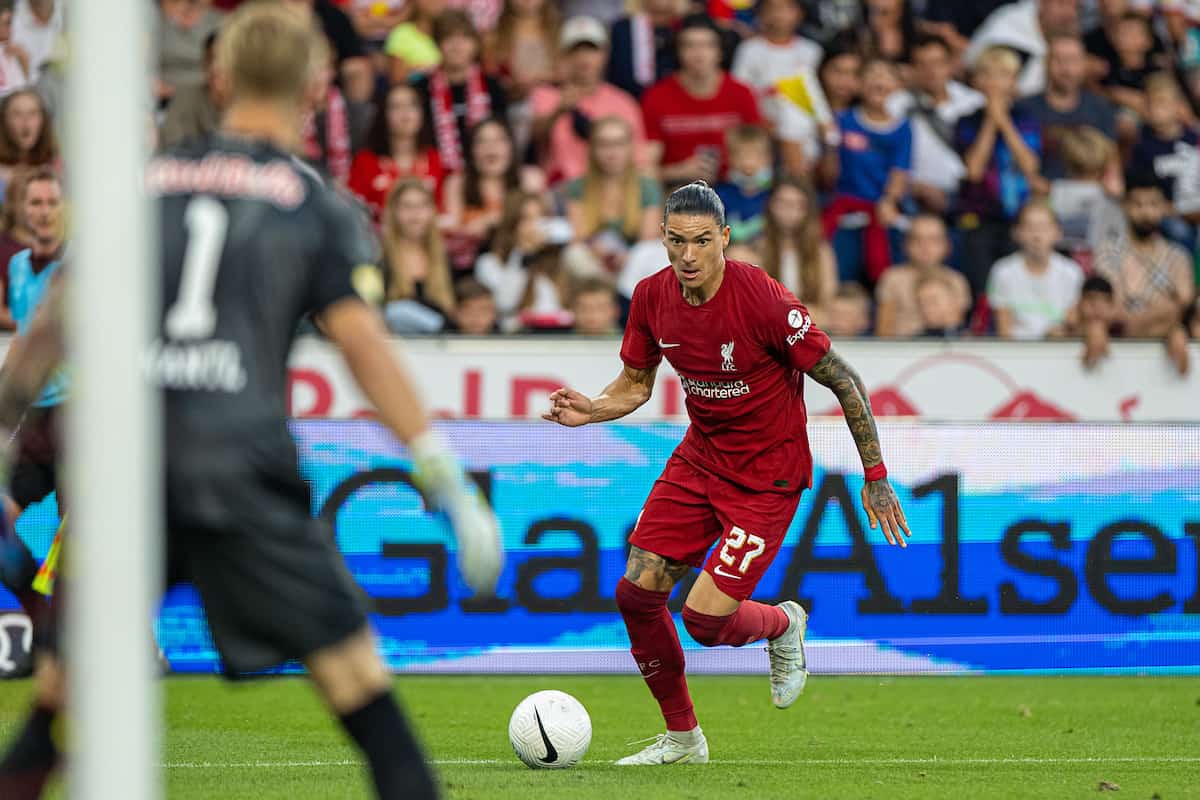 Liverpool went through another welcome workout as they took on Salzburg on Wednesday night, with plenty of positives despite a 1-0 defeat in Austria.

When Jurgen Klopp named his 31-man squad to travel to Austria last week, it was encouraging to see Calvin Ramsay among those on the plane.

But the £6.5 million signing from Aberdeen had only joined his team-mates to undergo light training, receive further treatment for the injury he arrived at the club with and, importantly, join in with the pre-season initiations.

With Trent Alexander-Arnold rested from the start in Salzburg, it handed 17-year-old Isaac Mabaya another opportunity at right-back.

Though the likes of Luke Chambers and Bobby Clark have rejoined the under-21s after an initial taste of first-team action, Mabaya has remained with the senior squad due to Ramsay’s absence.

Against Salzburg, he showed more signs of the tenacity, thrust and end product that could make him an interesting option in the role in the long term.

We should never expect too much in pre-season, but especially so during a gruelling training camp under the Alps.

There have been punishing double and triple sessions for Liverpool out in Austria, and it was no surprise, then, that their meeting with Salzburg saw heavy legs on show.

It was particularly evident in midfield with Naby Keita and Curtis Jones along with the centre-backs Ibrahima Konate and Joe Gomez, but any criticism of the performances in Salzburg should be tempered.

Along with the demands in training and the change in altitude, Liverpool came up against a side who were already two games into the campaign proper, including a 3-0 win over Austria Wien less than a week previous to kick off the Austrian Bundesliga.

As Klopp will remind you, it is all part of the plan; preparing for the entire season, not just these summer friendlies. 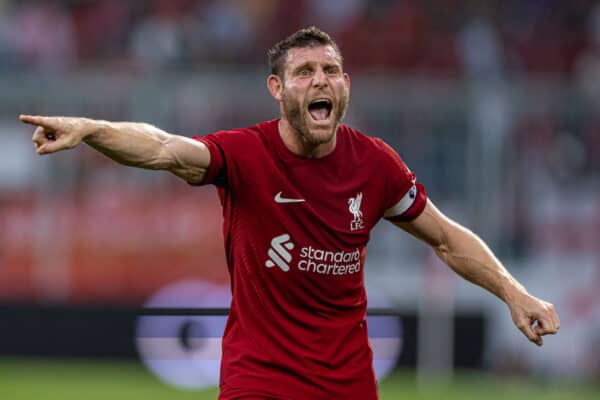 When Milner agreed to sign a new one-year contract this summer, it will have been on the understanding that he would, again, be required to slot in wherever Klopp saw his talents fit best.

Unfortunately for the vice-captain, throughout pre-season this has largely come at full-back, owing to injuries to Ramsay and, now, Kostas Tsimikas.

But the 36-year-old remains a useful option at both left-back and right-back, while he will hope for starts and extended minutes from the bench in midfield when the campaign gets underway, too.

No plan for Morton? 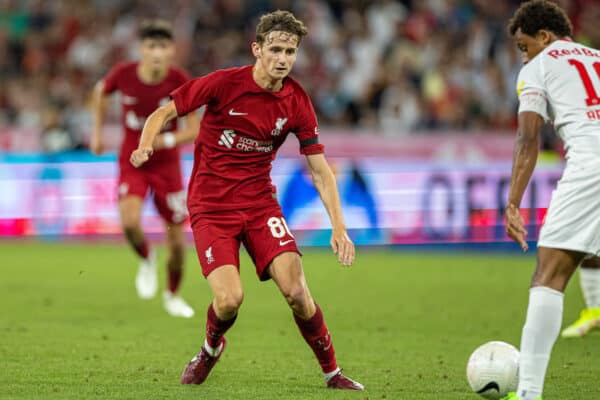 Earlier in the summer, when Klopp pleaded for patience in calls for a new midfield signing, he highlighted Tyler Morton as an “absolutely exceptional” option.

“We don’t force him to play as a controlling No. 6 in a Premier League game,” the manager explained. “He’s training as an eight, and it’s like ‘wow, how good is that?!’. He’s still here.”

But there appears to be an agreement in place to allow Morton to join Blackburn for the season…just not yet.

That, it is claimed, has been informed by a lack of depth in the midfield ranks – though only Alex Oxlade-Chamberlain is out and Stefan Bajcetic, ironically shining as a No. 6, is among those stepping up.

Meanwhile, Morton was unused against Leipzig and granted a meagre 15 minutes against Salzburg.

If the plan is to send the 19-year-old to Ewood Park, would he not benefit more from settling into his new surroundings and getting to know his new team-mates than barely playing in pre-season for Liverpool? 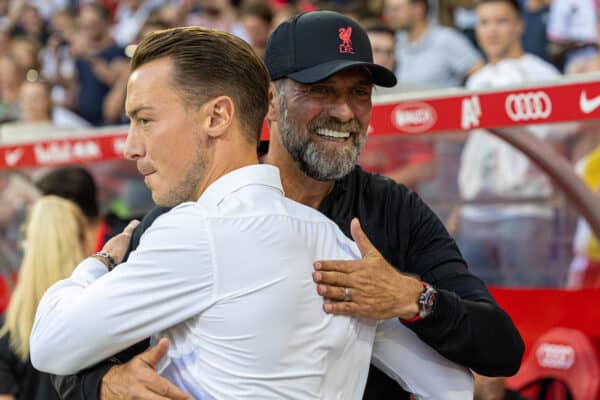 Before the game, Klopp was effusive in his praise of the “project” among the Red Bull clubs, with Salzburg hailed for their ability to build despite the continued loss of high-value talent.

This summer it was Karim Adeyemi who left Austria, joining Borussia Dortmund in a deal worth £32.5 million amid claims of interest from Liverpool.

Just as Adeyemi had stepped up to replace Patson Daka, who himself filled the shoes of one Erling Haaland, Salzburg have another gem in their midst in 19-year-old Benjamin Sesko.

The Slovenian was a handful from the off, opening the scoring on the half-hour after a smooth move, and it would be no surprise if he was on the Reds’ radar in the months to come.

There is a strong relationship between Liverpool and Red Bull, as evidenced by back-to-back friendlies with RB Leipzig and Salzburg, and it could benefit them in the future. 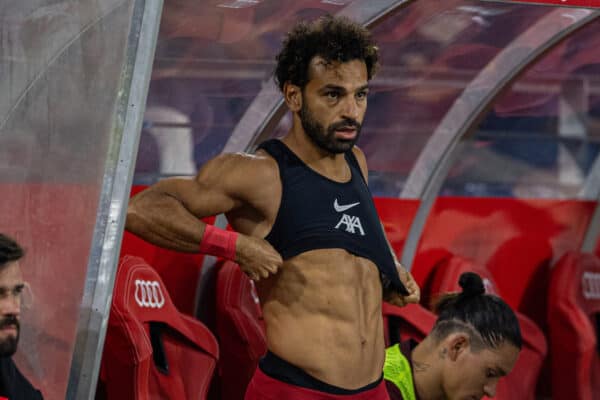 There was a surprise when the teamsheet was announced at 5.30pm, with a much-changed Liverpool side lining up from kickoff at the Red Bull Arena.

But there was a plan in motion, with the majority of those who played an hour against Leipzig on Thursday evening given 30 minutes against Salzburg, and vice versa.

It is a unique pre-season, and with the Community Shield to plan for at the weekend, the minutes needed to be spread out.

As Klopp made eight changes on the 60-minute mark, though, he almost certainly revealed his XI for the clash with Man City.

So when that teamsheet is released at the King Power on Saturday evening, it should read: Adrian; Alexander-Arnold, Matip, Van Dijk, Robertson; Fabinho, Henderson, Thiago; Salah, Diaz, Firmino.

And don’t bet against that same side, hopefully with Alisson in for Adrian, taking to Craven Cottage a week later too.