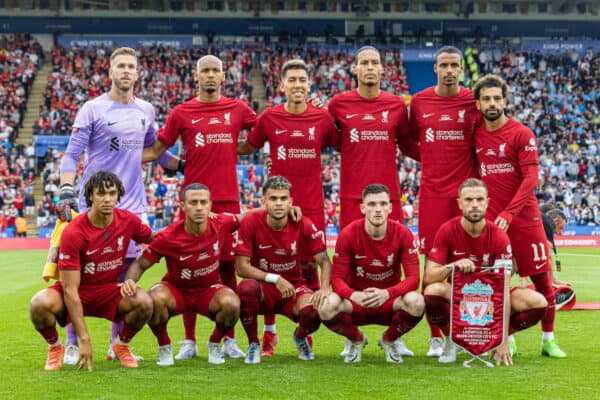 Liverpool beat Man City 3-1 to win the Community Shield on Saturday, with Darwin Nunez scoring on his competitive debut.

Adrian started in place of the injured Alisson and Caoimhin Kelleher, throwing in a hit-and-miss performance at the King Power.

The Spaniard made a number of routine saves, but was shaky on the ball and poor for Julian Alvarez’s equaliser, not clearing the danger.

Not good enough, being brutally honest.

The 23-year-old was impressive, opening the scoring with a deflected strike and showing typical class in possession.

One inch-perfect cross should have led to Andy Robertson opening the scoring and he got the better of Jack Grealish at the other end.

Didn’t track back well in the lead up to City’s goal, though.

Matip was preferred to Ibrahima Konate at centre-back, producing the kind of calm, cultured display we have grown to love down the years.

Erling Haaland tried to get the better of him, staying away from Virgil van Dijk, but City’s big-money signing had little luck in the battle.

Looks likely to start at Fulham next Saturday.

Van Dijk enjoyed a stunning return to top form after overcoming an ACL injury last season and he looked as good as ever here.

Bar one stray pass out of play, the Dutchman cruised through proceedings, also making some key interventions inside the area.

The best centre-back in the world – there is a chasm between him and anyone else.

Robertson is hopefully about to embark on another relentless season of wall-to-wall appearances, and he looked full of beans on Saturday.

His missed chance from Trent’s aforementioned cross was a poor effort – he should have squared it to a team-mate – but he was good against Riyad Mahrez.

Not necessarily vintage Robbo – his shooting remains erratic! – but not far from it.

If the Community Shield is only deemed a friendly by some, Fabinho didn’t receive the memo!

The 28-year-old was tenacious at the heart of the midfield, biting into tackles, committing fouls and fuming at referee Craig Pawson on more than one occasion.

Fabinho has looked a little rusty in some of the summer games but this was much more like it from him.

Drink in this lad while he’s still around – what a footballer.

Thiago was masterful against the Premier League champions, standing out as the best midfielder on the pitch, both on and off the ball.

One outrageous piece of play in a tight space will be rewatched by millions of supporters and he was a joy to watch.

Henderson was named in the starting lineup instead of the likes of Naby Keita, Harvey Elliott and Curtis Jones, indicating that he will complete the midfield at Fulham.

The captain made a slow start, losing the ball a couple of times, but he grew into the game, nearly teeing up Luis Diaz with a lovely cross.

He pressed endlessly and helped Liverpool outplay their rivals, but will want to be slicker on the ball moving forward.

Salah fell off a cliff by his outrageous standard towards the end of last season, having run himself into the ground, but this was a hugely promising performance.

The Egyptian King tormented Joao Cancelo and Nathan Ake, also assisting Trent’s opener, and he looked like producing a moment of magic whenever he got the ball.

Diaz hasn’t had the most sparkling of pre-seasons and he was quieter than others in an attacking sense.

His pressing off the ball was as relentless as anyone, though, as he and Kyle Walker locked horns, and he helped Robertson out all evening.

It feels like he is edging himself into the new season, rather than starting like a house of fire.

Firmino has looked good this summer and he led the line over Darwin Nunez, in what was an expected call by Jurgen Klopp.

Liverpool’s No. 9 did well overall, holding the ball up, working hard and linking with the midfield, with one poor shot one of the few things he did wrong.

Still has so much to offer.

How’s that for a debut!

Denied by Ederson when sent clean through, heavily involved in the penalty, headed wide late on and then scored.

Neat and tidy, kept the ball ticking over.

No time to make an impact, but a big occasion for the new signing.

Only on for a matter of seconds.

The boss talked up the importance of the game in the days beforehand, insisting it was a meaningful, and the performance he got from his players suggested as much.

Two defeats in the Reds’ previous Community Shield appearances under Klopp clearly motivated him and his players.

Liverpool suffocated City for much of the first half, also looking more rhythmic on the ball, and they look more primed to start the season on fire.

Another trophy for the boss, who has now won every domestic silverware in England.