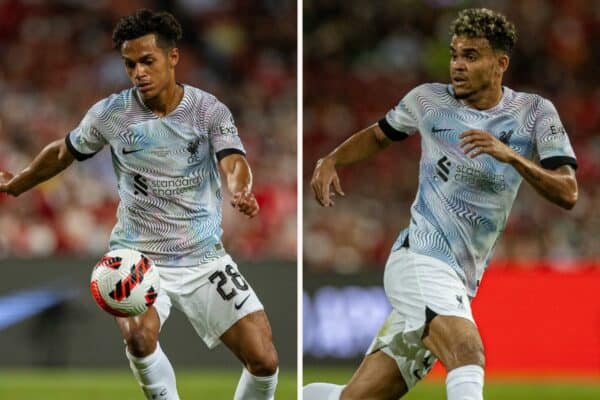 Hours after the soft launch of their new Nike away shirt for 2022/23, Liverpool revealed the full kit in their pre-season friendly opener against Man United.

The Reds are back in white for away games this season, with the reaction mixed after the club’s official unveiling of an iridescent all-over design.

Liverpool have described the shirt as ‘dizzying’, and it is certainly an ambitious one.

That 8am launch was followed, six hours on, by kickoff in Bangkok as Jurgen Klopp‘s side took on Man United in the opening friendly of their pre-season schedule.

They emerged from the tunnel at the Rajamangala Stadium wearing their new away kit, with it now confirmed that Liverpool will pair the shirt with white shorts and socks.

Meanwhile, Alisson wore all green in Thailand, though it is unclear at this stage whether this will permanently accompany the away kit, with goalkeeper kits interchangeable.

Liverpool will, of course, be wearing red for home games, with a plain design provided by Nike, while the third kit – which is as yet unconfirmed – is expected to be dark green.

The new away kit is only available online now via the official LFC store, with a wider release on August 19, alongside new training kit.

Pre-season continues on Friday with a meeting with Crystal Palace in Singapore, and then further friendlies against RB Leipzig (July 21), Salzburg (July 27) and Strasbourg (July 31).

Man City are the opposition for the Community Shield on July 30.