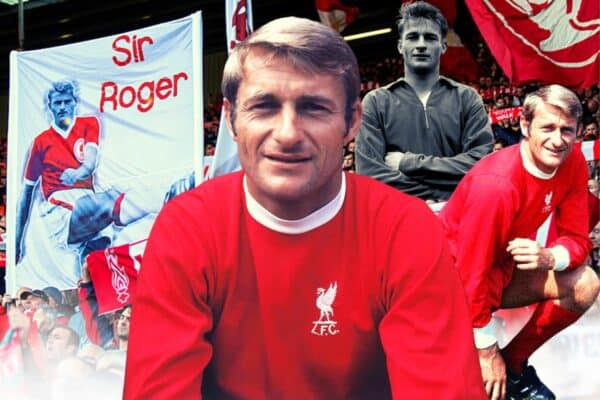 Roger Hunt: The striker knighted by the Kop, who had 55,000 at his testimonial

It’s April 1972, and the streets of Anfield are rammed. The weather is awful and torrential rain lashes the streets, drenching supporters as they pour into the old stadium on Walton Breck Road, causing turnstiles to creak, rattle and spin.

A full 30 minutes before kickoff the gates are closed; 55,214 lucky people made it inside, while thousands more are left waiting, wet and bitterly disappointed, on the pavements around the ground. Many would wait, filling the pubs around the ground, shivering in wet clothes until the final 20 minutes of the game.

They’d hope to get in for free as the exit gates are opened in readiness for the final whistle.

This is no European night under the floodlights, however. Nor is it a derby match, FA Cup tie or a clash with a hated rival. Instead, this is a testimonial for a beloved former player, one who had left the club two years previously.

The man in question was the great ‘Sir’ Roger Hunt, a player knighted by people who mattered more to him than any monarch: the Kopites who worshipped every other Saturday.

He had served the club for a decade between 1959 and 1969, before leaving for Bolton Wanderers.

Start as you mean to go on

Hunt made his debut on September 9, 1959, in a 2-0 win against Scunthorpe United. Of course, he scored. In an interview with LFCTV, Hunt spoke of how he made his breakthrough thanks to an injury to Billy Liddell, and how this goal had settled him down:

“I remember that the game was a lot quicker than what I was used to. I was playing more of centre-forward role and I was more of an inside forward as we called it back then.

“We were one-nil up when we got a free-kick around the hour mark. Jimmy Melia spotted me and played a short pass into my stride. I looked up and hit it instinctively.

“I knew it was in as soon as I struck it and I can’t describe how good it felt to see it smash in off the crossbar. It wasn’t in front of the Kop, but it made me feel so much more confident for the rest of the game. It was a big moment for me, but there weren’t many celebrations afterwards.

“I had a cup of tea and luckily enough my father had been at the game so I managed to get a lift back home with him. The ride home capped a great day.”

His humility and ability to remain humble despite his greatness would serve him well at Anfield, and create a strong bond with the Reds faithful. Press reports were quick to identify the boy with a bright future, but they had no idea of the burning desire that would ultimately mark him out as one of Liverpool’s deadliest strikers.

Hunt’s career was built on talent, sure, but it was hours of hard work on the training ground that moulded him into a superstar adored by tens of thousands, and who inspired future strikers like John Aldridge. Speaking later of his breakthrough season, Hunt would recall:

“I knew perfectly well that I wasn’t an out-and-out natural, the sort who can make a ball talk so it was down to me to compensate for it in other ways.

“I made up my mind that if I didn’t succeed at Anfield then it wouldn’t be for the lack of determination.

“From the first day I threw myself into training, ran and tackled for everything and practised my ball skills at every opportunity.”

Hunt played 492 times for Liverpool, scoring 285 times. His most prolific season was the 1961/62 promotion campaign, when he scored 42 goals in all competitions (41 in the league). He finished eight consecutive seasons as top scorer, and in one of them he scored 41 goals in 41 games, including five hat-tricks.

His goals literally lifted the club from the Second Division into the first.

He had left Liverpool with an equally impressive medal collection. In those 10 years he had collected two First Division titles and one Second Division Championship medal.

He was also a key player in the Reds’ run to their first ever FA Cup triumph in 1965. His goal, scored three minutes into extra time, put the Reds in front for the first time in a gruelling match against Leeds. Billy Bremner would level, but Liverpool wouldn’t lie down and the FA Cup was finally theirs, thanks to an Ian St John winner.

His final goal came in a European Fairs Cup second round, second leg tie at Anfield, against Portuguese side Vitoria Setubal, on November 26, 1969.

Hunt and youngster Alun Evans came off the bench in a double substitution in the 46th minute. With Liverpool 2-1 down going into the last two minutes of normal time, Evans levelled before Hunt sent the Kop wild with a 90th-minute winner.

His final bow came a little over two weeks later in a 4-1 defeat to Manchester United when he again came off the bench. This time he couldn’t turn the game around.

However, a decade at the football club is worth more than any one game, and it meant he was entitled to a testimonial, but in truth, this was about far more than ‘time served’.

More than a testimonial

The rules of the period stated that players could only be awarded such an honour once they had retired. So, supporters had waited three years to pay their respects. It is, therefore, little wonder that supporters turned out in such large numbers to celebrate their hero’s special night.

The opposition was an ‘International XI’ made up of veterans of the 1966 World Cup-winning squad, including future Everton manager Howard Kendall, and supporters were treated to a 14-goal thriller.

Hunt’s Liverpool would emerge 8-6 winners, and the man of the moment scored a hat-trick.

Of course the result wasn’t important. This was a chance to say farewell and pay tribute to a star who had lit up Anfield for a decade, bringing so much joy to the people of Liverpool. The crowd did not disappoint.

Roger had spells at Bolton and Hellenic before hanging up his boots in 1972.

Sadly, Roger passed away on September 27, 2021, at the age of 83. He was honoured in the city that gave him fame and adulation for so many years, where family and supporters said farewell with a funeral at Liverpool’s Anglican Cathedral.

He will forever be a Liverpool legend.