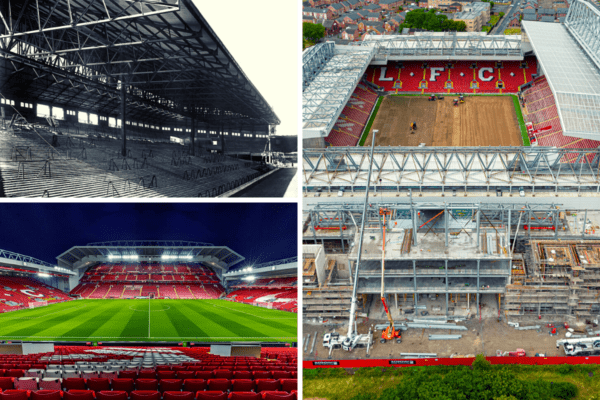 The 130-year evolution of Anfield: From muddy embankments to 61,000 seats

Anfield has undergone some remarkable changes in the 130 years that it has been the iconic home of Liverpool FC.

Having been built in 1884, Anfield was originally the home of Everton and did not house Liverpool FC until the club’s formation in 1892.

In the 130 years since, the stadium has drastically evolved and remains one of the most legendary grounds in the game.

It’s a special place to millions and will continue to be for many more years to come. Here, we go back in time to see how Anfield has changed throughout the years.

In 1928, a significant expansion took place to allow for a roof and 30,000 fans to stand and watch the Reds.

The year 1959 saw the appointment of the great Bill Shankly, a few years before Anfield would undergo another makeover.

Between 1963 and 1973, the Kemlyn Road Stand, now known as the Sir Kenny Dalglish Stand, and the Main Stand both underwent redevelopment.

The departure of Shankly saw Bob Paisley assume the top job in 1974, where a new era of illustrious success was to follow.

From the 1960s to 1990s, the Boot Room was a meeting place where the Liverpool coaching staff would meet to discuss the team, tactics and ways of defeating their next opponent.

The famous This Is Anfield sign in the stadium’s tunnel holds a special place in the club’s history. The one seen here behind Paisley was the second version to take its place and remained in place until 1998.

It would not be seen until 2012 after a third version took its place, but it’s now back where it belongs – although the tunnel has certainly changed following the Main Stand redevelopment.

Flagpole Corner has been an Anfield meeting point for generations of Liverpool supporters.

Situated at the Walton Breck Road/Kemlyn Road junction (now the corner of the Kop and Kenny Dalglish stands), the flagpole usually sees a Liver Bird flag flying high in the sky.

In 1982, the Shankly Gates came to be. They were formally unlocked by his widow, Ness, 11 months after he passed away.

They did move location following on from the Main Stand construction in 2016, moving further down Anfield Road to the entrance to the Sir Kenny Dalglish Stand car park.

You may notice the coloured block of seats at the Anfield Road End, this was Paisley’s doing.

He watched the reserves at the ground and found the red shirts would get lost in the red seats around the stadium and felt having an array of colours would help see the players better!

In the 1991/92 season, it was time to add a second-tier onto the Kemlyn Road Stand, later known as the Centenary Stand – it officially opened in September 1992.

It would later become the Sir Kenny Dalglish Stand.

A tribute to the king.

The Kop, of course, underwent a significant change after the Taylor Report called for football stadiums’ standing terraces to be replaced with all-seater stadiums following the tragic events at Hillsborough.

The 1993/94 campaign would be its last and the occasion was marked with an emotional send-off.

In 1997, an upper tier would be added to the Anfield Road End in a boost to capacity.

It has remained in place for over 20 years and will be expanded as part of the ongoing Anfield Road End redevelopment.

After owners FSG decided to remain at Anfield instead of building a new stadium in Stanley Park, work started on demolishing the old Main Stand in favour of a new three-tier stand.

The end product was simply stunning, increasing the stadium’s capacity to just over 54,000.

A move from FSG that reflected Liverpool’s on-field ambitions with those off it.

The redevelopment of the Main Stand also saw a freshening up for the famous Anfield tunnel.

Previously a tight space with steps down, and then up to the pitch, the tunnel area is now on the same level as the playing surface and a lot more spacious.

The famous This Is Anfield sign remains above the main entrance to the pitch.

The current stadium dominates the skyline and will continue to do so with the new Anfield Road expansion due to be completed for the 2023/24 season.

Anfield’s capacity will rise to 61,000 and will look something like this. A sight to behold.

130 years of incredible memories and so many more to come. We really are blessed to be able to call Anfield home.