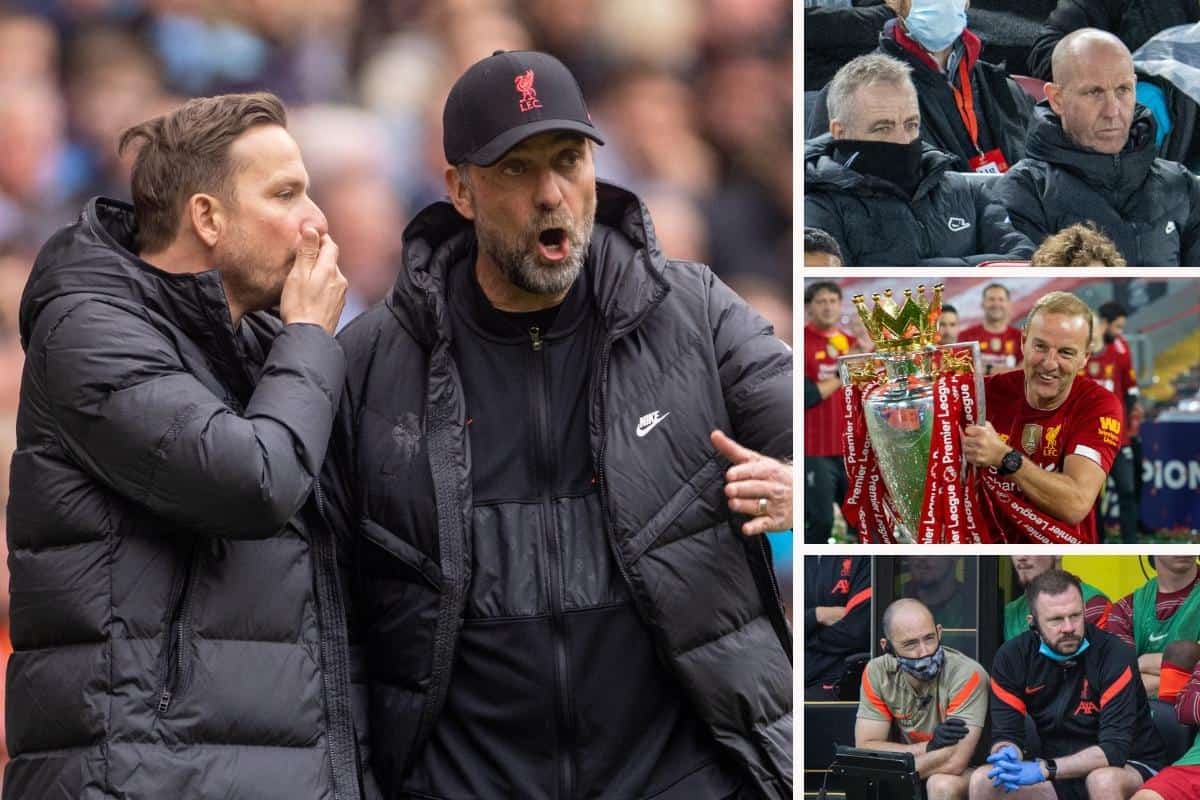 While the focus centres on the starting XI and substitutes every matchday, there is a handful of Liverpool staff behind the team that takes up a spot on the touchline. But who are they?

Liverpool have enjoyed a breathtaking transformation since the arrival of Jurgen Klopp back in 2015, with the changes on the field also matched by savvy appointments off the pitch.

The manager is a team player and always attributes his success to the help of those around him and while there are many who work behind the scenes, we also see plenty of these faces on a matchday.

So who are the staff you readily see on a normal matchday for Liverpool? 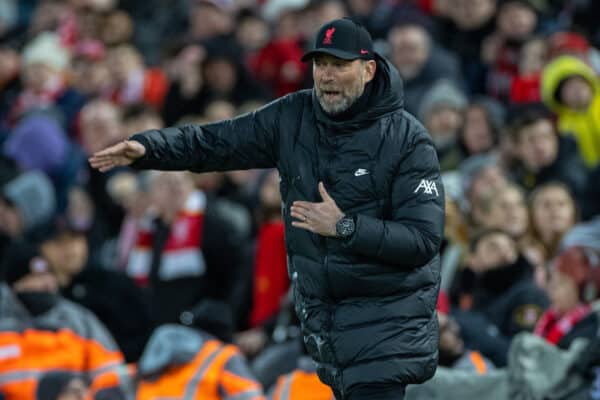 Of course, we have the top man front and centre.

If he’s not sitting next to Peter Krawietz taking the game in or talking tactics and substitutions, he’s prowling the technical area and showing off his incredible range of facial expressions.

While at the game you can often find yourself watching him instead of what’s happening on the field! 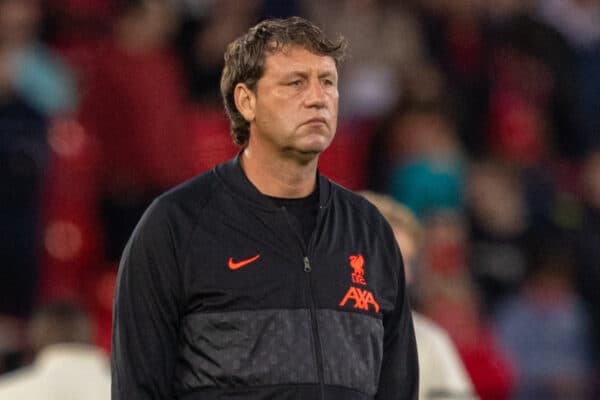 Well-known by his nickname ‘The Eye’, Krawietz is the manager’s longest-serving right-hand man having worked together at Mainz and Borussia Dortmund before moving to Liverpool.

He is often seen with his book of notes, giving substitutes their final instructions and, of course, being one of the first Klopp turns to when the Reds score. 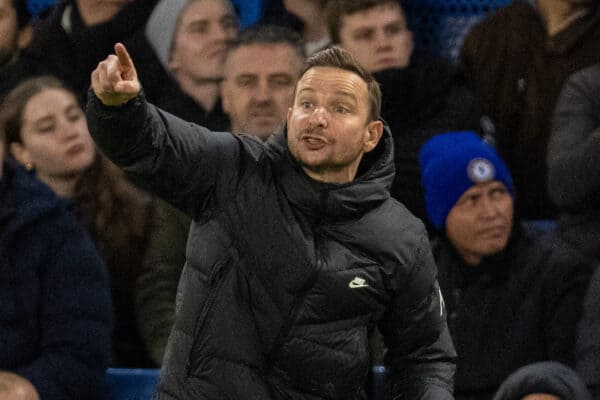 The other right-hand man to Klopp is more of the vocal one, and it’s no wonder he has been called the “energiser” such is his approach during training and games.

Lijnders isn’t shy in taking to the technical area during games and he commanded the box himself when Klopp was forced to miss the trip to Chelsea in 2021/22 due to Covid. 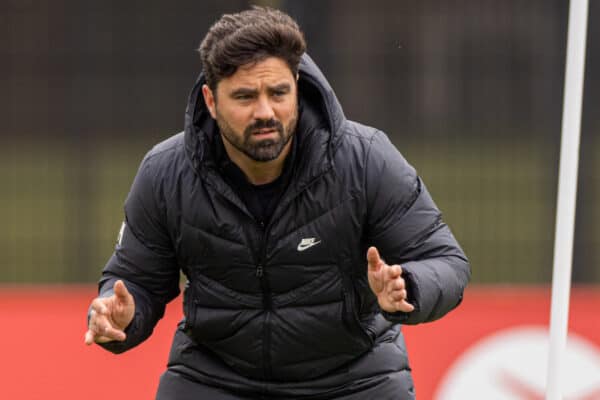 Officially, Vitor Matos is Liverpool’s ‘elite development coach’ – a role previously filled by Lijnders and intended to focus on the young players making the step up to the first team.

But the Portuguese, who joined the club in 2019, is far more hands-on than just that. He, Lijnders and Krawietz lead first-team training sessions and on a matchday he’s always there alongside his fellow assistants. 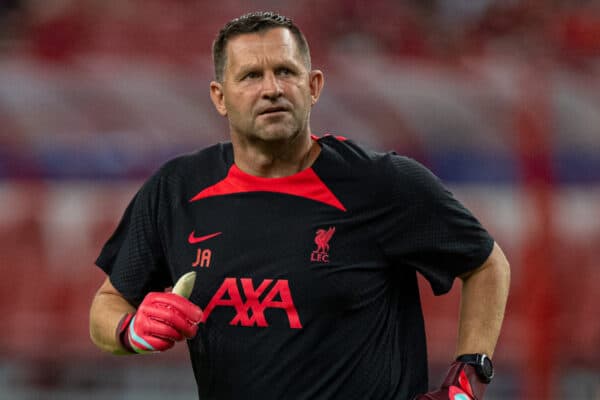 The longest-serving member of the first-team staff, Achterberg’s presence is one that has you smiling when the Reds score as he is one of the first shooting out of his seat in the dugout.

The passion he exudes is second to none and he’s not afraid of donning shorts on the bench when it’s baltic outside.

He is also the man in charge of passing on the substitute notes to the fourth official and even does the notice board himself for Champions League games. 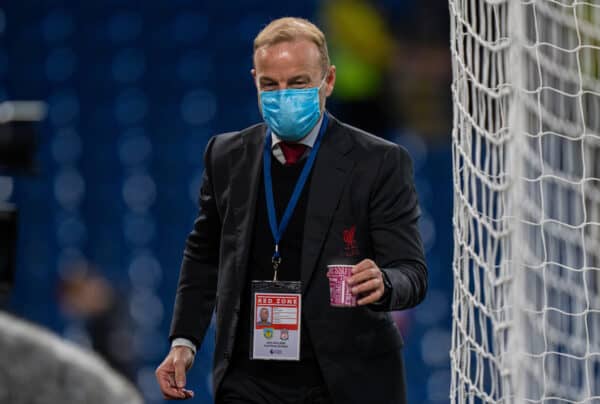 If you’ve wondered who the person is who readily celebrates with Klopp and his players on the touchline after a win, standing in the tunnel and donning a suit, well, wonder no more!

It is Ray Haughan, the first-team operations manager, previously player liaison officer, who ensures life runs as smoothly as possible for the players and the staff everywhere they go.

For example, he was key for the Reds when they returned to training in a Covid-safe environment back in 2020 and Klopp described his work as “unbelievable.” 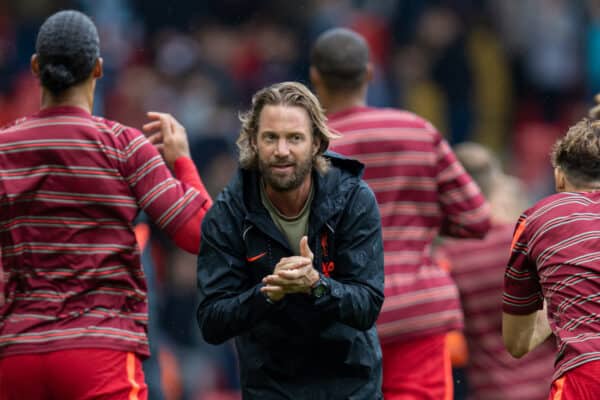 Kornmayer’s role on a matchday is one we will all readily see before kickoff as he takes charge of the warm-up before taking his place on the bench for the match.

The German arrived for the start of the 2016/17 season and has played a key role in overseeing the fitness of the squad and he sets high standards for all to follow.

Morgan has enjoyed two spells with the club and his second started back in 2020, and he is the one you see running out to the players who need assistance with a knock or an injury, as seen to Thiago‘s right in the picture above.

He will then communicate with the bench if a substitution is needed or the player is okay to continue, and both Steven Gerrard and Jordan Henderson have spoken highly of his work and dedication.

Moxon is another member of staff who is seen treating players on the pitch throughout matches, joining Morgan as they assist whoever needs attention.

He first joined the club as head of sports medicine and fitness at the academy in 2016 before his switch to the first team in 2020 as club doctor. 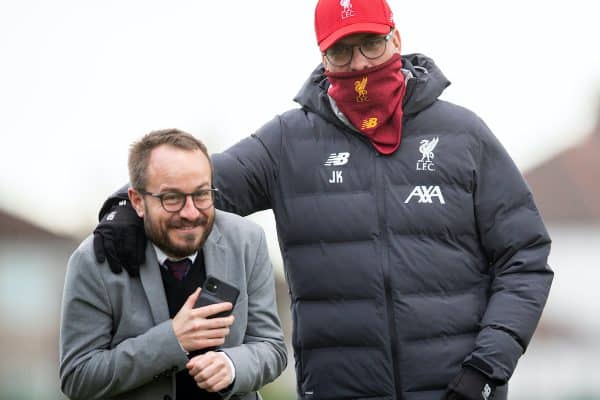 McCann is readily seen by Klopp’s side during press conferences and pre and post-match as the manager navigates his media duties.

His voice is what you hear as he directs journalists as they wait to ask questions, and he looks to have forged a strong bond with Klopp having worked together since 2015.

They even shared an apartment together when the Premier League resumed after lockdown in 2020. 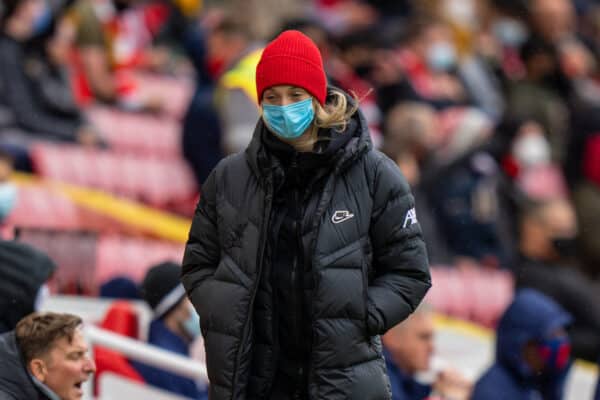 Nemmer has revolutionised the way Liverpool consume their food both at Kirkby and at Anfield and beyond, and has received plenty of praise for her work from the manager and the players.

And her responsibilities extend to every matchday with the right nutrition required to aid in recovery during what is often a relentless schedule. 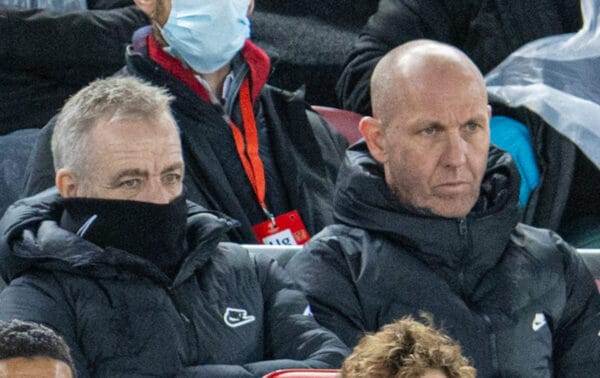 The pair take a position at the back of the bench, at Anfield at least, with Small (left of picture) responsible for giving massages to the players before and after the game, and at half-time too.

Radcliff (right of picture), meanwhile, ensures the players are all kitted correctly at training or during home and away games, making sure each player has their individual needs catered to. 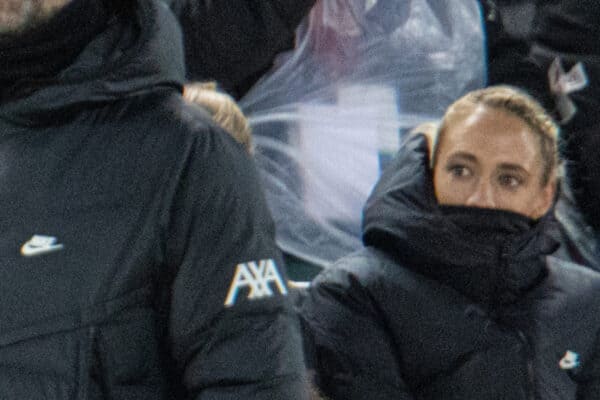 Aschenbrenner joined the first-team staff in 2021 and arrived with plenty of experience with amateur and professional athletes in Germany.

Her role is to help each player perform to their maximum while also helping to minimise the rise of injury and has been regularly spotted at games since arriving.