Nat Phillips makes a surprise start for Liverpool tonight, as they host Crystal Palace in their first home game of the Premier League season.

The Reds are back at Anfield this evening as they take on Palace, looking to improve on their opening 2-2 draw at Fulham nine days ago.

That trip to Craven Cottage was a chastening experience for Jurgen Klopp, who questioned the attitude of his players in the aftermath, challenging them to respond.

And though injuries continue to pile up with issues for Thiago and Joel Matip in the buildup, it is another strong Liverpool side to take to the field tonight.

Alisson starts in goal, with Phillips taking Matip’s place in the back four alongside Trent Alexander-Arnold, Virgil van Dijk and Andy Robertson.

Fabinho keeps his place in midfield, but the absence of Thiago sees the impressive Harvey Elliott handed a start next to James Milner.

Mohamed Salah and Luis Diaz are retained on the flanks, with Darwin Nunez leading the line as replacement for Roberto Firmino. 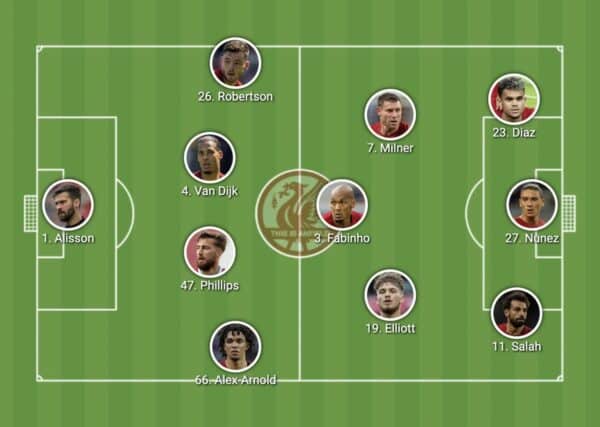 Klopp will look to manage the fitness problems throughout his squad, and is at least buoyed by the return of Kostas Tsimikas and Naby Keita, who take their places on the bench.