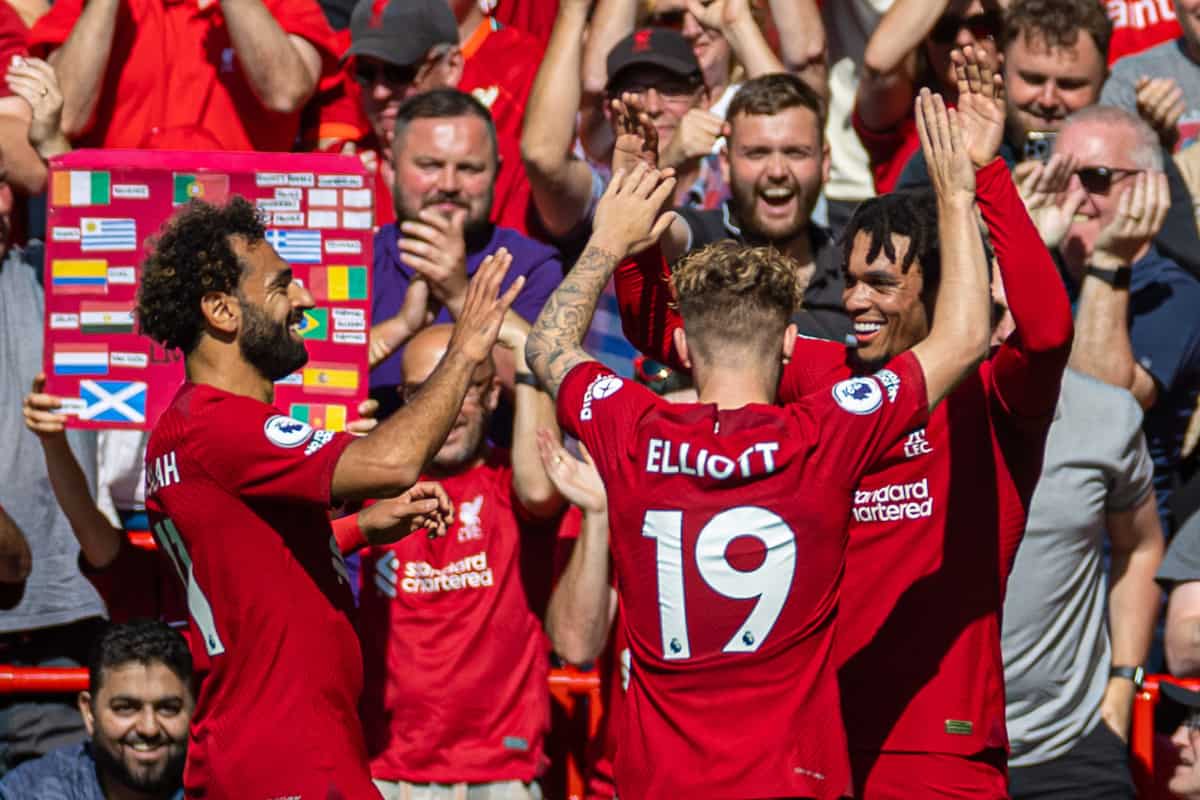 “That WAS Liverpool!” – Fans in awe of “ruthless” Reds’ 9-goal statement

As responses go, Liverpool’s was emphatic. A 9-0 win against Bournemouth after three games to forget was what was desperately needed. And fans enjoyed the show.

Jurgen Klopp issues a rallying cry on Friday, saying it is “us against the rest of the world,” and that mentality was shown from the off at Anfield.

Luis Diaz got the party started with a goal after just three minutes, Harvey Elliott, Trent Alexander-Arnold, Roberto Firmino and Virgil van Dijk following – all in the first half.

An own goal straight after the break brought up number six, with Firmino, Diaz and Fabio Carvalho then going on to make it NINE, Liverpool’s biggest Premier League win and the joint biggest in the top flight.

The win was emphatic, ruthless and merciless. Exactly what Liverpool fans had hoped to see.

Emphatic in all areas. Liverpool back to putting down the big statements when backs are up against the wall. Interesting final few days of the transfer window ahead .. #LFCdigest

Winning 9-0 after picking up three terrible results is as much of a cliché statement win as you’re ever likely to see.

That’s what you call a response, ruthless from Liverpool. I’ve missed this feeling ?

5 goals, about 10 subs, various stoppages, and just 4 minutes added. But that's me being picky ?. A perfect afternoon in so many ways, with various teenagers starring, and the goals flowing. Tons of players missing, but the ones who were fit were outstanding today.

There are very, very few things I've yearned for in my life more than th e tenth there hahaha.

Unquestionably wanted that more than I've ever wanted them to win a domestic trophy.

Wow, where has this @LFC been? Now that's what I'm talking about. Relentless, intense, good movement. Just brilliant. #LIVBOU

As poor as Bournemouth were, Liverpool were v impressive. It felt a lot more like a Liverpool performance with their intensity & attacking threat back! Great win! #LIVBOU

No doubt Bournemouth were accommodating opponents today but that is still a truly remarkable performance from Liverpool. It's also a result that could kickstart their season after a patchy start.

I dunno who the hell those lads were in the first three games, but that WAS Liverpool.

Three assists from full-backs, goals from set pieces, intensity to beat the band and Firmino running it back to 2019.

Bournemouth are awful, but, man, that was enjoyable.

What a scoreline from Anfield! 9-0!

Asked for a prediction for #LIVBOU last night on @bbcmerseysport, I went for the Reds to win 3-0, but said I thought someone was going to be on the wrong end of a 5-0 against #LFC soon.

Oh me of little faith…

Talk about a way to get your first win! It just makes you wonder where this Liverpool performance has been hiding in the first few weeks of the campaign.

With the spotlight only shining brighter on the Reds’ woes, the three points are huge with the schedule now to resume its relentless pace with the Champions League now on the horizon.