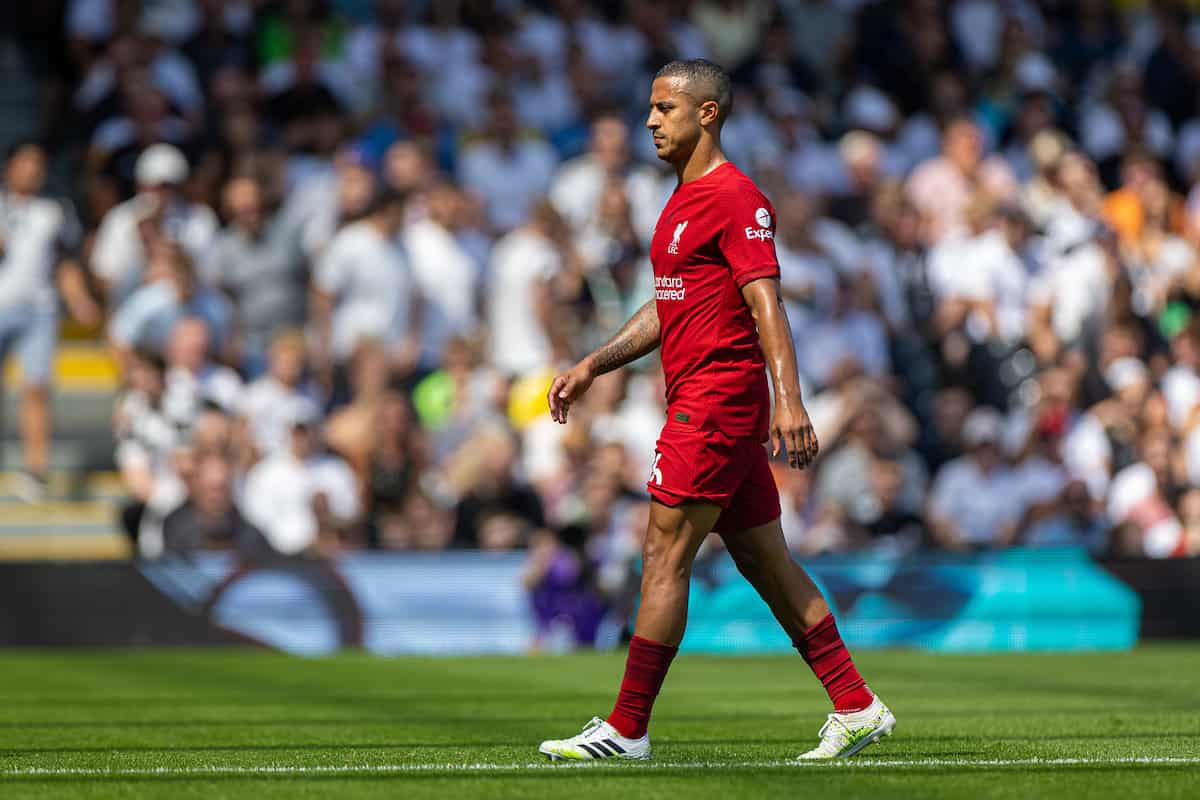 Liverpool were dealt another injury blow as a hamstring issue forced Thiago off in the 2-2 draw with Fulham, and Jurgen Klopp has described it as “not good.”

The Reds went into their Premier League opener with eight first-team players out, including the injured duo of Alex Oxlade-Chamberlain and Curtis Jones, while Naby Keita sat out through illness.

Klopp defied suggestions that Liverpool could dip back into the transfer market to add another midfielder, but another problem emerged on Saturday.

Six minutes into the second half at Craven Cottage, Thiago slumped to the turf and was given treatment before being substituted.

Like Oxlade-Chamberlain and Diogo Jota, it is a hamstring injury for the No. 6, and Klopp gave his immediate thoughts on the situation in his post-match press conference.

Though Liverpool now await a scan to determine the severity of Thiago‘s issue the manager described it as “not good,” but insisted the club would “not panic” and rush to bring in another body.

“Nobody could imagine that Curtis gets the thing he gets,” he told reporters.

“It’s nothing serious, but he’s a young boy and it’s kind of a stress reaction, bodies are like this.

“Naby is only ill, he will not definitely be back next week again. Oxlade happened early and now with Thiago, that’s of course not good.”

On the subject of transfers, Klopp was keen to stress that he still believes Liverpool have enough options, with Fabinho, Jordan Henderson, Harvey Elliott, James Milner and Fabio Carvalho among those available.

“We will see. A transfer must make sense now and in the long term,” he continued.

“And I know, part of the football business is now getting nervous. We are not. But this is not a good situation, I don’t like it at all.

“We have to see how we react to that – for sure, not panicking.”

Fulham 2-2 Liverpool – As it happened