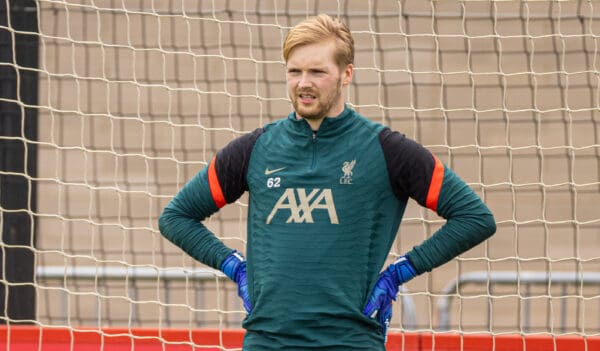 3 players return to training as Liverpool squad reconvene after internationals

Liverpool’s squad have been pictured back together after the international break, with three players returning to action at the AXA Training Centre.

More than two weeks on from their most recent match against Ajax, Jurgen Klopp finally has the vast majority of his squad together again, with the September international break concluding earlier this week.

And with two days until Liverpool host Brighton in the first of 13 games in the next six weeks, the latest training pictures show a number of players who missed the early stages of the season now back in action.

After picking up a groin injury on international duty at the end of last season, goalkeeper Kelleher was back in light training before the international break, and now looks to have returned to full fitness.

Konate is another who hasn’t featured at all this season, after sustaining a knee injury in Liverpool’s final pre-season friendly back in July. He too looks to be back in contention.

It’s also nice to see summer arrival Ramsay back in action, having endured a difficult start to his time as a Liverpool player.

The right-back arrived at the club with a back problem, with the club keen to ensure they did not rush him back to action.

Luis Diaz, Diogo Jota and Darwin Nunez were not pictured in the session, which would suggest they have been granted some extra time to recover following their international exploits within the last fortnight.

Diaz played both of Colombia’s matches against Guatemala and Mexico, and would only have flown back to Merseyside in the early hours of Wednesday morning.

Jota revealed he asked to be substituted in Portugal’s 1-0 defeat to Spain on Tuesday, with the forward keen to manage his workload having recently returned from a long-term hamstring problem.

Jurgen Klopp is likely to provide an injury update in his pre-Brighton press conference on Friday afternoon.