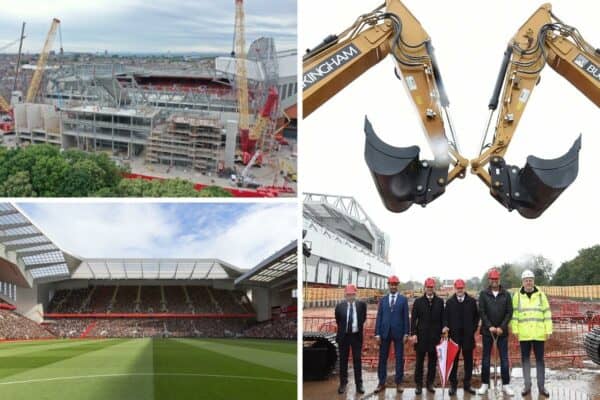 It’s twelve months to the day since Jurgen Klopp stuck a spade in the sand and launched Liverpool’s Anfield Road Expansion project.

Since then, a staff of 750 have worked over a quarter of a million hours onsite so far to make huge progress in the construction, which will bring 7,000 more supporters to Anfield, taking its capacity to 61,000.

The new stand is officially on course to be completed for the start of next season and has delivered many key milestones since the Reds’ boss kickstarted the work on September 30 2021.

Four months into the build the innovative Y-shaped columns were erected to form a safety zone which allows safe operation of the stand and access for spectators on matchdays, whilst construction works continue above.

Since the building work began more than two million people have visited Anfield, including matchdays, concerts and stadium tours.

And in July this year, another significant milestone was reached when the 300-tonne roof truss was carefully lifted into place.

Preparatory work for the truss started in May by building two huge steel towers and then two 60ft haunches were lifted into place ready to sit on either side of the truss.

It took 30 skilled engineers around 12 hours, during record-breaking temperatures, to install the truss using two 600-tonne crawler cranes to take the heavy lifting.

When it was all aligned, the cranes held it in position until it could be bolted in place. The towers, haunches and truss are connected by a total of 25,000 bolts.

The roof truss is connected to the new stand itself, which is being built behind the existing lower tier, with the existing roof expected to be removed during the World Cup in November/December.

And only last week the Anfield Road hoardings have been made over to feature past and present attacking stars.

Now, 12 months after work began, almost two-thirds of the main steel frame on the new Anfield Road Stand have been installed, and a third of the ground floor, level two concourse and terracing in the upper end has been completed.

When it is completed a total of 3,700 tonnes of steel will have been used.

Paul Cuttill, VP of Stadium Operations at Liverpool Football Club, said: “It’s been a very busy twelve months, and its impressive to look back at what has been achieved during the year. When the project started, we had the additional challenge of working with Covid restrictions still in place, and the stadium was still in use as a vaccination centre.

“It’s exciting to see how it’s grown and seeing the plans brought to life. It’s been a huge achievement to carry on the build around a very busy football and concerts schedule. We’re in the final 10 months of the build and it will really start to come to life from this point forward.”

Alongside the build, 15 local school children have been chosen as Young Construction Ambassadors for the project. They have been receiving a detailed look at the build and how it’s progressing on a monthly basis.

The scheme is run by Buckingham’s, the principal contractor, alongside the club’s Red Neighbours team to introduce young people to careers in the construction industry.

This is the third major capital build project undertaken by Liverpool in recent years, following the build of its fantastic new Main Stand in 2016, and the opening of its state-of-the-art AXA Training Centre in November 2020.