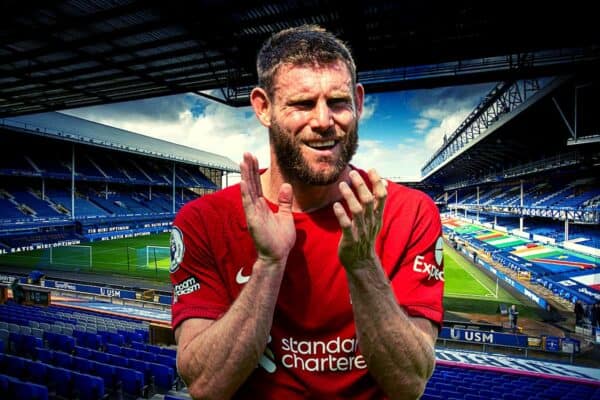 If he scores, Milner will become the oldest Liverpool scorer in a Merseyside derby. He will be 36 years 242 days, taking the record from Garry McAllister (36 years 112 days in 2001).

The Liverpool midfielder could play the 600th game of his league career. He has made more of those appearances for Liverpool than any other team, the next best being Man City on 147.

Only two players aged 17 have ever appeared for the Reds in a Merseyside derby – Michael Owen in 1997 and Raheem Sterling in 2012.

Could the likes of Stefan Bajcetic or Bobby Clark become the third?

A chance to extend a club record

Liverpool have now gone 11 games unbeaten at Everton in the league – a club record (3 wins, 8 draws).

This will be the 241st meeting in all competitions, with 97 Liverpool wins, 67 Everton wins and 76 draws.

It remains the most played derby in the English top division.

In all competitions Liverpool have won more games against Everton (41) at Goodison than they have lost (40), while a win will give them the lead in league games at the ground.

Liverpool won 4-1 here last season, and in the 90 minutes scored as many goals as they had recorded in the previous 7 Goodison encounters.

Can Firmino break another duck?

Roberto Firmino has no goals against Everton in 12 appearances in the Premier League – the most games he has played against any team in his Reds career without scoring.

Last Wednesday he scored his first goal against Newcastle in his 11th appearance.

Mo Salah’s next top-flight goal will be his 121st for Liverpool and will see him move into eighth place outright on the club’s all-time league goalscorers list.

Alisson has kept four clean sheets in his six appearances against Everton – all in the league.

Everton won at an empty Anfield two seasons ago to record their only derby success since 2010.

They’ve had nine players sent off in the last 20 league meetings at Goodison, coming from behind to win a derby only once since the war – in 1992 when Peter Beardsley scored the winner.

In the last 36 games in all competitions, only Romelu Lukaku has scored more than once in a derby for the Blues – in a 3-3 draw at Goodison in November 2013.

Only one Everton goalkeeper has saved a penalty in a league derby – Tim Howard from Dirk Kuyt in October 2011.

He’s overseen one Liverpool win and one draw, with nine yellow cards in his previous two games.