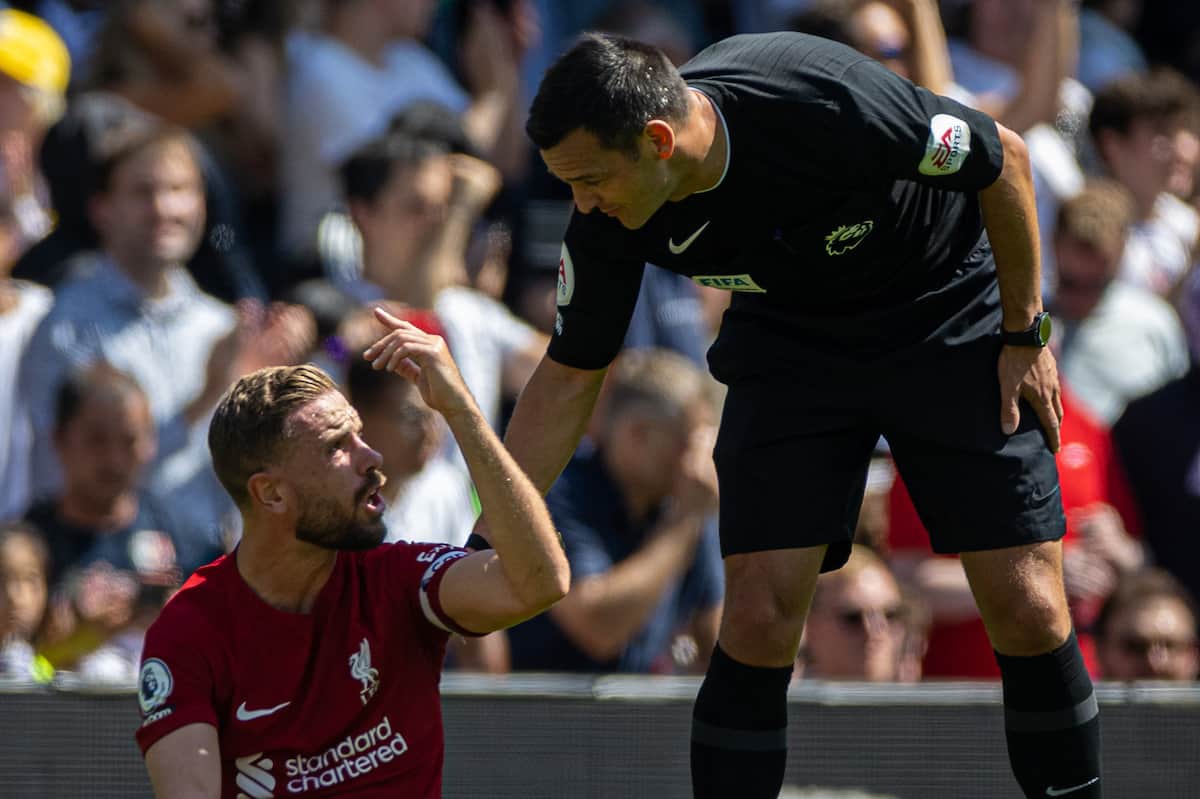 Referee criticised as “absolutely rotten” appointed for Liverpool vs. Wolves

The Premier League have confirmed the officials for the next round of games this weekend, with a referee embroiled in controversy in charge at Anfield.

“It’s a scandalous decision. Absolutely rotten decision from one of the supposedly elite referees.”

Those were the words of David Moyes following referee Andy Madley’s decision – on the recommendation of VAR – to overturn a goal from West Ham‘s Maxwel Cornet to make it 2-2 at Chelsea, due to a perceived foul on Edouard Mendy.

The decision was remarkable, with Jarrod Bowen barely clipping the onrushing Mendy, who Moyes accused of “faking an injury,” and amplified the weekend’s controversy.

“How can you go over to the monitor and call that a foul?” Declan Rice added in his post-match interview. “It’s an absolute disgrace.”

Neither Moyes nor Rice were punished for their comments, which served as acknowledgement that Madley and VAR official Jarred Gillett were in the wrong.

But while Lee Mason – who was criticised for his officiating in Newcastle‘s 0-0 draw with Crystal Palace – has been removed from VAR duties in this weekend’s fixtures, both Madley and Gillett have been appointed for games.

The Premier League have confirmed that Madley will be referee for Liverpool vs. Wolves at Anfield on Saturday, despite his clear fault only a week previous.

It is not the first Liverpool game Madley has been in charge of this season, with the 39-year-old also referee for the 2-2 draw at Fulham.

Overall, he has refereed Liverpool on six occasions, resulting in five wins and a draw for Jurgen Klopp‘s side – including victories over Palace, Leicester and Cardiff last season.

It should be noted that there were also issues with VAR during the Merseyside derby at Goodison Park, with Virgil van Dijk arguably deserving a red card for a challenge on Amadou Onana.

VAR that afternoon was Darren England, who has been appointed fourth official for Man City vs. Tottenham on Saturday evening.