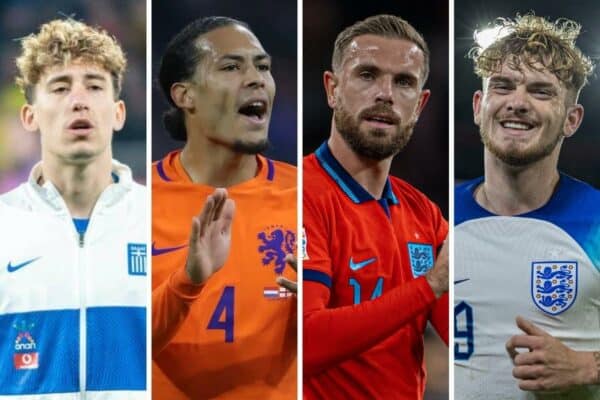 A total of 12 members of Jurgen Klopp‘s first team were called up for international duty this month, and it was a mixed bag when it came to the minutes they each played.

Liverpool’s season was yet to truly get up and running prior to the September break, not helped by two league postponements, but there was not to be any delaying the internationals.

It was a smaller international contingent than usual for the Reds thanks to a number of injuries, and only 10 of the 12 senior players went on to feature in either friendly or Nations League action.

Mohamed Salah was released early and, thankfully, no injuries emerged from the break – hallelujah!

Here is a breakdown of what unfolded during the final international break before November’s World Cup.

Liverpool had players sitting at both ends of the spectrum for minutes played this month, with a handful playing two full games and others not seeing a single minute of action:

As for goals scored, three forwards were on the scoresheet, two ending long runs without a strike by doing so:

There were 17 senior players that stayed behind after not receiving a call up, eight due to injury and two retirees from the international stage:

And while both Trent Alexander-Arnold and Roberto Firmino were part of their country’s squads, neither played a minute for England and Brazil respectively.

It will come as a disappointment on an individual level, but for Liverpool, it’s a boost ahead of a relentless run of fixtures before the World Cup, with 13 games in 42 days.