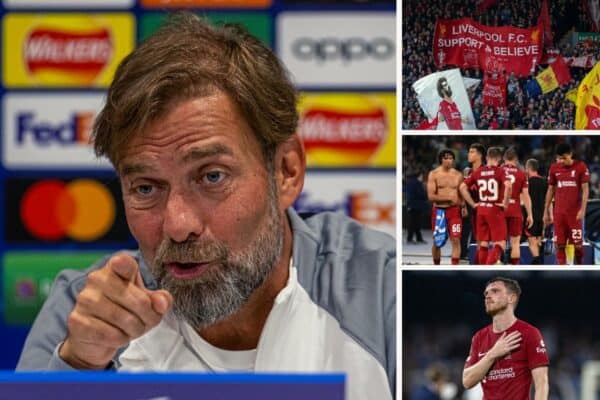 Jurgen Klopp did not hide from the “horrow show” that was Liverpool’s last performance as he spoke of what has unfolded in the days since and the need for a response vs. Ajax.

Here are five key points from the manager’s press conference ahead of Tuesday’s game:

A “horror show,” that was certainly one way to put the Napoli defeat, Jurgen!

With an enforced break after the Napoli game, there has been plenty of time to reflect and the manager did not hold back in his assessment of that match and what has happened since.

“A lot of thoughts, meeting with the players. I’ve watched the game back plenty of times, a real horror show. Showed the boys the situation and they knew but it made it,” Klopp said.

“Worst game since I’m here, and we’ve had a few bad games, Aston Villa and some others but there were always some glimpses of us, in this particular game nothing.

“You have to understand why this happens. Eight out of eleven were absolutely below the level they can play and three others were not on top level, just their normal game.”

And now ‘we have to respond’

There can be no denying that the Reds need to show a reaction on Tuesday, nothing less will be expected at Anfield from the manager, players and fans alike.

“We have to show a reaction, definitely. That doesn’t guarantee a result, Ajax are pretty much in an opposite situation having won all their games,” Klopp said

“First and foremost we have to show we all have the same idea.

“We have to respond, for this we had to talk, we had to show and we had train – and that’s what we did.”

It won’t be easy with Ajax winning their last seven matches, but the turnaround can start here.

There has been a bit of confusion surrounding Naby Keita after he was named in Guinea’s squad for the upcoming international break despite his injury.

Keita was not named in Liverpool’s Champions League squad and that made it clear just how long-term his thigh injury is, and Klopp reiterated just that as he cleared up some confusion.

“No, I don’t expect him to go on international duty,” Klopp told reporters.

“The expected return date was somewhere in October, that’s why we had to make the decision. With Ox it’s the same.

“That’s why the two boys are not in the Champions League squad, because after the expected return date, which can always differ a little bit, bit earlier, stuff like this, [it takes time].

Andy Robertson is the latest player to fall victim to the injury curse and will be out “until at least after the international break” after picking up a knee injury at Napoli.

The hope is that he can use the international break to recover and be back without delay, with the silver lining being that he will not add further minutes to his legs with Scotland this month.

The good news, though, is that Fabio Carvalho “trained normally” after missing Napoli with a dead leg and “will be available,” but Curtis Jones remains sidelined.

Why does it feel like one comeback always has to result in another injury?!

There will be a minute’s silence before kickoff to pay tribute to Queen Elizabeth II after her death last week and Klopp had the perfect response to a question pertaining to ‘advice’ for Liverpool fans.

“It’s the right thing to do. But I don’t think our people need any advice from me about showing respect.

“There are plenty of examples where our people showed exactly the right respect, one that really surprised me, and I was really proud of that moment, was last year when we played Man United around a very sad situation for Cristiano Ronaldo’s family.

“For me, that’s clear that’s what we have to do… I will show my respect tomorrow night with a minute’s silence.”