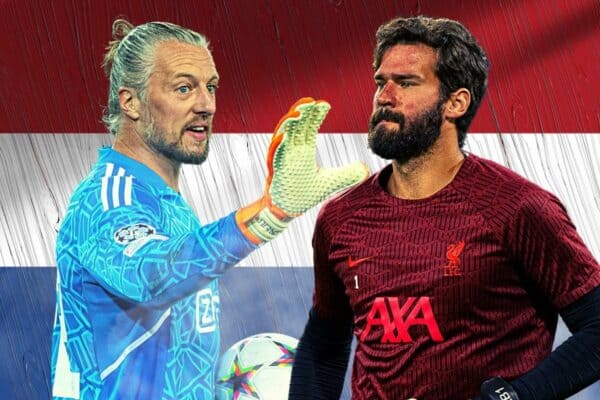 10 key things to know ahead of Ajax vs. Liverpool

Liverpool head to Amsterdam on Wednesday night looking for early passage through to the Champions League‘s last 16. Here’s all you need to know.

After frustration in Nottingham, Liverpool will look to get back on track and take a big step forward in Europe as they visit Ajax.

Here are 10 key things to know as the Reds push for the last 16.

Wednesday’s clash takes place at the Johan Cruyff ArenA, renamed from the Amsterdam ArenA in 2018, in tribute to the late Dutch legend.

Liverpool have only played Ajax once at the stadium in a competitive game, that being a behind-closed-doors 1-0 win in the Champions League group stage in the pandemic season of 2020/21.

Fabinho partnered Joe Gomez in defence that night, with the tie decided by an own goal from Nicolas Tagliafico.

There have been two friendly meetings between the two sides in Amsterdam, too, with a 3-1 defeat in 2001 and a 0-0 draw two years later.

Oh, and there was also the absolutely wild 6-a-side mid-season tournament in 1997, read all about that here!

2. What Liverpool need to qualify

It is pretty simple for Liverpool this time around: get at least a point, and they are through to the last 16.

Defeat would mean they could need a result when they host Group A leaders Napoli on November 1, though they head into Wednesday’s clash already six points clear of Ajax.

3. Ajax are in hit-and-miss form

After a 3-1 victory over RKC Waalwijk on Saturday, Ajax hold a four-point lead at the top of the Eredivisie, on a run of three consecutive league wins.

However, they have lost three out of four games in the Champions League, scoring eight goals and conceding 12, while they are without a clean sheet in the last eight in all competitions.

Ajax have shipped 19 goals in that time, including 10 over two games against Napoli and two in defeat to Liverpool at Anfield.

Tuesday brought the good news that Darwin Nunez is back following a tight hamstring, with the No. 27 in contention to start.

Joining him in training were Naby Keita and Ibrahima Konate, with the pair resuming full training following their respective injury issues the previous day.

5 …but Thiago is still out

Absent, though, was Thiago, with the Spaniard not pictured with the squad after having been taken to hospital with an ear infection on Saturday morning.

It is almost certain that Thiago will miss out, along with Luis Diaz, Joel Matip, Diogo Jota and Arthur, while both Keita and Alex Oxlade-Chamberlain are ineligible for the group stage.

It is a difficult balancing act for Jurgen Klopp at this stage, but with a game every three days on average ahead of a break for the World Cup, rotation is necessary.

Of late, the manager has opted for five changes between games, and that could well be the case on Wednesday night, particularly given the relative lack of jeopardy in Group A.

Trent Alexander-Arnold and Jordan Henderson are likely to come in along with Nunez, while the likes of Kostas Tsimikas and perhaps even Konate could be options, too.

Wednesday will bring a landmark night for Alisson, who is set to make his 200th appearance for Liverpool in all competitions.

Mohamed Salah is only two goals off Steven Gerrard’s all-time European goalscoring record, with 39 to the legendary midfielder’s 41.

The Egyptian is already Liverpool’s leading scorer in the Champions League, having surpassed Gerrard’s tally last season, but could cement himself at the top of the overall pile this season.

Another hat-trick for Mo?

There will be a first-time referee for Liverpool on Wednesday, with Spanish official Jose Maria Sanchez taking charge of his first Reds game.

He has, however, been in charge of an Ajax game in the past, that being a 5-1 thrashing of Sporting CP in last season’s Champions League.

Ajax vs. Liverpool is being shown live on BT Sport 2 in the UK, which is available to live stream here.

Kickoff is at 8pm BST, with coverage starting at 7pm.

This Is Anfield will be providing live updates, reaction and analysis throughout, with Sam Millne keeping you informed and entertained from 7.15pm.