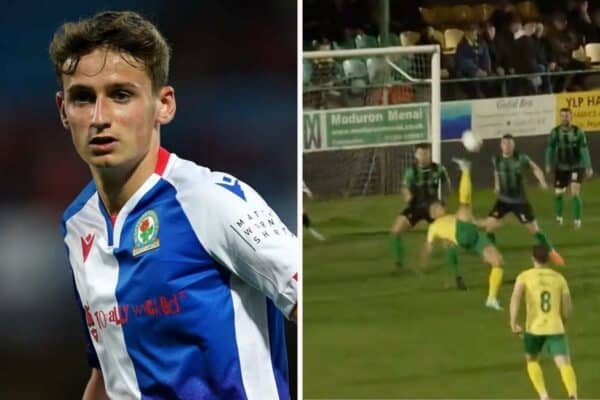 Tyler Morton continues to go from strength to strength in the Championship and 20-year-old Fidel O’Rourke scored a stunning bicycle kick, but the weekend was not as kind to Vitezslav Jaros.

Morton has been an integral part of Blackburn’s push for promotion back to the Premier League this season, starting 11 of their last 12 league matches.

The most recent of which saw him notch his first assist of the Championship campaign against Birmingham City, dispatching a low pinpoint cross for Sam Gallagher to finish from close range.

It was the opener for Rovers in a 2-1 victory, with Morton playing the full 90 minutes as the deepest-sitting midfielder, with LancsLive‘s Elliott Jackson saying he “looks really in the groove now as a Blackburn player.”

The victory is Blackburn’s third in a row and, while having played a game more than their closest rivals, has them placed second in the division with 30 points from 17 games.

O’Rourke raised the stakes from Morton’s classy assist with a stunning bicycle kick goal in a 2-1 win for Caernarfon Town, that on another day could’ve seen the youngster walk away with the match ball.

The 20-year-old opened the scoring for his side before a wayward shot at the far post with the goal begging and he then had an effort cleared off the line – a game of fine margins.

It was O’Rourke’s second start in a row and makes it two goals in two games for the young forward, who has now found his feet in his first career loan spell.

Vitezslav Jaros, on the other hand, was forced off the field with injury after just 38 minutes in Stockport’s 2-0 win over Salford.

The goalkeeper took a hard hit to his lower back as he and an attacker both made a move on the ball, ending his day early to give Ben Hinchliffe rare minutes between the posts.

Elsewhere, Leighton Clarkson played 84 minutes in Aberdeen’s 2-1 victory over Motherwell, while Adam Lewis was back in Newport’s XI for a 1-0 win against Colchester United.

In total, nine of Liverpool’s loanees were handed minutes throughout the last round of fixtures, while seven youngsters missed out, four of those due to injury.