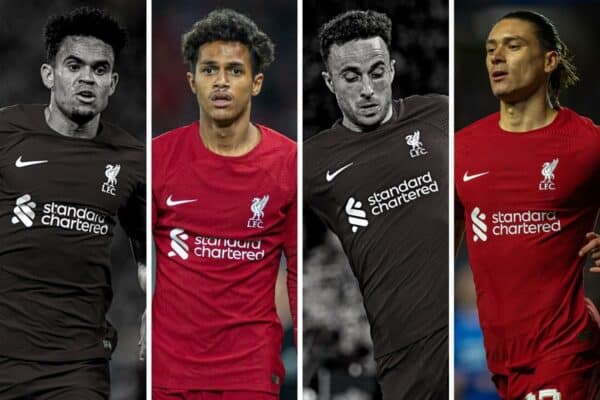 With Luis Diaz and Diogo Jota both expected to be out for the long term, Jurgen Klopp has a space to fill on the left of his Liverpool attack.

Four games into Klopp’s new 4-4-2 system, and Liverpool are now facing a lengthy spell without two of its key components.

Diaz is set to miss the remaining games before the World Cup with a knee injury suffered in the 3-2 loss to Arsenal, while Jota is now likely to be out for a similar timeframe with a calf problem picked up in the 1-0 win over Man City.

It is a far-from-ideal situation, with Jota having already taken over Diaz’s duties on the left only to now join the Colombian on the sidelines.

That leaves Klopp with a decision to make over his next starter on the left flank – here are four options to consider after two big setbacks.

The obvious solution is the next in line in the pecking order, with Carvalho having already made three of his 11 appearances for the club on the left-hand side.

One of those came in the 4-4-2 system, earning the praise of his manager for a mature display both on and off the ball in the 7-1 thrashing of Rangers.

“The two kids, right and left wing, really good, Fabio and Harvey,” Klopp said after the win at Ibrox, later noting that Carvalho and opposite number Harvey Elliott were “really involved” in their defensive duties.

That suggests Klopp would have no concerns over the 20-year-old’s work rate in front of his left-back, while there is little questioning the scope of his potential as an attacking talent.

Another young option on the left is one who has only just returned from a long spell out through injury, with Jones back on the bench for the victory over Man City for the first time since August.

Jones is yet to feature since the Community Shield, so is left to make up for lost time in a system that, on face value, has less room for him than there was when he was last a regular.

But it cannot be overlooked how outstanding a talent Jones was on the left during his breakout spell in the academy, allowing him to dazzle, create, score and often serve as the pressing trigger in attack.

Though predominantly a central midfielder at first-team level, Klopp has used his No. 17 sparingly as a left winger, and the slightly more reserved role in the 4-4-2 could be a perfect blend for Jones’ abilities.

Mohamed Salah has made a convincing case to keep his place as central striker in the 4-4-2, which leaves Nunez at a loss despite scoring in two of the last three games.

There is the option of pairing Nunez and Salah, of course, as was the case late on against City, but Roberto Firmino remains a reliable option in the slightly deeper, link role.

Instead, Klopp could look to keep the Uruguayan in the side via his less-favoured but still comfortable position as a left winger.

He is often used out wide at international level, while he netted a remarkable 10 goals in five games on the left for Benfica, including two hat-tricks, and Klopp has listed him as a wide option previously.

Just expect a little bit more chaos if he does opt for Darwin!

There is also the possibility that, two wingers down, Klopp now reverts to his 4-3-3 formation.

While not an all-out-attacking system, the 4-4-2 does effectively require four forwards on the pitch at any given time, and now there are only five – or six if Jones is factored in – currently fit.

Returning to a three-man midfield would, in theory, reduce the workload on those attackers who are still available.

But at what cost?

The 4-4-2 has proved hugely effective so far, with three victories and a close-fought defeat, and there are signs that Liverpool are only going to improve with more time on the pitch in this setup.

Much may depend on the fitness on those left standing, and those on the brink of returning like Alex Oxlade-Chamberlain, but the hope is that Klopp simply opts to replace Diaz and Jota and stick with his guns.